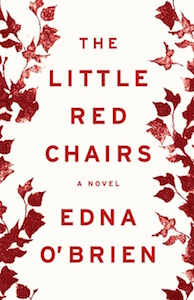 The following is from Edna O'Brien’s novel, The Little Red Chairs. Edna O'Brien, author of the Country Girls trilogy, A Fanatic Heart, The Light of Evening, Saints and Sinners, and other widely acclaimed books. Her memoir, Country Girl, received the Argosy Irish Nonfiction Book of the Year prize from the Irish Book Awards. Born and raised in the west of Ireland, O'Brien has lived in London for many years.

Fifi wakened hearing voices. It could only be John, John dead almost three years and still paying his regular visits, ‘channelling’ as he would call it. He might as well be alive, she could picture him so clearly, with his tousled black hair, wild black eyes and the old green jersey with strings hanging off the sleeves, spouting the mysteries of the Divine, of which he was an initiate.

She never feared his ghost, it could only be an influence for good. They were soulmates, both having travelled the wide world, returning from their wanderings, to the sea mists and the ground mists, the Fomorian darkness as he termed it. There was nothing romantic of course, as she ruefully admitted to being ‘a dried-up old bird’ from all that sunshine in Australia, whereas John with his shock of hair and his wild eyes was still Orpheus, singing to some lonely Eurydice, whoever she may be.

Ah, the high-flow glorious nonsense of those times.

For two years he lived under her roof, in the back bedroom, which he named Manaan Mac Lir, Son of the Sea and God of the Sea. He did rough work, digging and hoeing, quite content to do it since it kept him close to nature, and pursued his mystical studies at night. The original agreement was for bed and breakfast, but with time things changed and moreover, he would bring back a hare or some trout and she would cook for him and they would sit and talk at the kitchen table, John expounding on God, paganism, Gaia, and St John of the Cross. Often he would contradict himself, saying that the way to religion was to have no religion at all and they would almost come to blows at the kitchen table, shouting one another down, regarding the authenticity of the Virgin Birth and the Resurrection of Christ. She was a believer but for John, poetry was the true faith.

He disapproved of her summer visitors, camped out in the bog or by the seashore and gave the odd seminar at summer schools, which she was too busy to attend. Her guests came back year after year, some for the fishing, some for the shooting or festivals that went on all year round, along with nature walks and God knows what else.

Her breakfasts were legendary, with all the troupe, minus John, at the long oak table, her best bone china, cotton napkins warm because she would have just ironed them, then folded them to look like a large envelope with the letter flap turned over, exactly fitting into the space between the arrangements of silver cutlery. They came down to the smell of warm potato bread and scones, honey from her own hives and marmalades and jams of different flavours. She dragooned them to eat those breakfasts whether they wanted it or not and then sent them out on their various pursuits.

Leaving her little ‘ashram’ as John called it was the great mistake of his life, because he died not long after and she always maintained that he had died of homesickness. It so happened that a nearby pub, shut down for many years, was auctioned, done up and reopened, so that the noise of cars and revelers late at night drove him insane. She could hear him in his own bedroom cursing, shouting at being hauled out of his paradisal dreams. He went south to where he thought he would find peace only to learn that a disused quarry was reopened and after that it was the noise of men and machinery all day long.

‘So what have you to say to me John?’ she asked sitting up in bed and pulling on a cardigan as the room was freezing. With her big toe she pressed on the button of the floor lamp and then got into her snug pink slippers. Going down for the first cup of tea, she envisaged Bibi, her little dachshund, with her wiles, waiting for the first saucer of milk with half a spout of tea in it. Like a human Bibi sensed things, knew that her mistress was soon going away and kept bolting at the slightest opportunity. January was the month to close the shutters and go for a week over to Leenane, to Mickey the basket weaver, to learn again how to make cribs and baskets from willow.

The doorbell took her by surprise – Closed for the season was printed on a cardboard sign and left on the inner ledge of the conservatory window. She went out holding the brown egg, that she might or might not boil for breakfast and seeing the bearded figure in the doorway, like a picture of Moses, she remembered the craic in the pub the night before and rued the fact that she had mixed gin with Irish coffees.

‘Good morning . . . Dara should not have sent you,’ she replied tartly. There was silence for a moment as he admired the view, the river as it sprawled out into a broad sweep, eel nets, creels for the crab and the lobsters, and two swans so sedate, as if they were made of china. The hazed horizon seemed to be resting itself on the mountain tops.

‘January is the month I do all the painting and redecorating,’ she said by way of apologising for refusing him.

‘Your house is most unusual,’ he said.

‘Ach it’s tumbling,’ she said but she was proud to hear it. Her house was two-storey in one part, single-storey elsewhere, with a crescent-shaped conservatory and ruins of cottages to one side. There was a front garden with ornamental shrubs and a back garden that rose in a steep incline to the woods. It was fifteen years since she acquired it, the cottage that her ancestors had left, the walls sprouting mushrooms and toadstools, cockroaches wherever she stepped and yet she knew that somewhere distantly, a man or woman born there, into hardship, was responsible for the peppery glints in her hazel eyes and her scalding temper.

It was a crisp bright morning, sun glinting on the bushes and on a few straggling dog roses that had survived the winter, the green snouts of the crocuses poking through the clay. She brought him around to show the lime walk, the apple orchard and the beautiful sun dial with its verdigreed peacock, that had come from a grand house in County Wicklow. Pointing to the ruins of three cottages, she said that one day she would make them into artists’ studio apartments. Suddenly she looked around and there was no sign of Bibi. Bibi had run away and little snob that she was, probably to the Castle grounds to mix with the noblesse. First she rang the Castle, only to be told there was no sign of Bibi, and she ran hither and thither, calling and coaxing, then blew a whistle that made a shrill, peremptory sound. Bibi, she feared, could be stolen or poisoned, because many people coveted her.

He helped in her search and soon it was up into the woods, where they moved stealthily, listening for any little stir. By the base of a birch tree, he noticed that leaves had been disturbed and a small seam of earth opened up. He stooped to listen and said he could hear some movement.

‘Why isn’t she coming out?’

‘Mother nature,’ and he explained how most likely, she had gone down the burrow on the scent of a rat or a stoat, with all her senses quickened, so that she could get through the eye of a needle, because she wanted to. But coming back up was a different matter altogether. The adrenalin was gone. It was lucky, as he said, that they had come so soon, because if she were there for days until she got thinner, so as to squeeze her way through, she would probably die of thirst.

He worked the spade gently, until the frozen clay began to shift and then with a trowel he kept digging, carefully, so as not to break any bones and when the seam had opened sufficiently, he put his hands in and eased her out. She looked like a rag, muddied, one ear torn, and quivering all over.

‘My little rambler,’ Fifi said and cradled her in her arms and they walked back in silence. They stood her in a tub of warm water, Fifi washing and sponging, while he cut all the toenails broken from scraping. She was still quivering, as if she did not know where she was and she flinched at having the clay taken out of her nostrils with tweezers.

He was soon made welcome, admiring the things in the kitchen, the old-fashioned dresser painted green, the different cups and shaving mugs, plates wedged in at the back and jam dishes of a milky Vaseline glass, partaking of a hearty breakfast.

She sat across the table from him, cutting the willow rods into near-identical pieces, while sizing him up. He was a handsome man, and no doubt about it, a swell, the scarlet silk handkerchief in his top pocket complementing the more muted red of his silk tie. Somehow she got talking of John and what an inspiration he had been and on impulse, she fetched the shoe box with pictures of him, smiling the minstrel smile, sayings that he had copied from the Upanishads and things he himself had written. The visitor read them, clearly impressed, and then read them aloud:

Oh my mother Asia of the Heart Sutras, guide me.

Let us return to the Bird Reign of Conaire Mor in which all things live Ecumenically with each other, man and beast uniting with nature in the Divine scheme of things.

‘He did . . .’ she said proudly but before things got too spiritual altogether she said John could be a demon with drink and described him in his cups on Friday nights, with Fergal, another Orpheus, both on the one bicycle, stopping at the hill by the eels’ bed and Fergal saying, ‘You’re nearly home John,’ and John answering, ‘I am, but am I on the otter’s way?’

In the Manaan Mac Lir room, he looked out, as John had so often looked, at the apple trees, the ruins of the cottages and the wood where the little birches had withstood the ravages of many winters.

‘We are now in the Silence,’ he said and the sight of him standing there, so solemn, so episcopal and yet masculine touched her in some forgotten way.

He said then, how enjoyable, how enriching the morning had been and that he would not forget it. It was all it took to sway her.

They settled on a price of one hundred euros per week and as fortune had it, he could now look after Bibi and her six hens, while she kept her promise to go over to Mickey in Leenane.

She watched him go down the path, lithe, straight-backed and thought that the ladies of Cloonoila, married and unmarried, would be doffing their bonnets at him.

‘It’s for you John,’ she said, in a rare admission of loneliness.

From THE LITTLE RED CHAIRS. Used with permission of Little, Brown and Company. Copyright © 2016 by Edna O’Brien. 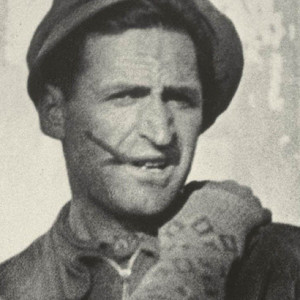 Five Books Making News This Week: Debuts, Icons, and Poets Ten emerging playwrights, poets, writers of fiction and nonfiction—win $50,000 Whiting Awards this week. Among them, J.D....
© LitHub
Back to top