The Life to Come 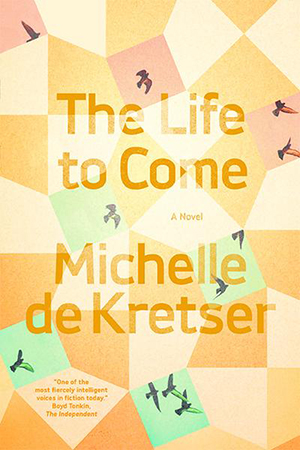 The following is from Michelle de Kretser's novel, The Life to Come. Traveling across three continents, Pippa is an aspiring writer meeting people who, like her, are struggling with intimacy, identity, and ethnic and class conflict. Michelle de Krester is an Australian novelist who was born in Sri Lanka. Her previous novels include Questions of Travel, which won the Miles Franklin Award, and The Lost Dog, which was longlisted for the Man Booker Prize.

The house by the river belonged to an old man whose relationship to George Meshaw was complicated but easily covered by “cousin.” He had lived there alone, with a painting that was probably a Bonnard. Now he was in a nursing home, following a stroke, and George’s mother had taken charge of the painting. It was her idea that George should live in the house until it was clear whether or not their cousin was coming home. She had flown up to Sydney for the day, and George met her for a late lunch. George’s mother wore a dark Melbourne dress and asked the waiter for “really cold water,” between remarking on the humidity and the jacarandas—you would never guess that she had lived in Sydney for the first thirty-one years of her life. She bent her head over her handbag, and George found himself looking at a scene from childhood. His mother was on the phone, with the orange wall in the living room behind her. As he watched her, she bent forward from the waist, still holding the receiver. Her hair stood out around her head: George saw a dark-centered golden flower. He couldn’t have been more than six but he understood that his mother was trying to block out the noise around her—he folded like that, too, protecting a book or a toy when “Dinner!” was called—and that this was difficult because the room was full of the loud jazz his father liked to play.

Over the years, George’s mother’s hair had been various colors and lengths, and now it was a soft yellow sunburst again, still with that central dark star. She produced a supermarket receipt from her bag and read from the back of it: “Hair Apparent. Do or Dye.”

They were in the habit of noting down the names of hairdressing salons for each other. His mother said, “Also, I saw this in an airport shop: ‘Stainless steel is immune to rust, discoloration, and corrosion. This makes it ideal for men’s jewelry.’”

George and his mother had the same high laugh—hee hee hee—and otherwise didn’t resemble each other at all. The Bonnard was beside her, done up in cardboard and propped on a chair. When George asked what it was like, his mother said, “A naked woman and wallpaper. He needed an excuse to paint light.”

The house by the river was spacious and built of bricks covered in white render. It was late spring when George moved in, but the rooms on the ground floor were cold and dark. There were mortuary-white tiles on the floor, and the lights were fluorescent tubes that looked as if they would be fatal to insects. They had to be switched on even in the middle of the day. George remembered that his mother had described the house as “Mediterranean.” Ridiculous secondhand visions—a turreted pink villa with terraced gardens, a bowl of red fish at a window—had opened at once in his mind.

He had been back in Sydney for four years and still swam gratefully in its impersonal ease. In Melbourne, where George had lived since he was six, he had wanted to write about modernism in Australian fiction for his Ph.D. After some difficulty, a professor who would admit to having once read an Australian novel was found. At their first meeting, she handed George a reading list made up of French and German philosophers. When George settled down to read these texts, he discovered something astonishing: the meaning of each word was clear and the meaning of sentences baffled. Insignificant yet crucial words such as “however” and “which”—words whose meaning was surely beyond dispute—had been deployed in ways that made no sense. It was as unnerving as if George had seen a sunset in his east-facing window, and for a while it was as mesmeric as any disturbance to the order of things. When despair threatened, he transferred his scholarship to a university in Sydney. There, George read novels and books about novels and was wildly happy. He taught a couple of tutorials to supplement his scholarship. Recently, with his thesis more or less out of the way, he had begun to write a novel at night.

A loggia with archways ran along the upper floor on the river side of the house. That was where George ate his meals and sometimes came to sit very early, as the park detached itself from the night. Koels called, and currawongs—the birds who had whistled over his childhood. Fifteen minutes by train from the center of the city, he lived among trees, birdsong, Greeks. The Greeks, arriving forty years earlier, had seen paradise: cheap real estate, sunlight for their stunted children. Fresh from civil war and starvation, they were too ignorant to grasp what every Australian knew: this was the wrong side of Sydney. Where was the beach?

“George and his mother had the same high laugh—hee hee hee—and otherwise didn’t resemble each other at all.”

There were mornings when George left the house at sunrise, crossed the river, and turned in to a road that ran beside the quarried-out side of a hill. The sandstone was sheer and largely obscured by greenery: giant gum trees fanned against the rock, and native figs, vines, scrub. Brick bungalows cowered at the base of the cliff and skulked on the ridge above—it seemed an affront for which they would all be punished. In the moist, gray summer dawns, George felt that he was walking into a book he had read long ago. The grainy light was a presage. Something was coming—rain, for certain, and a catastrophe.

Opposite the quarry, on the river side of the street, driveways ran down to secretive yards. They belonged to houses that faced the river, with lawns sloping to the water. A sign warned that the path here was known to flood. But bulky sandstone foundations and verandas strewn with wicker furniture soothed—these houses were merely domestic, nothing like the foreboding on which they turned their backs.

After Pippa moved in, George often came home from his walk to the smell of coffee. They would drink it and eat Vegemite toast on the loggia, and then George would go to bed. Pippa, too, kept irregular hours. Saving to go overseas, she was juggling waitressing with part-time work in a sports store, and George could never be sure of finding her at home. That was fine; the idea was that they would live independently—at least so it had been settled in George’s mind. In her second year at university, Pippa had been in his tutorial “The Fictive Self”: a Pass student whose effortful work George had pitied enough to bump up to a Credit at the last moment. Not long ago, he had run into her near the Reserve Desk at the library. Her hair lay in flat, uneven pieces as if something had been chewing it. As the year drew to a close, a lot of students looked like that: stripey and savage. She had only one essay left to write, “in my whole life, ever,” said Pippa. A peculiar thing happened: she held out a piece of paper, and George feared he would see a note that began, Help! I am being held prisoner . . .

It was an invitation to a party. Pippa shared a house in Coogee with a tall, ravishing girl called Katrina. When George arrived, Katrina was standing by the drinks table on the side veranda, talking about her cervix. He placed his six-pack in a plastic tub of ice, and Pippa told him a few people’s names. George had left Marrickville on a warm day, but by the time he crossed the city, a southerly had got up. Every door and window in Pippa’s house stood open. The dim corridor and all the rooms were full of cold air. In his T-shirt and loose cotton trousers, George moved from one group of people he didn’t know to another, trying to get out of the draft. The girls didn’t seem to notice it. They were Sydney girls, with short skirts and long, bare arms. Recently, George had gone to an opening at a gallery in the company of a visiting lecturer from Berlin. The artist was fashionable, and the gallery’s three rooms were packed. Over dinner, the German woman expressed mild astonishment at the number of sex workers who had attended the opening. “Is this typical in Australia?” she asked. George had to explain that she had misunderstood the significance of shouty makeup, tiny, shiny dresses, and jewels so large they looked fake. Eastern suburbs caste marks, they identified the arty, bookish daughters of property developers and CEOs. George was still adjusting to them himself, after Melbourne, where the brainy girls wore stiff, dark clothes like the inmates of nineteenth-century institutions, with here and there an exhibitionist in gray. Pippa had stick limbs, that chewed fringe, a sharp little face. She would have made an excellent orphan: black sacking was all that was needed, and heavy, laced shoes. But she came out of the house in scarlet stilettos and leopard-print satin, and found George on the back patio. He had taken refuge there, in the lee of the kitchen door.

Ashamed to mention cold to this waif, George conjured a headache. Pippa offered Tiger Balm and the use of her room. The windows there were open: Katrina could be heard describing a minor surgical procedure on her ovaries. But when George shut the door and lay down, he was out of the wind at last. A long painting, purple and blue swirls, hung on the wall facing Pippa’s bed—George closed his eyes at once. Long ago, his mother had been a painter. A few survivors from that era—severe, geometric abstractions—could be seen in her flat in Melbourne, but for a long time now her involvement with art had been confined to the upmarket school where she taught.

George fell asleep. When he woke, Pippa was there on the end of the bed, unbuckling her sandals. She flexed her toes, then sat sideways and swung her feet up. They were small, chunky feet, George noticed, and her toenails were painted blue. Katrina passed down the corridor, saying something about her menstrual cycle. George wondered what she was majoring in. Gender Studies? Performance Art? Obstetrics?

“Communications,” said Pippa. She was drinking bubbly; it was the late 1990s, so people still called it champagne. The soft white plastic cup dimpled under her fingers, and Pippa remarked that she was stuck. The house would shortly be reclaimed by Katrina’s aunt, who was returning from Singapore. Another house had been found for the girls—Katrina’s family had several at their disposal—but it wasn’t available before the beginning of March. Katrina was moving home for the summer, but there were reasons why that wasn’t an option for Pippa. George told a lie about the purple painting and learned that it was the work of Pippa’s boyfriend, Vince. “He’s back at his folks’ place in Mudgee, to save money so we can go traveling next year.” She spoke of “Asia,” of “Europe,” collapsing civilizations in the sweeping Australian way.

From The Life to Come. Used with permission of Catapult. Copyright © 2018 by Michelle de Krester. 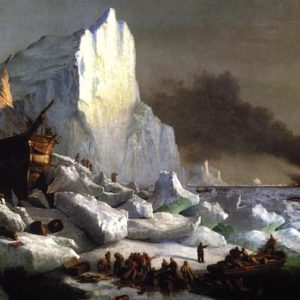 How Polar Explorer Ernest Shackleton Became an International Celebrity “The fascinating thing about Mr. Shackleton’s report,” the New York Evening Globe commented one day after its publication...
© LitHub
Back to top