The Life of Afong Moy, the First Chinese Woman in America

Contending with the Orientalist Fears and Fantasies of a Young Nation

In 1834 Afong Moy was the first recognized Chinese woman to arrive in America. Through the course of her travels across the country, she became the first Chinese person to receive wide public acclaim and national recognition. While her fame was short-lived, she introduced Americans to China through her person and the goods she promoted.

During the 17 years of Afong Moy’s visible presence in America, her treatment as a Chinese woman varied over time. When she first arrived, the public generally responded to China in a positive way. On the edge of patrician orientalism, the perceived “Orient” was one of exoticism, beauty, dignity, and revered history. The Carnes merchants, Francis and Nathaniel G., and the ship captain Benjamin Obear, who brought Afong Moy to America, took advantage of this perception, using the sensual stimulus that came from marketing China trade goods with an exotic. They played on, controlled, and mediated the public’s consciousness of her visual difference—her bound feet, Chinese clothing, and accessories—all to promote their goods.

In the second phase of her experience in the later 1830s, Afong Moy made a transition from a promoter of goods to that of spectacle. During this time, she experienced the conjoining of two worlds—that of the market and the theater. Afong Moy operated simultaneously as entertainment, edification, and billboard. Her new manager occasionally set her against a panoramic backdrop of an illusionistic oriental scene, thus highlighting her cultural exceptionality through her clothing, objects, and images.

Afong Moy’s arrival in a period of great upheaval in American cultural and economic life placed her in the crosshairs of slavery, Native American removal, the moral reform movement, and ambivalent attitudes toward women. On her three-year journey from 1834 to 1837 throughout the mid-Atlantic, New England, the South, Cuba, and up the Mississippi River, her race provided an occasion for ridicule, jingoism, religious proselytizing, and paternalistic control.

After a heart-rending, eight-year interregnum out of the public eye, Afong Moy once again took to the stage in the late 1840s and early 1850s. P. T. Barnum, the master marketer of difference, became her manager. He recognized her promotional value as the only Chinese woman in America whose bound feet, clothing, objects, and experience signified an “orientalist” presence that might titillate the American public. Afong Moy’s time in America provided an additional benefit to Barnum: she no longer needed an interlocutor. Though occasionally she required an interpreter, her language skills were likely sufficient for most audience interactions. On stage she provided evidences of her dissimilarity from the use of chopsticks to the demonstration and explication of Chinese religious rituals.

Through Afong Moy’s presentations the contrasts and vast differences between the East and the West became obvious and the result often gave rise to an arrogant response from the public.

Yet with the passage of time, and with new views of China made possible with the opening of four additional Chinese ports in the later 1840s, public sentiment regarding China had become less accepting. Derisive and mocking commentary in the press and on Afong Moy’s presentation on the stage became more prevalent. The public began to form stereotypical views of the Chinese as backward, arbitrary, undemocratic, and sometimes cruel. The classification and designation of “types” of peoples by scientists and philosophers lent credence to this view. Promoters and commentators associated negative characterizations of the Chinese with Afong Moy: a woman, an “oriental,” and a performer on the stage.

Through her presentations the contrasts and vast differences between the East and the West became obvious and the result often gave rise to an arrogant response from the public. Thus her position was less a bridge to an alien and ancient culture as it was a foil for the new one. Her bound feet and clothing and the customs of her Chinese womanhood called forth contrary definitions of American womanhood. Her religious beliefs, often characterized as heathen, gave rise to responses from moral reformers and other Christians. Her explanation of the Chinese emperor’s absolute power and governance compelled a contrast with American republicanism and its emphasis on virtue, self-government, education, and self-control. A presentation of China’s ancient ways reinforced the notion of America’s progress.

So little is said, written, or spoken of Afong Moy’s life in America that one of the principal ways to reach into her narrative is through sensory expression. Her gestures, movements, posture, and even tears convey the sentiments that lie beneath the few words she spoke. The observations of onlookers provided telling descriptions of Afong Moy’s fleeting moments of emotion as she irritably responded to proselytizing, unwelcome contact, and unbinding of her feet. These expressive moments allow us to read her character and at times her alienation.

Afong Moy’s disparity lay not just in her “Chineseness” but equally in her womanhood. In the 1830s, only a small handful of male Chinese lived in America, but likely she was the only woman. Her gender placed her in a unique position. As an unmarried woman without family, she was dependent on her managers for her livelihood. With bound feet, she was restricted in locomotion. Her position, first as a merchant’s billboard and then as a spectacle, compromised and limited her place as a woman living in American society.

Who was the audience for Afong Moy’s messages generated from the stage and presented in the athenaeums, theaters, museums, and lecture halls across America? Of the thousands who saw her, we know the names and particular experiences of only 11 audience members who recorded commentaries in their diaries, poems, letters, or scrapbooks. Most were of the middle or upper middle classes, and only one might be considered elite.

Though certain places of public entertainment were considered suspect, unruly, and indecent in the 1830s, select locations had attained a slightly different cast. Americans had an increasing desire for edification; museums, athenaeums, and salons provided those opportunities to learn about a wider world. They also were places to be seen engaging in that activity. In the first, and much of the second, phase of her staging, Afong Moy’s events took place in these more respectable sites, where many people had begun to gather.

The Carnes merchants and Captain Obear, Afong Moy’s minders, took advantage of this burgeoning desire for public education. In 1834 they cleverly intertwined their sales campaign with the public exhibition of Chinese “curiosities,” which would include Afong Moy, in a salon near New York’s City Hall. In December 1834 they published a two-page catalog of their exhibition with images of the “Chinese Lady” featured on both sides. On one side they listed historic Chinese objects such as 600-year-old mirrors, a 1366 iron cup, a 1486 Chinese bell, and five Chinese musical instruments. On the other side they recounted information on Afong Moy, whom visitors would find “surrounded by various articles of Chinese manufacture, worthy the attention of the curious.” This was the first, albeit the smallest, published American catalog presenting Chinese objects to the public.

In America, Moy’s whole known life was one of performance. We have no other way to evaluate her meaning to others but through her life on the stage.

In 1838, China trader Nathan Dunn would publish Ten Thousand Chinese Things to accompany the opening of his Chinese Museum in Philadelphia, and in 1845 John R. Peters printed a descriptive catalog for his Boston Chinese Museum. The merchant entrepreneurs, the Carneses and Obear, were in the forefront, the first to capture the public’s curiosity and desire for knowledge about China. In their catalog, they conflated the historic Chinese objects with contemporary ones available for purchase and heightened the appeal by including exotic, “oriental” images of Afong Moy. Their small publication promoted sales while promising to inform the public about China. The golden chain of global commerce bound the historicity of “oriental” China to the Chinese lady and the goods she promoted.

In America, Afong Moy’s whole known life was one of performance. We have no other way to evaluate her meaning to others but through her life on the stage. Her presentations were as much the concoction of her managers’ presumptions about China as they were her own infusions of Chineseness. Visitors assumed that the objects, clothing, and images affiliated with Afong Moy had historical validity.

Yet as Edward Said remarked, Orientalism “is a system of representations framed by a whole set of forces that brought the Orient into Western learning, Western consciousness.” The diffuseness of what Orientalism means can therefore be widely interpreted and applied by Western influencers. Afong Moy serves as a bridge, a foil, and then equally as a window, to America’s cultural perception of China. She must therefore be evaluated in light of what her American managers permitted her to convey and what objects and images she had available as conveyances.

Despite these hindrances and possible misrepresentations, Afong Moy’s presence on the stage provided the most powerful portrayal of China that America had yet experienced. Josephine Lee rightly determined that “The ‘liveness’ or ‘presence’ of theatre suggests an immediate, visceral response to the physicality of race; the embodiedness of theater is experienced or felt, as well as seen and heard. The theater does not let us forget that questions of racial difference concern our most basic gut reactions, experiences, and sensations.” Afong Moy experienced the white audience’s gaze, but she, in turn, gazed back. 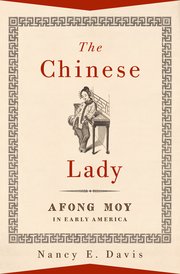 Nancy E. Davis is curator emeritus of Home and Community Life at the National Museum of American History, Smithsonian Institution. She has worked as a public historian in local, state, and national museums for more than forty years. Her research in museums and as a lecturer has frequently addressed aspects of Asian influence on American culture.

People Who Look Like the Paintings They're Looking At: A Photo Project

How Cooking Helped Me Find Joy After Coming Out 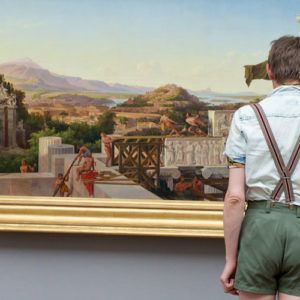 People Who Look Like the Paintings They're Looking At: A Photo Project

Since 2015, Austrian artist Stefan Draschan has been visiting museums in Europe to photograph moments of surprising correspondence...
© LitHub
Back to top
Loading Comments...