At a Crossroads, She Sought Another Writer's Counsel

On April 15, 1862, Emily Dickinson did not set out to write the most important letter in American literary history. But many scholars believe that’s exactly what she did.

In Amherst, Massachusetts—with schooling behind her and seclusion setting in—Dickinson was at a crossroads. Already she had been seriously writing poems. She had taken to assembling small booklets of her verse: writing 20 or so poems onto folded stationery, stacking each folded sheet one on top of the other, and then stitching up the sides. “Fascicles,” an editor later called them.

With over 400 poems written, some of them shared with friends and family, and a few published anonymously in newspapers, 31-year-old Dickinson wondered if she were ready to go public—or at least ready to reach out to a stranger who might know how to direct her.

A recent article in the Atlantic Monthly had caught her eye. “Letter to a Young Contributor” by essayist Thomas Wentworth Higginson offered advice to would-be writers who sought publication. Higginson’s suggestions ran the gamut from the practical (use good pens, black ink, and white paper) to the profound (“There may be years of crowded passion in a word, and half a life in a sentence.”). Although she rarely corresponded with someone she did not know, something in Dickinson moved her to respond.

Weeks before, Amherst had suffered a terrible blow. Frazar Stearns, the beloved son of the Amherst College president, had been killed in battle. Dickinson watched her brother keening with grief. He keeps saying, “’Frazer [sic] is killed’ – ‘Frazer is killed,’ just as Father told it – to Him. Two or three words of lead – that dropped so deep, they keep weighing.” One of Frazar’s college classmates built a coffin out of discarded wood from the battlefield and rowed six miles down the Neuse River to Union gunboats offshore. He stayed with Frazar’s body until it reached Amherst, where William Augustus Stearns could not bear to view his 21-year-old son’s body.

Emily Dickinson didn’t ask if her verse was “publishable” or “good.” She knew all along, didn’t she?

The Union victory in New Bern, North Carolina in March 1862 had been a decisive one for the Amherst Boys, a regiment led by former chemistry professor William Clark. After troops that day captured a Confederate cannon, Brigadier General Ambrose Burnside directed it to be sent to Amherst to acknowledge the sacrifice of Stearns and others. Later the college held a ceremony dedicating the cannon, and the poet’s father offered remarks. In his address, Edward Dickinson noted that all lives are touched by the sweep of history. In this precipitous moment, he said, individuals are tied to the events surrounding them by “sacred associations.”

The next day, spring was stirring. In his daily weather journal, Amherst College professor Ebenezer Snell recorded that ground frost had finally thawed. Cirrus clouds scoured the sky, and—in the vernal pools around the village—trees frogs were beginning their seasonal chorus. Never had Emily felt more ready to share her work with the world. Perhaps her father’s words about “sacred associations” propelled her. Maybe she realized that readers she had counted on—her cousins, sister-in-law, and friends—were busy with their own lives and not as available to her as they once were. Mounting war deaths and her always-intense awareness that life could change in an instant galvanized her. Patriotism might have played a role too. “This American literature of ours will be just as classic a thing, if we do our part,” Higginson had written in the Atlantic, “If, therefore, duty and opportunity call, count it a privilege to obtain your share.”

Dickinson sifted through her poems, and selected four: “We Play at Paste,” “I’ll tell you how the Sun rose,” “The nearest Dream recedes – unrealized,” and “Safe in their Alabaster Chambers.” She took out another sheet of paper and wrote.

Are you too deeply occupied to say if my Verse is alive?

The Mind is so near itself – it cannot see, distinctly – and I have none to ask –

Should you think it breathed – and had you the leisure to tell me, I should feel quick gratitude –

I enclose my name – asking you, if you please – Sir – to tell me what is true?

When Thomas Wentworth Higginson collected his mail from the Worcester, Massachusetts post office, he pulled out a letter with a curious scrawl. The letter bore no signature, but inside was a smaller envelope, and written on the card was Dickinson’s name. He read the poems, and wrote back immediately. It would be another eight years until Thomas Wentworth Higginson and Emily Dickinson met face-to-face, but the relationship begun with that portentous letter would change their lives.

Higginson learned quickly it was best not to offer Dickinson advice. She knew her mind better than anyone. But what he could not offer in critique, he offered in constancy, friendship, and an enduring interest in the wild terrain of her mind. When she died in 1886, he traveled to Amherst to read an Emily Brontë poem at her funeral. Later, after Dickinson’s sister found sheet upon sheet of poems tucked into a dresser drawer, she contacted him. Higginson and co-editor Mabel Loomis Todd went to work, and in 1890, Emily Dickinson’s Poems launched into the world.

For the rest of his life, Higginson continued to think about that first letter with its eruptive first line, trail of dashes, halting syntax, and envelope-in-an-envelope. But it may have been that word “alive” in the first sentence that never let him go.

When fate threw the two New Englanders together on April 15, 1862, Emily Dickinson didn’t ask if her verse was “publishable” or “good.” She knew all along, didn’t she? She understood poetry had to transport, had to be visceral, and had to find its way into our bodies. On that soft spring day, Emily Dickinson took the most unprecedented step of her life. Her letter to Thomas Wentworth Higginson altered the course of American literature, and taught us that great poems must breathe. To hit the mark she wanted, Dickinson knew poetry had to be consciousness itself, and alive with possibility. 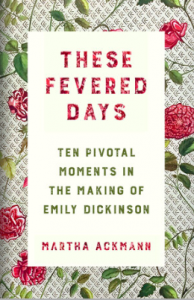 These Fevered Days by Martha Ackmann is available via W.W. Norton.

Martha Ackmann, author of These Fevered Days, Curveball, and The Mercury 13, writes about women who have changed America. The recipient of a Guggenheim fellowship, Ackmann taught a popular seminar on Dickinson at Mount Holyoke College and lives in western Massachusetts.

On the Many Mysteries of the
European Eel

The Best New Books to Read This Summer 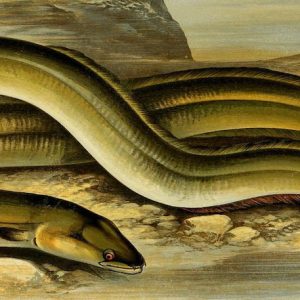 On the Many Mysteries of the
European Eel

This is how the birth of the eel comes about: it takes place in a region of the northwest Atlantic Ocean called the Sargasso...
© LitHub
Back to top
Loading Comments...