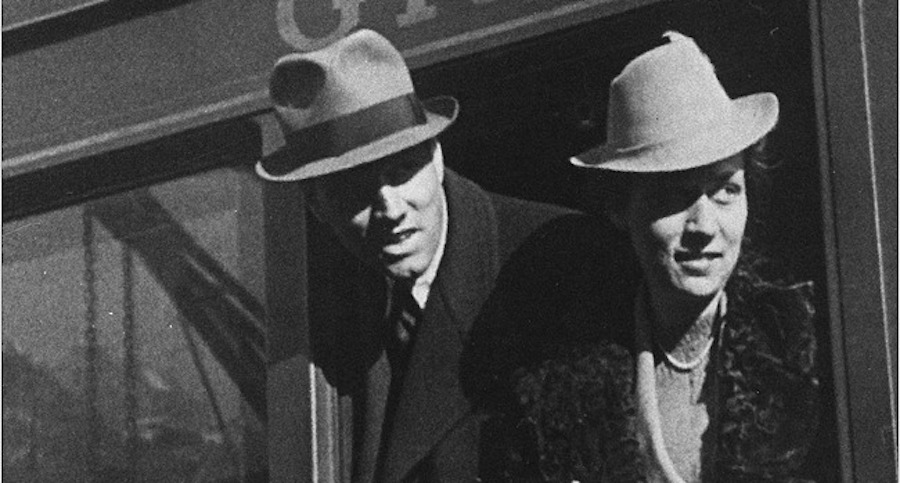 Freya and Helmuth von Moltke: Love in a Time of War

Sometimes I think about the fate of our long written conversations, and whether you and our sons will find them worth reading after ten, twenty, or more years. They originated in a situation that most likely has rarely been captured in writing, because normally the contact winds up being ruptured or monitored.

When this time is over, when true peace has been restored, what will people say about these kinds of reflections? Will they be understood? Will it be believed that these were extreme situations that made people hysterical, will people be able to grasp the notion that a human being, this curious animal, can grow accustomed even to being executed?

Helmuth James von Moltke wrote these words on January 2nd, 1945, three weeks before his execution for high treason by the Nazis. The “long written conversations” in this volume to which he refers had taken place over the course of the preceding three months in the form of near daily letters between himself and his wife, Freya, smuggled in and out of a Nazi prison at great risk by the prison chaplain.

Thinking back over the exchange in the face of death and with war still raging about him in Berlin, Helmuth nevertheless manages to imagine a better future: a future for his wife and sons, a future after National Socialism, a future without war. To the degree that such a future is our present, the questions that Helmuth poses are for us to answer.

These letters allow us to take part in the written conversations of Helmuth and Freya, suspended, as it were, between their married life prior to Helmuth’s arrest and the certainty of his approaching trial and possible death, between hope and occasional despair, between love, faith, and cool rationality. Few accounts can match the immediacy of daily letters such as these and their power to capture how people think, feel, and act in the face of a murderous regime, how we as “curious animals” react, behave, and preserve our humanity in the face of the extreme terror that humans, too, are capable of.

When the Nazis seized power in Germany on January 30th, 1933, Helmuth and Freya were two young, newly married law students pursuing their studies in Berlin. Opposed to Adolf Hitler from the very start, the couple became actively involved in the resistance against the regime in 1940, when they jointly agreed to assume the risks and began to engage in conspiratorial activity, gathering like-minded friends and collaborators in a group that would become known as the Kreisau Circle.

One of the most important resistance groups against the Nazi regime, the Kreisau Circle devised detailed political and economic plans for a democratic and European Germany after Hitler. Conscripted to work as a lawyer for the German Wehrmacht by day, Helmuth used his evenings, business trips abroad, and many a lunch hour conducting what he called “our internal war” against the dictatorship.

The letters that the couple exchanged during Helmuth’s incarceration at Tegel prison span approximately four months, leading up to the day of his execution on January 23rd, 1945. Freya was at this point a 33-year-old mother of two small sons living on the family’s estate in the province of Silesia, some 250 miles from Berlin. Helmuth, aged 37, had been arrested unexpectedly by the Gestapo in January 1944 for having warned a colleague that the secret police had infiltrated meetings involving persons critical of the regime, including his colleague, who was tried and executed.

But Helmuth avoided trial and instead was interned in a prison on the grounds of the Ravensbrück concentration camp, north of Berlin. During the months in which he was held here, Freya was able to see him several times near the prison under Gestapo supervision. The letters that the couple exchanged during those months were routinely censored by the Gestapo, and Freya and Helmuth consequently had to be careful in what they said and wrote to each other.

At this point, Helmuth’s imprisonment, though it was trying and a cause for the couple’s constant concern, was likely going to be temporary since the Gestapo had not discovered his clandestine work in the Kreisau Circle. The relative stability of his situation changed drastically after the failed attempt on Hitler’s life by Claus Schenk Graf von Stauffenberg on July 20th, 1944, which led the Nazis to redouble their terror and eradicate all pockets of resistance.

In Ian Kershaw’s words, the failed coup served as a “sharp accelerator,” strengthening rather than undermining the regime’s resolve. Many of Helmuth’s coconspirators—chief among them Peter Graf Yorck von Wartenburg, Helmuth’s closest friend and ally in the group—had joined Stauffenberg’s bomb plot following Helmuth’s arrest and were now rounded up and executed. Helmuth, meanwhile, was moved from Ravensbrück to Berlin, to await trial in Tegel prison.

Freya von Moltke did not want these emotional letters in the public domain during her lifetime, but agreed to publication following her death.

Freya’s letter of September 29th marks the couple’s first contact in the wake of Helmuth’s transfer after the attempt on Hitler’s life; it also represents their first uncensored communication since her husband’s arrest. Thus begin the “long written conversations,” which are now held at the German Literature Archive in Marbach. The fact that Freya and Helmuth were able to engage in this conversation at all is in itself something of a miracle. By all rights, they should not have been able to write to each other during the year of his incarceration—save for a few authorized, censored letters in Ravensbrück and then in Tegel prison.

After the July assassination attempt, Helmuth was interrogated and placed under rigorous supervision, with contact between the couple strictly policed. By a stroke of incredible good fortune, Harald Poelchau was the prison chaplain at Tegel. Poelchau was a close friend of the Moltkes, a member of the Kreisau Circle who had also participated in the plenary meeting in Kreisau in the spring of 1942 but remained undetected. Thanks to Poelchau, they suddenly found themselves in a position to carry on this clandestine correspondence, in which they were able to talk freely, allowing us now to walk beside them through the remaining days of their life together.

Poelchau smuggled every one of the more than 150 letters in and out past the guards on daily visits to Helmuth in prison, returning all correspondence to Freya after it had been read. She, in turn, hid the letters from the Gestapo in the beehives in Kreisau and safeguarded this treasure for the remainder of her life. Freya did not want these emotional letters in the public domain during her lifetime, but agreed to publication following her death in Norwich, Vermont, on January 1st, 2010. They appeared in German in 2011 to great acclaim.

Two weeks after his transfer to Tegel, Helmuth was indicted, charged with treason, defeatism, and the attempt to overthrow the regime. This development led the couple to expect the trial, verdict, and near certain execution within a matter of days, as the Gestapo typically sent prisoners to their execution on the day of the verdict. On Freya and Helmuth’s wedding anniversary, October 18th, however, they learned that the trial would not start before November at the earliest, and the tone of the correspondence shifts, as both once more begin to hope, to “turn toward . . . having a life together once again,” and focus on honing Helmuth’s defense.

November arrived with still no trial but permission for Freya to visit Helmuth in prison twice. There were to be five meetings in all during these months, always under supervision and generally obtained on Freya’s pretense of having urgent questions to discuss regarding the management of the estate. The emotional intensity of the first November meeting subsequently plunged Helmuth into a severe depression that he had to surmount alone in his cell, albeit in conversation with Poelchau and, through the letters, with Freya.

The next meeting in late November marked a high point of these four months as the couple were able to celebrate Communion together, with their friend Poelchau officiating in the office of the prison director. The year drew to a close on a quieter, more hopeful note—even as the two never for a moment forgot that Helmuth’s death could come very suddenly. As Helmuth writes at the end of December: “For me, a strange year is coming to an end. I actually spent it among people who were being prepared for a violent death . . .”On January 1st, 1945, the trial date was finally set, putting the inevitable in motion. The couple saw each other once again before the proceedings on January 9th and 10th, and then one last time when Helmuth’s execution was delayed after the verdict.

Each of these letters is a farewell letter written in light of the constant threat of Helmuth’s imminent execution, and each letter testifies anew to Helmuth and Freya’s clear-eyed assessment of their situation. With every letter, they prepare themselves and each other for his execution and for her life without him. With extraordinary constancy, love, and faith they sustain each other through the correspondence while reminding each other over and over again of the inescapable conclusion toward which the passing days and weeks are heading.

During that time, however, both on occasion also lose the remarkable inner peace that otherwise buoys them, and about this, too, each reports openly to the other. Helmuth’s letter of November 14th, 1944, and Freya’s of January 13th, 1945, provide especially vivid glimpses of the respective depths of their despair, from which they gradually emerge over the course of subsequent letters and with the help and reassurance of each other. And so this correspondence is also infused with the power of hope. As the trial is postponed several times, Helmuth plots different lines of defense in his cell. Freya undertakes various attempts to secure support from outside, stave off the execution, and obtain a pardon from high-ranking Nazi officials.

Just as Freya reports about her efforts on his behalf, which take her on far-flung errands through war-torn Berlin (and occasionally back to Kreisau to look after their young sons and the estate), Helmuth keeps his wife abreast of his thoughts and dreams, his moods, and the details of prison life. Separated by the prison walls the couple draws intensely close during these months—“closer to you than ever,” as Freya writes a few days before Christmas. 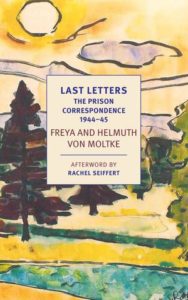 On the Reclamation of Australian Aboriginal and Native American Identity

'Tohunga,' a Poem by Tayi Tibble 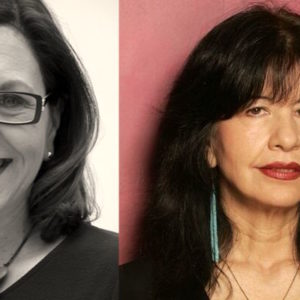 On the Reclamation of Australian Aboriginal and Native American Identity

For September’s theme, Reading Women are discussing books by Indigenous women from around the world. Today, Kendra and Jaclyn...
© LitHub
Back to top
Loading Comments...