The Landlord’s Game: Eula Biss on the Anticapitalist Origins of Monopoly

Learn About Economic Justice... and Have Fun While Doing It?

I’ve been playing Monopoly with J every evening for a week and I haven’t won a single game. J plays with abandon, buys indiscriminately, and wins repeatedly. Tonight he’s thrown a suspicious number of doubles, so I accuse him of cheating. He’s not cheating, he explains to me happily, he’s just a lucky person.

The Landlord’s Game, the game that became Monopoly, was designed in the early 1900s to expose the problems with an economic system in which property owners “win” by impoverishing renters. The game was informed by the theories of Henry George, who proposed that profits made from a natural resource, like land or coal or oil, should be distributed equally among everyone. He believed that everyone was entitled to profit from their labor, but that profits made from the ownership of property should be heavily taxed.

The woman who invented the Landlord’s Game, Elizabeth Magie, was an advocate of that tax. As an unmarried woman with her own home, rare at the time, she struggled to support herself on the $10 per week she earned as a stenographer. Rather than marry out of economic necessity, she advertised herself for sale to the highest bidder as a “young woman American slave.” This made national news and caused a small scandal.

She was trying to make a statement about women’s economic dependence, Magie told reporters, and she meant only that she would sell her labor in marriage. “Of course, I am a white slave,” she said, “but I am not on the block physically.” Her metaphor was appreciated by Upton Sinclair, who sent money. Others were offended—not because a considerable number of people who had been enslaved were still alive and could testify that slavery was not like marriage, but because she was suggesting that marriage, like slavery, was an economic institution.

In Magie’s original version of the Landlord’s Game, players earned money by completing a circuit around the board and passing the square labeled “Labor upon Mother Earth Produces Wages,” which is now simply “Go.” Magie patented her game twice, but this didn’t prevent a man, Charles Darrow, from packaging the game under the name Monopoly and making himself a millionaire. Parker Brothers bought Magie’s patent with a one-time payment of $500, but they paid Darrow royalties for the rest of his life.

Elizabeth Magie hoped that children who played her game would grow up understanding the injustice of our economic system.

Darrow took the game Magie designed, but she drew most of its distinctive features, including the continuous loop of play, from Zohn Ahl, a game played by the Kiowa people of Oklahoma. “It is bitterly ironic,” writes Philip Winkelman, “that this gift of the Kiowa to America and to the world should result in the daily reenactment of the reduction of opponents to abject poverty through the parceling up and exclusive ownership of land.”

No fair, J complains when I ask him for change. I owe him $450 for landing on Pennsylvania Avenue with two houses and I’ve given him a $500 bill. As the winning player, he is now in the habit of objecting to any transaction that involves handing money to anyone else. “Let me tell you there are no fairer‐minded beings in the world than our own little American children,” Magie wrote optimistically.

She hoped that children who played her game would grow up understanding the injustice of our economic system. To help illustrate this injustice, she designed two sets of rules. Following one set of rules would create an equal distribution of money among players, with no winner. Following the other rules would create an accumulation of wealth, allowing one player to win. The rules that survived, the rules we still play by, are winner take all.

Dan rings our bell just to say hello. When he comes in, I ask him about capitalism. He’s a sociologist, and the first person I’ve talked with who seems comfortable with the subject. You’ve read Marx? he checks. I read Capital in college, I tell him. And I’ve just read the first chapter of Capital in the Twenty-First Century, so I know that Piketty, like Marx, believes that capitalism, unchecked, will always produce inequality. But I still don’t understand the inner workings of contemporary capitalism, the nuts and bolts of the markets, the push and pull of bubbles and recessions. Even economists, Dan says, don’t understand that.

Three men won the Nobel Prize for economics in 2013, he tells me—two of them for theories that directly contradicted each other. They disagreed about bubbles, to begin with. Robert Shiller described the rapid rise of housing prices in 2005 as a bubble, and warned that prices would fall dramatically.

Eugene Fama didn’t think the market would produce something as silly as a bubble. Even after the housing crash, Fama denied that the housing market had been a bubble and was skeptical that bubbles existed. “I don’t even know what a bubble means,” he said. Economics isn’t good at explaining certain things, Fama acknowledged, like what causes recessions, but he still believed that the markets were “rational.”

Rational markets don’t make bubbles. And rational markets don’t need to be regulated. Shiller, who had been tracking irrational behavior in the markets, disagreed. The idea that stock prices were rational, he wrote, was “one of the most remarkable errors in the history of economic thought.”

Real economic systems don’t behave in accordance with theory. They are shaped by our politics and policies.

They were on opposing sides of a major economic argument and they both won. “The prize committee,” Binyamin Appelbaum reported, “said these findings showed that markets were moved by a mix of rational calculus and irrational behavior.” Like us. I wonder what it means, I tell Dan, that the technical terms used to describe markets are “rational” and “irrational.” It sounds like economists are debating, in sexist language, whether markets are logical men or volatile women.

Markets are mathematical models, Dan says, and economics is theory. Real economic systems don’t behave in accordance with theory. They are shaped by our politics and policies. “Markets are constructed by people,” Appelbaum argues, “for purposes chosen by people—and people can change the rules.” We don’t have to privilege accumulation over distribution. But that is the rule that governs our everyday lives—our work and our play.

J has two Pokémon cards that he was given on the first day of first grade by a boy who told him they were “starter cards.” He doesn’t know anything about Pokémon, but soon he wants more cards. At the comic book shop, we discover that a pack of these cards costs $3, which means J can buy them with the money I give him for doing chores. But what the cards cost has nothing to do with what they’re worth.

The value of any given card is determined by a group of children gathered on the asphalt of the school playground. There is, in the world beyond the playground, an established market for these cards and websites that chart their rising and falling prices like stocks. But these kids don’t really know about that yet. They’re still inventing their own values.

On the asphalt, some cards are coveted because they’re shiny, others because nobody has them yet, and others because they’re powerful. How powerful a card might be is divined from the numbers printed on the card, which are manipulated with flawed first‐grade math that leads to debate over the exact quantity of power in play.

There’s debate, too, about what constitutes a good trade. After J trades away his most powerful card for a less powerful card, I hear the babysitter asking him if he was a smart negotiator. She suggests that he might want to try to get more for a card like that next time. Then he comes home with the entire collection of another boy, two years younger, who has traded it all to him for one card.

A game can be played with these cards, supposedly, but none of the kids understand the rules. Their end is accumulation—collecting cards for a game they don’t know how to play. 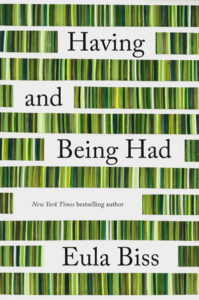 Excerpted from Having and Being Had. Used with the permission of the publisher, Riverhead. Copyright © 2020 by Eula Biss.

Eula Biss is the author of four books, including The New York Times bestseller On Immunity: An Inoculation, which was named one of the 10 Best Books of 2014 by The New York Times Book Review, and Notes from No Man’s Land: American Essays, which won the National Book Critics Circle Award for criticism. Her work has appeared in Harper’s, The New York Times, The Believer, and elsewhere, and has been supported by an NEA Literature Fellowship, a Howard Foundation Fellowship, and a Guggenheim Fellowship. 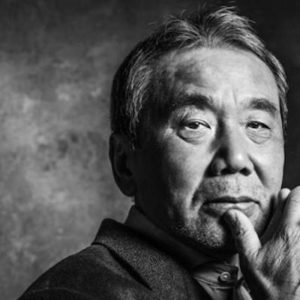