Laura Barnett on Seeing Another Country Through Fiction

It began with Gerald Durrell, a trip to Greece, and a slaughtered lamb.

We did. We ate crumbling spanakopita from the bakery on the harbour; walked the long, dusty path to the beach; and spent hours absorbed in our favorite shared activity: reading. She’d suggested I bring along Durrell’s My Family and Other Animals, and I, an animal-obsessed child, was entranced: there was Greece, the country I was visiting, coming alive on the page, in all its bohemian glamour and faunal chaos.

Inspired by Durrell’s menagerie—as I recall, Achilles, his strawberry-eating tortoise, made a particular impression—I befriended the lamb I found tethered to a tree outside an islander’s home. I gave this lamb a name (sadly, that has been lost to the mists of time); I fed it carrots. Its owner, a grinning, toothless old woman in a loose black dress, would come out to join us, offering encouragement in her incomprehensible language. The lamb liked me—I could tell. I saw myself, like the young Durrell, as a fledgling naturalist, able to communicate wordlessly with animals; my future career as a veterinarian seemed assured.

And then, one day (Good Friday—those familiar with Greek island culture may anticipate what’s coming), I tripped happily along to feed my friend the lamb, and found its stripped carcass hanging from the tree. The old woman, still grinning, came out to offer me some soup—a special Easter delicacy, my mum and I gathered—in which the lamb’s eyeballs were floating like peeled lychees. I screamed. I ran. I became a vegetarian, and would remain one for the next ten years (I was, like so many, eventually undone by the irresistible scent of a barbequing hamburger).

Disturbing as this incident was, I remember it chiefly, now, for setting a precedent that continued through my childhood, and into my adult life: my fascination with what I might usefully call “literary tourism”—with seeking out, whenever I travel, fiction set in the place I am visiting.

I don’t mean travel guides, or travel writing—illuminating and useful as these can be—but novels: fictional renderings that offer us another person’s perspective on a place, even as we are, through travel, forming that perspective for ourselves. It’s not armchair travel, either—that wonderful experience of visiting places, real or imagined, in books, without leaving the comfort of our living-room—but real-time travel, accompanied by a remarkable literary companion whose knowledge of the places we are passing through is far superior to our own.

For though I never quite got over the shock of being confronted with that dead lamb (even now, 26 years later, I still picture its naked, dripping body, and shudder), I continued to love Durrell. His Corfu trilogy accompanied me through the annual Greek holidays my mum and I took over the next few years, and I have never lost that early desire to see the place I was visiting reflected, in new and unexpected ways, on the page.

Living in Rome for a year while studying Italian and Spanish at university, I devoured the Italian-set novels of Henry James and E.M. Forster. I read Hemingway in Spain; Hans Fallada in Berlin. On my honeymoon, which my husband and I spent driving from Cape Cod to Maine, I took a selection of my favorite New England novelists: John Irving; Richard Russo; Elizabeth Strout.

For a recent trip to the American Booksellers’ Association Winter Institute in Denver, Colorado, I packed several books by the late Colorado-based author, Kent Haruf. Preparing for my first visit to Australia to attend the Perth Writers’ Festival last February, I sought out Cloudstreet by Tim Winton—that irrepressible, sprawling novel tracing the intertwined fates of two working-class West Australian families.

I am far from alone in this, of course. Many fellow authors, readers and friends have admitted that they are also keen literary tourists. My mum (from whom I have acquired so many of my reading habits) is one, too, though a recent cruise from England to Holland, Iceland and the Faroe islands proved a challenge. Asking our excellent local bookseller, Jonathan, to recommend a contemporary Icelandic novel to take with her, he said, “How do you feel about murder?”

Her answer? “Not so great.” Scandi-noir, wonderful as it is, might not, after all, be quite what you feel like taking on holiday: that romantic evening in Reykjavik could acquire quite a different atmosphere when your mind is filled with dark-skied menace, and you’re half-expecting a crazed murderer to jump out from the next corner.

That leads me to what is both the main pleasure and pitfall of literary tourism: that the version of a place depicted in a novel will undoubtedly not entirely fit the view from your car window or hotel room. That, of course, is exactly why I, and many like me, choose to enhance our understanding of that place through fiction.

A novel allows us to see the world through another’s eyes; sometimes, that vision will be disturbing, and it is certainly unlikely to fit the smooth, sanitized version presented by a travel company or guidebook, or even the benign clichés we may be carrying in our own mind. It’s like TripAdvisor, without any of the weird obsessives who’ve taken 20 photographs of the hotel toilet.

That’s not to say that the literary tourist won’t encounter his or her fair share of the weird and wonderful. Before my first trip to Cuba, my stepsister lent me her copy of Pedro Juan Gutierrez’s The Dirty Havana Trilogy, which opens, as some readers may be aware, with a frank and graphic depiction of some rather sweaty and acrobatic sex. I wasn’t naïve enough to take this as indicative of the sexual customs of all Cubans, but the novel certainly opened my eyes to a certain febrile atmosphere, a certain sensual languor, of which I would probably otherwise not have been aware.

There are times, of course, when a fictional depiction of a place can be plain misleading: watch too many episodes of The Wire, and you’d be forgiven for being far too terrified ever to set foot in Baltimore, though Anne Tyler’s novels—of which I am a dedicated fan—offer a palate-cleansing corrective to that bleak vision of what I now know to be, in the main, rather a charming city.

And a series of contemporary Italian novels I read as part of my degree, by a group of young authors known, since the mid-90s, as the “giovani cannibali” (“young cannibals”), blew apart all the romantic images of Italy I’d formed under the tutelage of Forster and James. These novels, informed by consumerism, pulp fiction and splattercore films, take a cartoonish, hyperreal view of Italian life that would forever alter my assumptions about what was going on inside those elegant, shuttered palazzi. One chapter ended with a man murdering his wife, decapitating her, and filling her hollowed-out skull with the contents of a bottle of premium-brand shampoo. Now that’s something you don’t get in A Room With a View.

There is a distinction to be drawn between seeking out novels written by outsiders (usually English-speaking), and those penned by natives. I will admit that I am, like many Anglophones, mainly drawn to the former, and don’t read as much literature in translation as I ought, and would like, to. There is something particularly appealing, when traveling, about reading an outsider’s perspective—the writer and his or her protagonist stands, in that case, in our own shoes, as a tourist or traveler.

But it is only in the authentic literature of that place and language that we can really gain a sense of what it means to live there—so it’s encouraging, here in the UK, to see so many new English translations of key non-English language fiction being published. We English-speaking literary tourists will have a far wider selection, in future, of books to stow in our suitcases.

Then, however, there is the danger of disappointment—of realizing that the version of a place we have so treasured through the work of a particular novelist is not necessarily one held dear by that city or country’s residents. I was shocked to discover, on meeting my husband’s family in Maryland for the first time, that none of them had ever read any Anne Tyler, despite living just ten miles away from Baltimore (I have corrected this omission by foisting a different Tyler novel on them each time we visit).

And when I mentioned my love for Kent Haruf to people I met in Denver (not the publishers and booksellers, I should add, but the shop assistants and baristas I got talking to), I was as likely to receive a blank stare, and the question, “Who?,” as I was to see a nod of happy recognition. How, I wanted to shout at them, can you live here, in Colorado, and not be familiar with the writing of Haruf, in which your cities, your mountains, your flatlands, are so eloquently, so precisely and poignantly, described?

But I didn’t shout, of course—and not only because I am British, and politeness is imprinted on my DNA. I didn’t because that is my version of the state, my exercise in literary tourism: for those who actually live in Denver, there are as many versions of the place as there are snowdrifts on the Rockies.

I came across something recently that strikes me as a useful analogy for all this. Here in my home city, the Museum of London has designed an app that enables users to map historic photographs over their cameraphone’s view of the same street or landmark, creating a slippage between the present and the past. Literary tourism works in much the same way. Through fiction, we map another perspective on a place over the one we are forming, in real time, through our own eyes; and we are offered the unique opportunity to observe, as we travel, how much is the same, and how much is thrillingly, intriguingly different.

The Versions of Us is published by Houghton Mifflin Harcourt.

Laura Barnett is an author and journalist. The Versions of Us, her first novel, is being translated into 23 languages, and will be out May 3rd in the US, from Houghton Mifflin Harcourt. 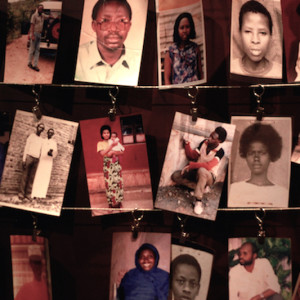 If you have seen a machete, you know that the blade is gently curved, a curvature which splits open green coconuts as easily...
© LitHub
Back to top