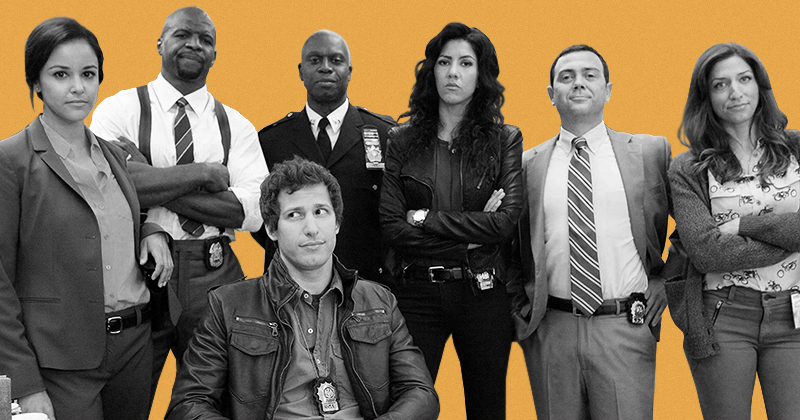 The Inherent Anxiety of the “Good Cop” Show

Brooklyn Nine-Nine is Beloved, but Its Premise Raises a Big Question

Within the first minute of Brooklyn Nine-Nine’s fifth season finale, the show’s protagonist Detective Jake Peralta asks his colleagues to threaten a private citizen. It’s his wedding day, and his bride-to-be’s suddenly stained veil needs to be dry-cleaned ASAP. When Jake entreats Detective Rosa Diaz and Sergeant Terry Jeffords to use force to get it cleaned, Jeffords insists, “We’re not going to abuse our power.” “Of course not!” Jake pointedly exclaims “We’re good cops!” (Emphasis his.)

This episode, indicative of Brooklyn Nine-Nine’s series-long anxiety and ambivalence over being a cop show, could have been its last: The show was canceled by FOX in mid-May but picked up for a sixth season by NBC just over a day later, in part due to an outpouring of support on social media that included pleas from high-profile fans like Guillermo Del Toro and Lin-Manuel Miranda. Facebook posts, tweets, and essays lauded everything from the show’s stars, to its representation of gay and bisexual characters, to the way it thoughtfully triangulated its appeal, slowly paring away the initially disturbing aspects of the show in response to viewer feedback—notably, Detective Charles Boyle’s early, creepy obsession with Diaz.

I’ve liked Brooklyn Nine-Nine since it premiered, and I’m glad I’ll be able to watch more of it. Andre Braugher’s deadpan comedic timing as Captain Holt is fantastic, Stephanie Beatriz is hilarious as the tough, too-intense Diaz, and I’m even a fan of Andy Samberg’s goofy mugging. The show has assembled an excellent, likable ensemble. But the brief window in which the public thought it had been canceled raised questions about the show’s legacy, and whether there were elements worth scrutinizing. While many fans bemoaned the loss of the show (and its cast, one of the most diverse on network television), others took issue with its positive depiction of police. The latter cohort raised a question worth asking: Is now really the time to be telling a story about “good cops”?

The persistence of cop shows is itself unsurprising. Crime is a common storytelling device for a reason: Each incident presents a new problem for characters to solve, and, in many cases, for viewers and readers to do so along with them. Also, many Americans still love cops; NCIS remains a ratings juggernaut, and NBC will renew Law & Order: SVU until Mariska Hargitay has to solve the heat death of the universe. But elsewhere, police procedurals have been in decline: the

CSI franchise has concluded, every other Law & Order spinoff is long gone, and Dick Wolf’s follow-up franchise of procedural shows set in Chicago has consciously expanded beyond law enforcement. “Is now really the time to be telling a story about ‘good cops’?”

Broadly speaking, detective stories have adapted along with the times; locked-room mysteries giving way to the existential squishiness of noir, the “grittiness” of urban cop dramas, and the pop psychology of serial killer narratives. But Brooklyn Nine-Nine is not just the rare police comedy—Barney Miller, its spiritual ancestor as a funny cop show, aired back in the mid-1970s. More than any cop show that preceded it,

Brooklyn Nine-Nine debuted in a world gripped by growing awareness of mass incarceration and police brutality.

Brooklyn Nine-Nine premiered in 2013, one year before Darren Wilson killed Michael Brown, an incident that ignited the Black Lives Matter movement and exploded the rising public profile of American police violence (particularly among well-off white communities that had been unaffected by it). Five years later, large swaths of the American public, particularly young people, are, correctly skeptical of or hostile to law enforcement agencies, from the cruel, inhumane ICE to the unchecked, opaque NSA to an FBI that jails people for being “black identity extremists” while largely ignoring a growing white nationalist movement.

Grappling with the rotten core of American policing might be too much to ask of a sitcom, but Brooklyn Nine-Nine has invited these conversations, repeatedly prodding at the open wound at the center of its premise. In one episode, Sergeant Jeffords is racially profiled by another detective and loses his chance at a possible promotion after filing a complaint—but he goes right back to being the good-natured sergeant in the next episode. (Holt claims the cop will be less likely to profile in the future, but even

When Holt, who became a captain relatively late in his career because of his consistent marginalization as a gay, black cop, describes himself as a “good soldier,” it feels inspiring in some ways to watch him claim value for himself that other have not. But there’s also an element of tragedy to Holt’s determination; he has devoted his life to an institution that, as Jeffords finds out, is willing to betray him in an instant.

One of the running plots of Brooklyn Nine-Nine’s fifth season follows Holt’s candidacy for New York’s police commissioner job. His main opponent Olivia Crawford, played by Allison Tolman, withdraws her candidacy so that the two can avoid splitting the vote against John Kelly, the white man up for the job. Kelly, a fictional specter of the white male establishment, evokes David Caruso’s

NYPD Blue character of the same name—and thereby the history of American cop shows. But in 2018, this name also calls to mind former NYPD commissioner and noted racist Ray Kelly, and White House Chief of Staff John Kelly, a man who recently justified separating children from their families at the border by saying they’d be sent to  “foster care or whatever.”

But however self-aware Brooklyn Nine-Nine may be about the complexities of its premise, the precinct serves primarily as a venue for an otherwise very goofy, well-written workplace sitcom. (In 2015, I wrote about the show’s delightfully dumb, expertly handled physical comedy.) The relationships between the characters could map onto pretty much any office—it’s a sitcom that happens to be about cops, rather than the other way around, which makes sense when you consider that the show was created by Michael Schur and Dan Goor, two of the people behind The Office and Parks & Recreation. And like Parks & Rec, Brooklyn Nine-Nine is determinedly optimist in its storytelling; characters lose their jagged edges and together become a well-functioning machine over time until it becomes impossible to imagine a version of the show in which they don’t all actualize their wildest dreams—simply by virtue of being decent people. It’s a fantasy in more ways than one.

“Brooklyn Nine-Nine’s biggest sin is that it treats policing like a career, simply another job that puts demands on individual people, rather than an institution bigger than any of its characters.”

Brooklyn Nine-Nine wants us to imagine that everyone in the Nine-Nine is a good cop who would never abuse their police power, unless it was for a funny joke about the Backstreet Boys or to get a wedding veil cleaned. TV asks us to believe a lot of implausible things, of course, but in the case of

Brooklyn Nine-Nine the hardest pill to swallow is the idea that the NYPD as an institution could be fixed or redeemed by the good work and personal integrity of a few honest cops. No amount of good-natured hi-jinx or emotionally frank conversations can solve the investiture of the state’s monopoly on violence into an institution that rewards power-hungry assholes with minimal supervision and fewer consequences for their bad behavior. If Holt wins the race and becomes commissioner, he’ll be heading a department where police unions call defenses of the Fourth Amendment as a “disgrace,” and officers kill unarmed, disabled black men or rape teenagers in holding cells while claiming the sex was consensual.

Brooklyn Nine-Nine’s biggest sin is that it treats policing like a career, simply another job that puts demands on individual people, rather than an institution bigger than any of its characters. I love the show’s optimism, too, but I wonder what it would look like for a cop show to follow through on a commitment to interrogating the contradiction at its heart—or, better still, one that made its characters actively interested in trying to answer questions about the nature of policing outside of the bounds of very special episodes. What would it look like for the well-worn DNA of the American police procedural—and, specifically, Schur and Goor’s idealism—to be applied a show about, say, a Larry Krasner type, someone consciously trying to reform the American judicial system from the inside by dismantling it? I want to watch more 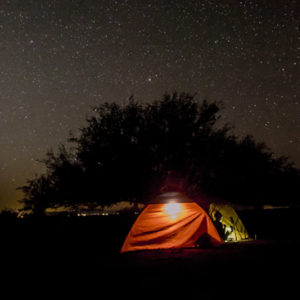 Let’s begin with the snake. It was a rattlesnake, medium-sized, a nice long rattle the color of wheat. We found it sunning...
© LitHub
Back to top