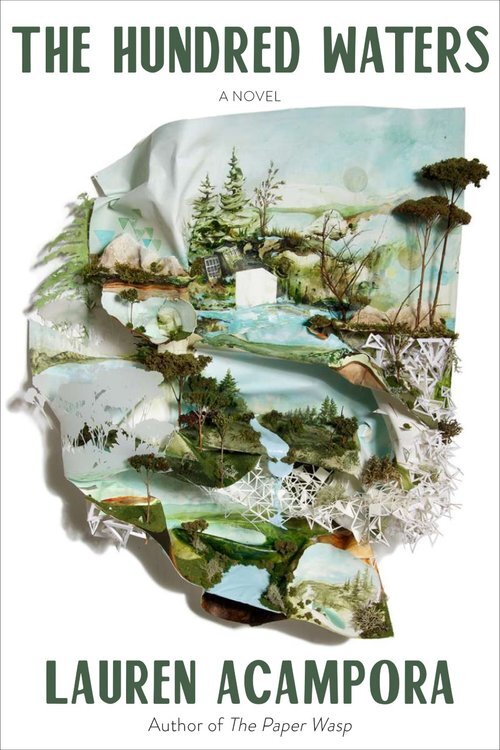 The following from Lauren Acampora's The Hundred Waters. Acampora is the author of The Wonder Garden, winner of the GLCA New Writers Award and a finalist for the New England Book Award; and The Paper Wasp, longlisted for the Center for Fiction’s First Novel Prize. She is a 2021 NYSCA/NYFA Artist Fellow in Fiction from The New York Foundation for the Arts. Her writing has appeared Paris Review, Guernica, The New York Times Book Review, and Lit Hub, among other places.

On Black Brook Road, the Steiger house crouches in the trees. Although Louisa has seen pictures, even visited the construction site, it’s still a surprise that her husband has created this dark, private dwelling. It’s so different from their own glass house. A shadowed inverse. The new residents seem to have added little—no flowering bushes near the doorway, no bright frame of welcome. They’ve cleared only as much land as needed for the structure to be raised. The rest is dense forest. They’d requested that the windows be scaled down so as not to advertise themselves, as they put it, to the outside. Only a few apertures betray the glow of inner rooms.

Approaching the door with Richard, Louisa feels the unease of a girl visiting her parents’ friends. She touches the hem of her white suit jacket. Their daughter is between them in a dress of her own choosing, a secondhand wrap better suited to the beach, but Louisa hadn’t wanted to argue. Sylvie has been boycotting new clothing, new anything. It has something to do with the environment, the dictate of reduce, reuse, recycle. Her brown hair is threaded with strands of copper, the ends perpetually stringy. Louisa wishes she’d made her brush it in the car. It irritates and worries her that Sylvie doesn’t make the effort to groom herself. Her peers will shun her soon if they haven’t already.

“So wonderful to see you,” Agatha says, pecking each of Louisa’s cheeks. “What a lovely daughter.”

“We’re so glad you came,” Heinrich says, taking Louisa’s hand and kissing it.

The foyer is horizontally paneled in mahogany that reflects warm lamplight. It smolders with winter and secrecy. For a terrible moment, Louisa is unsure whether they should remove their shoes. But Heinrich and Agatha are wearing shoes, of course, and as they lead the way into the living room, Louisa realizes how ludicrous it would be for them to receive guests in stocking feet.

The living room is fully furnished as if it’s been that way forever, the walls decked heavily with gilt-framed paintings. “I can’t believe you’ve done all this in, what, three months?”

Louisa hears herself say in mock surprise, the default tone of polite adulthood.

“We were living in Nearwater already for a year, renting,” Agatha says. “Just waiting for this house to be done. Our furniture fit in perfectly, and the art.We were at home right away.”

The house already has an odor, woody and sweet. It reminds Louisa of a forested Austrian childhood she never had. She sits carefully on an antique settee with faded burgundy cushions and is struck by the incongruity of Richard’s design—its signature angles and off-center doorways—with these furnishings of a European manor. Still, Louisa prefers this quiet elegance to the brassy displays of clients like the Foxes. Richard had designed an asymmetrical cedar addition for the Foxes’ sprawling stone manse, as well as out-buildings in the same aesthetic vein to serve as shelters for their menagerie. That visit had been like stepping foot into Versailles or some Gilded Age pleasure garden. Even with its collection of extravagant creatures—everything from flamingos to lemurs—the estate seemed to suffer from a lack of imagination. It bristled with overindulgence, insecurity. The Raders had been lucky to visit, though, when Sylvie was small. The Foxes make few invitations anymore—not since the kindergarten field trip when a child was clawed by a wildcat. Sylvie had talked about the animals for weeks afterward. She’d especially loved the red pandas and, of course, the Bengal tiger.

Tonight’s visit won’t be nearly as exciting for her. Heinrich

extracts a liquor bottle from a carved cabinet. “Dubonnet?” he offers. Agatha gives a crystal glass of ginger ale to Sylvie, who droops in an armchair while her father circumnavigates the room. Louisa feels like a young girl herself, sitting primly on the settee. Here, her height, usually a source of pride and power, seems to suggest American excess. She feels gawky, unsophisticated. She was slow to understand how important the Steigers are in the international art world, even after Richard told her about the Kunsthaus Steiger in Vienna, stocked with their private collection. Their tastes range from Renaissance to modern, and the Kunsthaus holds everything from Dürer to Klimt. They own a few tamer Schieles, and a new wing features a foray into more contemporary works, although nothing transgressive: Lucian Freud, Neo Rauch, some photorealist Richters. In this room, too, there’s a mix of old and somewhat less old, all unsurprising. Each painting is illuminated by a hooded lamp.

As Richard approaches a painting, Heinrich offers, “This is a Rottmann. A nineteenth-century romantic, favorite of King Ludwig of Bavaria. One of my favorites, too, and quite rare.”

The name of the artist is unfamiliar to Louisa. She sips her aperitif and smiles at Agatha. Sylvie pages through a coffee table book, written in German.

“That’s a pretty good book, no?” Agatha asks with a wink, and Sylvie closes it. Her glass of ginger ale rests on the wooden table.

“Sylvie, use a coaster please,” says Louisa, although she sees none.

Agatha purses her lips and fans her hand as if waving the idea away. Sylvie leaves the glass where it is.

The men move to the next painting, a portrait of a noble-woman in rubies. Louisa has little patience for the history of trite art. These are exceptional pieces to be sure, in terms of scarcity, but aesthetically not much different than the minor Hudson River school paintings her parents had once hung on their own Nearwater walls. This careful class of people, no matter how wealthy, always seems to welcome daring architecture before daring art.

“You run the art center in town I hear?”

Louisa hears Heinrich’s oaky voice explaining that the woman in the portrait is a relative of some kind. She resists asking whether she’s a countess, whether Heinrich is technically a count. Or a baron. She isn’t clear on the difference.

“I agree,” Louisa answers. “Richard designed the expansion, you know. It used to just be an old carriage house. He kept the historic façade, but the gallery and studios are all new. And the audio building.”

“No one ever uses that, though,” Richard interjects. “Not yet, but we will,” Louisa says, smiling. “It’s my

favorite part of the center I think. Just gorgeous, like a jewel box in the woods. Completely black inside with soundproof walls and a retractable ceiling.”

“It would make a great observatory,” Richard adds wryly. “Some night we’ll take Sylvie there with a telescope.”

“He really is very talented,” Agatha says. “We’re so happy to have found him.”

Louisa smiles. The men shift to another painting. “This one is Achenbach,” she hears Heinrich say. “Unusual to see a genre scene like this from him.”

Agatha stands. “Sylvie, this must not be very interesting for you. Would you like to go to the TV room?”

Sylvie rises and skulks after her. When Agatha returns to her seat, she faces Louisa with a new freshness. “How long have you lived in Nearwater?” she asks.

“I grew up here, actually,” Louisa tells her. “It’s been twelve years since we came back.”

“I understand why you would,” Agatha says. “It’s a lovely town. I wish we’d found it sooner.”

Louisa nods, feeling unaccountably restless, and rises to her feet before she can acknowledge the impulse to stand. A row of framed photographs on the mantel gives her a destination, and she steps toward them under the pretense of getting a closer look at the painting above.

“This one’s lovely,” she says, pretending to study the landscape. A man leads a horse near the bank of a river, both figures expressed with a few touches of paint.

“That’s another Rottmann,” Heinrich offers. “Not as large as his more important works but just as painstakingly done.” “Yes, even the horse,” Louisa says, then drops her eyes to a photograph on the mantel. A handsome boy sits in a patch of sunlight with a drawing pad. He looks up at the camera, a black slice of hair past one eye, light skin in stark contrast. The other eye is caught in the sun, a startling blue.

“Where Gabriel?” Heinrich asks his wife. “He said he’d come up to say hello.”

“Oh, there’s no need for that,” Louisa says, putting the frame back on the mantel.

“Is he your only child?” Richard asks. “Yes,” says Agatha.

“Sylvie’s our only too.”

“She turned twelve in April,” Louisa says. “And Gabriel?

He looks to be about the same age.”

“That’s an old picture. He’s eighteen. Nineteen this fall.” “Oh, is he home from college?”

“No,” says Agatha. Louisa waits for more, but Agatha offers nothing else.

There’s no music. Only their four voices fill the room. Louisa looks at Agatha with a smile meant to represent goodwill and gratitude. She takes another sip of her aperitif, which is almost gone now. She’s begun to feel a warm radiance from the liquor, an intensification of the sense memory she had upon entering the house, the woodland familiarity. It suggests an intimacy with the Steigers. There’s something different about them, beyond the fact that they’re foreign, an implacable serenity that both attracts Louisa and unsettles her. They seem deeply comfortable with themselves and each other. Composed, genteel, kind.

They discuss Nearwater and its neighboring towns. The most prestigious, there’s no need to mention, is their own. “Louisa grew up here, actually,” Richard says with a note of pride, putting a hand on her shoulder.

Agatha smiles at her with warm, assessing eyes. “Yes, she mentioned that.”

“Nearwater’s a great investment,” says Richard. “And the taxes pay off with the school system.”

Agatha and Heinrich smile thinly. Louisa shoots a look at her husband, who remains oblivious. At that moment a young man enters the room. He comes toward them with fluid movements, and Louisa puts her glass down. She’s struck by his height and posture. Although he wears ripped jeans and a loose black T-shirt, there’s something authoritative in his bearing.

Louisa stands to shake his hand and feels that she’s touched a socket. She pulls away quickly. She watches him grip her husband’s hand, quick and firm, and deliver an easy smile.

“It’s a pleasure to meet you both,” he says.

Literary villains who were actually just suffering from burnout.

To Fall in Love, Drink This by Alice Feiring, Read by Gabra Zackman 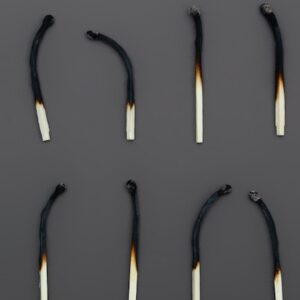 Literary villains who were actually just suffering from burnout. In case you haven't read mainstream periodical, Substack, lifestyle website, or know-it-all's Twitter feed in the past two years:...
© LitHub
Back to top