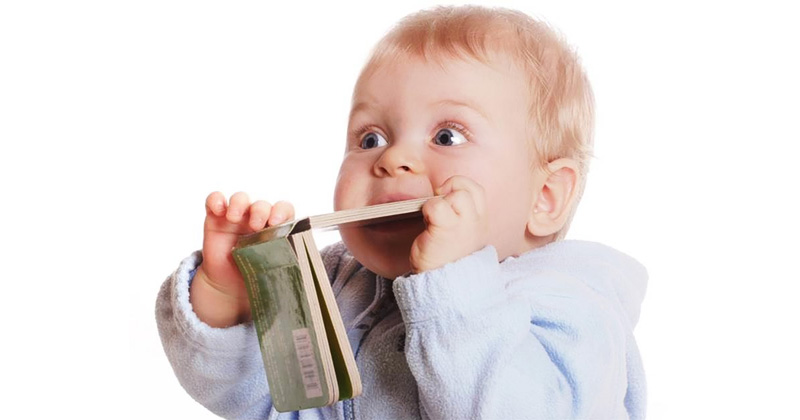 Children's Literature was Once All Work and No Play

As my 13-month-old son tips over the tall orange tub, his vast collection of board books cascades across the carpet. He pushes them from atop one another so he can see all the covers to assess his options: two have owls, two Curious George, two Max and Ruby, two Sandra Boynton of course; big trucks, first words, baby animals. He pauses to gnaw on the spine of a small sparkly book unable to resist the allure of previously chewed, splayed out paper bits.

After settling on the colorful Eric Carle classic Brown Bear Brown Bear, What Do You See? he toddles over to where I am sitting on the floor, turns around, nestles backward into my lap, and flips open the book.

My two older kids liked books fine, but were never this eager or interested at such a young age. Perhaps it’s because when he brings me a book, everything else stops and I am suddenly speaking to and giving attention only to him—not his brothers or my work emails or the dinner dishes. But it’s not just the story or even the pictures that intrigue him—he loves manipulating the book itself.

Board books—those roughly 6” square books printed on thick paperboard that average a dozen pages or so, with vibrant illustrations and a sentence per page—are ubiquitous nowadays. And their popularity shows no sign of abating. Indeed, they have seen some of the largest growth of any book category: According to Nielsen, sales rose 7.4 percent over the previous year in 2016. And from 2010 to 2015, sales skyrocketed from 17 million units to 31 million units.

But where did it all start: when did we first think to make books catering to the sensibilities and durability needs of small children?

Dr. Allison G. Kaplan from the Information School at the University of Wisconsin, Madison, became similarly curious a few years ago. But after spending four weeks trawling the Baldwin Library of Historical Children’s Literature at the University of Florida, she found that the progression of board books was not as linear as she’d hoped.

“I went searching for the first board book, but I didn’t really find it,” she says, explaining that it’s a tough thing to research because “these things were considered toys; nobody kept them, or they were so well loved they kind of disintegrated.”

The closest she came to an origin story was finding A Peep at the Circus, published in the 1880s and described as “pages pasted on cardboard.” “[It] nearly had me weeping with joy because . . . it could be considered nothing less than a board book. It was this book that led me to believe in my quest,” Kaplan wrote in her report on this self-described “preliminary investigation” into the history of board books.

Up until about the 19th century, children’s books typically focused on religious or moral tales. Until then, books intended primarily as entertainment were generally scarce. Enjoyable, durable children’s books didn’t become common until around the mid-1800s.

The evolution of children’s books’ themes and physical forms was a reflection of society’s changing ideas about childhood and education. Philosopher Jean-Jacques Rousseau’s 1762 Émile, or On Education proposed that children were innately innocent, not born full of sin. This concept trickled down into the writings of Romantic poets and thinkers and really took hold during the Victorian age. The idea that kids should enjoy their childhood then paved the way for children’s literature. The emergence of small, sturdy books with simple, pleasant content was a manifestation of our burgeoning understanding of the important role enjoyment and imagination could play in a child’s education and development.

Some of the earliest schoolbooks had been incredibly durable—but they weren’t exactly books per se. In the 1500s, children learned their letters using a hornbook, which was a single sheet of paper containing the alphabet and the Lord’s Prayer attached to a wooden paddle with a handle. A sheath of transparent horn covered the front to protect it from wet or dirty hands.

Printing advances during the 16th and 17th centuries saw the first expansion of children’s literature. In addition to primers and religious texts, there were now fables, satires, histories, conduct manuals, treasuries, and collections of puzzles, songs, riddles, and poems. John Newbery is generally considered to be the first to publish books intended for children’s enjoyment rather than for educational purposes. On each page of his 1744 publication A Little Pretty Pocket Book is a letter of the alphabet, an illustration, and description of an associated activity or game.

According to Kaplan, Newbery’s books were notable “because they reflected a deliberate departure from religious and moral education stories to present books to children that were fun, filled with adventure, and entertaining.” Following his “experimental, yet rather profitable, example,” most children’s books adopted this more-playful mood.

But historians tend to overstate the idea that enjoyment was entirely absent as an intention of children’s books before this time: While books “were used to educate children . . . they were not the purely instructional texts so often assumed,” explains editor Adrienne E. Gavin in the The Child in British Literature: Literary Constructions of Childhood. John Locke was already suggesting that children learning to read should be given easy, pleasant books that included pictures in his 1691 treatise on education.

Still, not everyone agreed on what made for engaging, age-appropriate content in children’s books. Samuel Johnson, a prominent 18th-century English writer, was less-than-enthused by Newbery’s volumes. He is recorded as telling a friend: “Babies do not want to hear about babies; they like to be told of giants and castles, and of somewhat which can stretch and stimulate their little minds.”

These assertions were shaped by Johnson’s own early life experiences with books: “He first learned to read of his mother and her old maid, Catherine, in whose lap he well remembered sitting, while she explained to him the story of St. George and the Dragon. The recollection of such reading as had delighted him in his infancy made him always persist in fancying that it was the only reading which could please an infant, and he used to condemn me for putting Newbery’s books into their hands, as too trifling to engage their attention.”

Lewis Carroll’s Alice’s Adventures in Wonderland (1865) is often cited as one of the first purely fantastical books aimed at children. It was followed by “a rich vein of literature which connected childhood with the fantastic, the imaginative, and the entertaining, and whose primary aim was to delight child readers,” notes Gavin. But as with all trends, there was pushback: “Both rational and religious resistance to fantasy in children’s texts were evident.”

In British Children’s Books in the Twentieth Century, this pushback is depicted as a pendulum dwindling in momentum: “With each swing . . . the reaction towards didacticism became less pronounced and the books produced became easier to read and enjoy. It is possible, therefore, to see the whole history of British children’s publishing as a development towards freedom—freedom of expression, thought, and above all, imagination.”

Around the mid-1800s, further technological and social changes had converged to promote book ownership. Advancements in paper making and printing technologies, coupled with improved transportation, meant books became significantly easier and cheaper to produce and distribute. At the same time, new ideas about the importance of educating all children—and the subsequent rise in literacy rates—increased the demand for printed materials for kids.

British publishers responded by creating beautiful multicolored, richly illustrated books printed on increasingly sturdy materials and aimed at an increasingly younger audience. The subsequent books were the precursors to the board books we know today.

In 1902, Henry Samuel Dean of Dean & Son publishing created the first fully-cloth book out of cotton, calico, or linen. According to the Arne Nixon Center for the Study of Children’s Literature, Dean “designed his line of rag books specifically for the use of children, who ‘wear their food and eat their clothes.’” Marketing campaigns “emphasized the indestructible and ‘hygienic’ nature of the books.” And a history of Dean’s rag books states that “an imaginative range of sales ads” were employed to show how the books could be laundered, including a window display with an electric fountain “in which books were displayed suspended from arms radiating from the centre and sprayed by jets of water; the power being supplied by an electric turbine concealed in the bottom of the bowl.”

It was also around this time that child mortality rates were improving: “The attitude toward children developed from soulsaving to nurturing,” Kaplan explains. The curators at the Arne Nixon Center say they “can readily see this transition by comparing the macabre King Gobble’s Feast [published in 1867]—wherein a too-prideful turkey meets with capital punishment—with the playful ABC and rhyme books that would follow just a few years later.”

Cloth books were designed not just for indestructibility, but also for independence. Books with fragile pages could only be trusted to older children or adults; cloth books were thought to be a way for young children to explore books without supervision. The 1938 cloth book Cottontails was one of the first tactile books. It had fluffy cotton balls sewn to bunnies, buttons as train wheels, and red beads for apples in trees. Cottontails opened the door to “a veritable blaze of cloth books, all stemming from the same reforming, child-serving impulse, all simply and gaily designed, all silk-screened onto good cloth, all washable, pressable, chewable,” writes Barbara Bader in her exhaustive compendium “American Picturebooks from Noah’s Ark to the Beast Within.”

But the world wars bookending this period also meant the rationing of cloth. “There’s a connection between both wars and the development of board books,” Kaplan says. “Partly they developed over necessity—there was a market and other materials were scarce. Partly because board books are easier for children to handle.”

Around the mid-1900s, the commercial growth of children’s literature increased exponentially. According to Kaplan, between 1920 and 1950, “publishing early literacy books for the very young child virtually exploded.” Board books started to become commonplace in homes, and many of the titles produced in this period remain staples to this day, like Pat the Bunny (1940).

Initially, these books were only marketed to preschool-age children; it wasn’t until the second half of the 1900s that infants and toddlers were targeted. Educational theorists had begun to uncover the incredible impact on literacy of exposing children to books well before they were ready to read. Most board books were reprints of preexisting books, but between the 1960s and ‘80s, author/illustrators like Gyo Fujikawa, Helen Oxenbury, and Sandra Boynton pioneered the idea that board books were worthy of a genre—and content sensibilities—all their own.

Of course, any book can be read to small children. And sharing stories orally from memory has surely been a staple of family life long before the invention of books. What’s unique about board books is that they offer a chance to introduce babies and toddlers to the physical properties of books in a safe environment—“they can touch without fear of paper cuts,” Kaplan says. “Board books invite caregivers to give babies an opportunity to explore something they’ll be using their whole life.”

Here’s hoping that my youngest son continues to be as enthralled with books as he is now, when they can be read as well as chewed. I may finally have a bookworm on my hands. 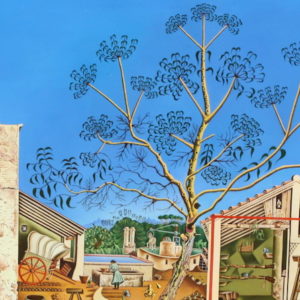 The ravishing descriptions in A Moveable Feast give a strong taste of the powerful role that art played in the life and thought...
© LitHub
Back to top