The Girl Who Left, The Woman Who Stayed: Finding Georgia O’Keeffe in a Small Southern Town

Megan Mayhew Bergman on Where We Find Our Home

I can’t justify it, but sometimes I dream of purchasing an old house on the street where my mother lived as a child, vaguely believing that if I did I might come to understand something deeper about myself. Or perhaps I might come to feel at home, a feeling I crave after years of living in New England, far away from the small Carolina town where I was raised.

With this fantasy, I often feel that I am reaching back to a genesis point I never lived entirely, but inherited, and then narrativized. The fantasy occupies an animated rural Virginia landscape, like something from a William Eggleston Kodochrome photo: a woman in a polyester dress, smoking a cigarette in her sedan as she drives slowly past a field of tobacco, the same field her mother and grandmother have driven past for decades. Perhaps they have just come from a church fellowship supper, or are bringing stems of iris to a sick relative. The images feature a matrilineal line I never knew, but must carry inside of myself. It is a necessary fabrication, something to fill an empty space.

I teach a class at Middlebury called “Landscape and Memory,” which explores the flow between person and place. We talk about formative landscapes and write toward the sensory details we can grasp: the scent of mud in a warm spring wind; the veil of southern humidity on skin; the rough bark of a slash pine against the palm of your hand. We are essentially trying to conjure place with words, and in doing so, understand what aspects of that place have pressed down upon us and shaped us into the humans we are.

What feels more amorphous to me is the landscape I didn’t know, but is surely in me. Though the field of epigenetics is still emerging, we know that the stress of extreme weather events and hunger leave genetic marks. I hold a mystery of place-based knowledge inside of my body, unreachable by words, but perhaps born out in my relentless orientation toward the sun, a taste for southern greens, my restless and tempestuous nature.

My grandmother and O’Keeffe were two different types of women, and I feel both moving inside of me

There is also the narrativized landscape each of us metabolizes year over year; we feed on our parents’ stories. For me, the locus point of this inherited landscape is Chatham, Virginia, a small town between Richmond and Danville on Highway 29. It is a leafy, quiet town, home to Hargrave Military Academy, and Chatham Hall, a private school that Georgia O’Keeffe attended.

My mother, whose own mother passed away when she was young, was raised by her grandmother, Nellie, in a house on Chatham’s Main Street, where she could walk to school or the church where her mother, Alice, played the organ before she became sick. My mother remembers the house but especially the grounds. In an email, she wrote:

There was a colorful garden of flowers blooming year-round. In early spring there was an abundance of daffodils of all shapes, colors and sizes, and lovely pink and white flowering dogwoods. In the summer we could always count on a bed of many varieties of iris and roses, as well as rows of peonies in gorgeous shades of pink. There were zinnias, columbine, daisies, gladiolas, pansies, nasturtiums and so many other types of flowers to make lovely flower arrangements. There were bunches of bright red nandina berries in the winter for Christmas arrangements. I was always amazed to walk in the garden with her on Saturdays and watch as she cut different flowers to make a spectacular arrangement for our church sanctuary on Sunday morning. In addition to a flower garden, we also grew a vegetable garden each summer and spent so much of our time picking and shelling beans and shucking and freezing corn.

I’ve only driven through Chatham a handful of times: years when my parents attended their class reunions or a relative died. The visits are layered in my memory; I can’t tell one from another, but recall a hollowed-out downtown with a whiff of charm, winding roads on the way to my grandfather’s tobacco farm, and always the gray, melancholy sense of my mother’s sadness as she recalled life on Main Street, growing up in the 1960s without a mother. 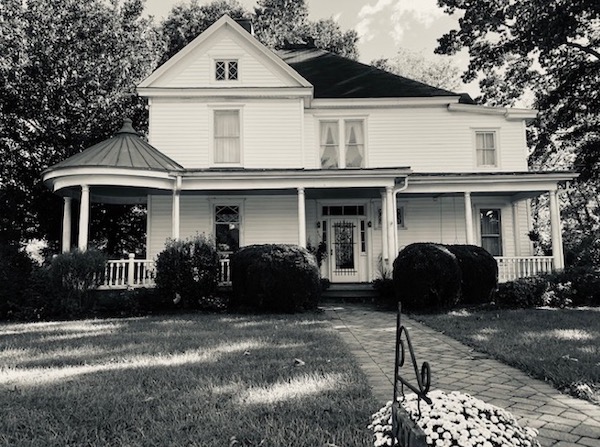 My maternal great-grandmother Nellie once held me on the front porch of her house in Chatham. She was tall and serious, an exacting perfectionist who divorced an alcoholic husband and organized temperance meetings in her home. She made the floral arrangements for church. I writhed in her arms as an infant but never knew her, and as I aged, with my (problematic) middle-class mindset of thrusting myself forward into the world away from my roots, I thought of her very little.

Nellie Hughes Dodd Pickrel was born in 1891 and died on the cusp of 90 in 1981, just before I turned two. She was six years older than Georgia O’Keeffe and would have lived in the small town of Chatham—population 1,400—when O’Keeffe was both a student and teacher there.

How vividly I recall the first night Georgia walked into study hall at Chatham Episcopal Institute! As I had been in school a few days, perhaps a week, I felt perfectly competent to criticize this late-comer, especially as she was unusual looking. The most unusual thing about her was the absolute plainness of her attire. She wore a tan coat suit, short, severe, and loose, into this room filled with girls with small waists and tight-fitting dresses bedecked in ruffles and bows. Pompadours and ribbons vied with each other in size and elaborateness, but Georgia’s hair was drawn smoothly back from her broad, prominent forehead and she had no bow on her head at all, only one at the bottom of her pigtail… Nearly every girl in that study hall planned just how she was going to dress Georgia up, but her plans came to naught, for this strong-minded girl knew what suited her and would not be changed.

I can only imagine my traditional great-grandmother, steeped in the ways of the small southern town which she rarely left, catching sight of O’Keeffe on the streets of Chatham. My great-grandmother owned a restaurant and was a celebrated southern cook, known for her coconut pies and yeast rolls. I wonder: Did she ever serve a young woman in a tan suit? And if so, what did she think?

Georgia O’Keeffe with the Class of 1905. Photo via Chatham Hall Archive.

O’Keeffe was not a strong student, nearly failing out of school due to her spelling. She was surrounded by the daughters of ministers and women who were not accustomed to working or using their hands. In an interview she told Calvin Tomkins, “I’d go for long walks in the woods, which wasn’t allowed. I wouldn’t read my French lesson aloud to myself three times, as we were told to do, and in class when the teacher asked whether I had done it I would say no—that I didn’t have the time for that.”

Later, O’Keeffe said of the landscape: “Virginia was beautiful. I used to go walking through the hills, but eventually I felt like I knew every tree in the forest.” My mother recalls that she could see those same hills from the second story of her house in Chatham.

Allegedly, when O’Keeffe left Chatham, she remarked: “I am going to live a different life from the rest of you girls. I am going to give up everything for my art.” For me, O’Keeffe’s singularity and individualism represented a pinnacle, an artistic purity and freedom one could work toward. For years, I thought this was the woman I’d like to become.

One of O’Keeffe’s canvases, Pink Moon Over Water, even graces the cover of my third book. It’s the cover I like best of all the ones I’ve had before. It’s beautiful and frank—the kind of work a woman makes when she is unencumbered and clear-headed.

When my mother remembers Nellie, she recalls a woman who made sure her neighbors had enough to eat, always bringing freshly cut flowers and her cakes, pies, and rolls. As an adult with my own two children to raise, I find myself amazed that Nellie had the energy to look outward. She was a single, aging grandparent who provided for herself and two grandchildren, raising them after burying her own daughter. She tended to a sizable house, kept a tenant, managed large gardens, cooked, canned, made floral arrangements for church—and still had time to care for her neighbors. What once seemed traditional to me now seems revolutionary in its generosity.

My grandmother and O’Keeffe were two different types of women, and I feel both moving inside of me: the one who gathers her family at the table, and the one who leaves. What I understand now is that they are not mutually exclusive personas. Sometimes the right action involves actualizing the self; often it involves holding your community together, making an extra plate of food, offering a place to sleep. 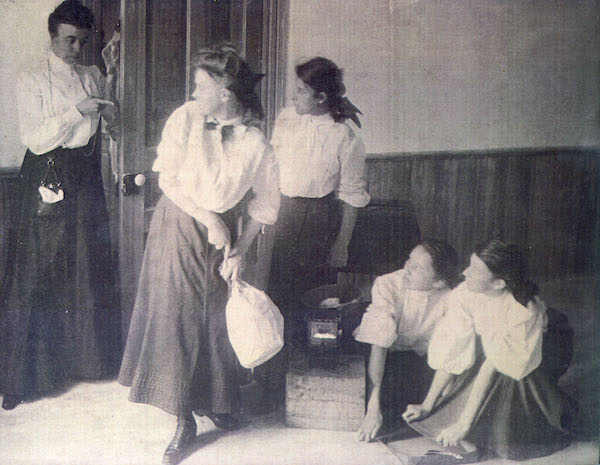 photograph with May Willis, head of the school Georgia O’Keeffe attended. Photo via Chatham Hall Archive.

This April, while down south on book tour, my uncle arranged a visit to the Chatham house on Main Street. My mother had not been inside the house in 40 years. When she walked towards it, she turned to look at me, and I could see both delight and pain in her eyes. I felt a pang of resonance within the walls of my own chest. My mother took in the familiar beauty of a sloping lawn. Here was the pecan tree, still standing. Here was an old bedroom. From the windows of the second story, we could see the rolling hills of Chatham Hall where O’Keeffe walked.

When we undertake writing exercises in my Landscape and Memory class, we write about playing in rivers as children, hiding behind large trees, plucking sun-baked exoskeletons from hot sidewalks. I think of how people say you can never stand in the same river twice. We reach back to ask ourselves what we have carried, and to consider what and whom we will inevitably leave behind.

After Steve Jobs, The Flood: Apple Without Its Emblematic and Enigmatic Founder 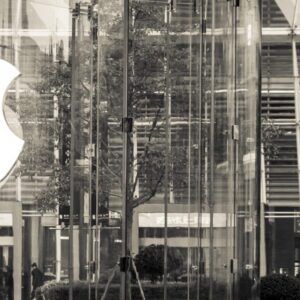 After Steve Jobs, The Flood: Apple Without Its Emblematic and Enigmatic Founder Jony Ive steeled himself outside the stately two-story home in Palo Alto. It was early Tuesday morning, October 4, 2011,...
© LitHub
Back to top
Loading Comments...