The following remembrances of James Salter, who died June 19, appear as part of a larger collection in memoriam, at American Short Fiction.

In the summers of the late 1980s I was helping to co-direct with Nick Delbanco the Bennington Summer Writing Workshops. A few old friends of mine were spending some time at Yaddo, the relatively close-by former estate of an American railroad mogul turned into an elegant artists colony where I had spent some wonderful months myself not long before.

Yaddo was a place where you learned how to manage your time. A wonderful chef prepared delicious meals for all the residents. In the age of the pay phone, you kept your calls to a minimum. The only thing you had to do on your own was your laundry. So most of your time there became writing time and reading time. With, of course, as was the way for many of us then, some drinking time and other pleasurable activities.

My friends there introduced me to a few writers. One of them was James Salter, one or two of whose early stories I had read and much admired. He was staying in the same room, a large space just above the estate’s carriage house, where I had stayed. We talked a little about how pleasant it was to have light pour in from windows on three sides of the room, and that the space seemed to inspire fluid work. John Cheever had stayed in that same room many years before. It was a good place to work.

Yes, it was, Salter said. He had just finished a story called “American Express,” something he thought might be a pretty good piece of work. I asked him if he might like to come over to Bennington and read it to the participants in the summer workshop. Imagine my dismay when he looked at me and said, in that distinctive slightly nasal New York City accent of his, “Oh, well, that sounds interesting. I’ve never read in public before…”

(There’d been one earlier, aborted attempt at a reading, he explained, at a small New England college to which he had been invited, but a snow storm wiped out the event).

And so he drove over the next week. In shirtsleeves that muggy evening he took to the podium of the college’s auditorium, a large amphitheater-like space that did not show its best qualities in mid-summer. But after listening to the opening lines of that new story of his, not many of us assembled there, ancient and middle-aged writers and novices alike, paid much attention to our surroundings.

He took us places we had never been before, he took us places we had looked at before but never really seen, with lines jammed with just the right nouns, he prepared us, as a matador prepares a bull for the kill, for the exact verbs that would carry entire paragraphs, entire passages, the entire story into a beyond where all of us lived together in a momentary clarity, the paradise of language to which all writers aspire to ascend and in which few reside.

Alan Cheuse is the author of five novels, five collections of short stories and novellas, and the memoir Fall Out of Heaven. He’s been reviewing books for NPR’s All Things Considered since the 1980s.

The fall was coming. Everything seemed to deny it. The days were still warm, the great, terminal sun poured down. The leaves, more luxuriant than ever, covered the trees. Behind the hedges, lawn mowers made a final racket. On the warm slate of the terrace, left behind, a grasshopper, a veteran in dark green and yellow, limped along. The birds had torn off one of his legs.

This story, which I first read in Best American Short Stories 1984 (almost certainly while riding the F train between Brooklyn and Manhattan), was my introduction to Salter’s work. I was trying to learn how to write stories myself, and this one struck me for the stark beauty of its sentences and the strange, voyeuristic feeling it left me with. A 19-year-old Dutch girl, Truus, takes a job as an au pair in the Hamptons, working for a divorced woman and looking after her 6-year-old son. She meets a young man who is on vacation from Saudi Arabia where he works, or at least that’s what he tells her. She sleeps with him. He leaves, but continues to send her letters. When Gloria, Truus’s employer, secretly reads some of these letters—which turn out to be obscene, and even suggestive of illegal activity—she ends up firing the girl, certainly unfairly.

Truus, “nineteen, and in sulky bloom,” is the story’s erotic center, but she might not be the main character. I’m not actually sure “Foreign Shores” has a main character, which is part of what intrigues me about it, still. The point of view is omniscient, with only limited, momentary access to people’s thoughts; most of the story is cinematic, just setting and dialogue. The result is that all the characters seem mysterious, their motivations obscure, their actions and choices as much a part of this sensuous, privileged landscape as the sound of the mowers, the warmth of the slate, that military amputee grasshopper. Everything is suffused with the low hum of sex and secrets. We never know what Truus thinks of the letters she’s been getting. Does she find them erotic? Do they repel her, but fascinate her at the same time? Does she simply not understand that she has other options? It hardly matters—Truus will leave, pushed out of this temporary summer world, in an almost naturalistic way, by forces beyond her control. Life moves on, casually, brutally. When, a few years later, Gloria—no longer with her boyfriend, Ned, who is marrying a younger woman—thinks she has seen a photo of Truus, with her “bad makeup and the morals of a housefly,” in Town and Country, her despair is evident: “The idea that there is an unearned happiness, that certain people find their way to it, nearly made her sick.”

Two years after reading “Foreign Shores,” I was assigned to Jim Salter’s workshop at Iowa, the first time (I believe) he’d ever taught. It took me a while to connect this handsome, middle-aged gentleman to the author of the story I’d found so memorable and unsettling. Jim’s demeanor and appearance were as graceful and controlled as his prose. He mostly said nice things about our work, occasionally admiring a poetic phrase, or declaring a story had “good bones.” I had the feeling that he didn’t think there was much he could tell us about how to write. You read other authors you admired—in his case, clearly, he’d been influenced by Hemingway—and then you wrote. He and his wife, Kay, were renting a house in town for the year, and a friend and I were invited over to play touch football with him a few Sunday afternoons (apparently, he’d been part of a literary touch football game back in Southampton, along with John Irving and some other impressive names I can’t now remember). Jim was too old, or maybe just too dignified, to do any running, but he loved throwing the ball, and his passes were strong, accurate spirals. I learned from him what a Gibson is (martini with cocktail onions—very nice), and how to crack an ice cube with the back of a spoon (apparently it interacts better with the gin). About how to write a story as good as “Foreign Shores,” I suspect he had no specific advice. It’s not something to analyze, really. You aim and throw, just hard enough to make it hurt.

Geoff Becker is the author of two novels, and two story collections. He teaches writing at Towson University in Baltimore. 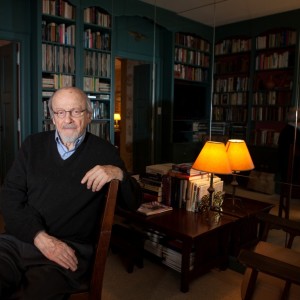 Remembering the first reading James Salter ever gave. | Literary Hub On our lingering obsession with Joan Didion,...
© LitHub
Back to top