The Fire Next Time is Here: Jesmyn Ward on Race in America

After George Zimmerman shot and killed Trayvon Martin on February 26, 2012, I took to Twitter. I didn’t have anywhere else to go. I wanted to hear what others, black writers and activists, were thinking about what happened in Sanford, Florida. Twitter seemed like a great social forum, a virtual curia, a place designed to give us endless voice in declarations of 140 characters or fewer.

I found the community I sought there. I found so many people giving voice to my frustration, my anger, and my fear. We shared news and updates and photos, anything we could find about Trayvon. During that time, I was pregnant, and I was revising a memoir about five young black men I’d grown up with, who all died young, violent deaths. Every time I logged in or read another article about Trayvon, my unborn child and my dead brother and my friends sat with me. I imagined them all around me, our faces long with dread. Before Zimmerman was acquitted of second-degree murder and manslaughter in July 2013, I suspected Trayvon’s death would be excused. During this period, I returned often to the photo of Trayvon wearing a pale hoodie. As I gazed on his face—his jaw a thin blade, his eyes dark and serious, too big in the way that children’s eyes are—I saw a child. And it seemed that no one outside of Black Twitter was saying this: I read article after article that others shared on Twitter, and no major news outlet was stating the obvious. Trayvon Martin was a 17-year-old child, legally and biologically; George Zimmerman was an adult. An adult shot and killed a child while the child was walking home from a convenience store where he’d purchased Skittles and a cold drink. Everything, from Zimmerman stalking and shooting Trayvon to the way Trayvon was tried in the court of public opinion after his death, seemed insane. How could anyone look at Trayvon’s baby face and not see a child? And not feel an innate desire to protect, to cherish? How?

And then I realized most Americans did not see Trayvon Martin as I did. Trayvon’s sable skin and his wide nose and his tightly coiled hair signaled something quite different for others. Zimmerman and the jury and the media outlets who questioned his character with declarations like He abused marijuana and He was disciplined at school for graffiti and possessing drug paraphernalia saw Trayvon as nothing more than a wayward thug. They didn’t see him as an adult human being, either, but as some kind of ravenous hoodlum, perpetually at the mercy of his animalistic instincts. Although this was never stated explicitly, his marijuana use and adolescent mischief earned this hoodlum in a hoodie his death.

I knew that myth. It was as familiar to me as my own eyes, my own nose, my own hair, my own fragile chest. It was as familiar to me as the air I grew up in, air as dense and heavy and close and hot as the air Trayvon breathed before Zimmerman shot him. I, too, grew up in a place that could sometimes feel as limiting and final as being locked in an airtight closet, the air humid and rank with one’s own breath and panic. A place where for all the brilliant, sundrenched summer days, there is sometimes only the absence of light: America, and the American South. A place where the old myths still hold a special place in many white hearts: the rebel flag, Confederate monuments, lovingly restored plantations, Gone with the Wind. A place where black people were bred and understood to be animals, a place where some feel that the Fourteenth Amendment and Brown v. Board of Education are only the more recent in a series of unfortunate events. A place where black life has been systematically devalued for hundreds of years.

In December 2002, my then senator, Trent Lott, attended a function honoring the outgoing Senator Strom Thurmond, who is famous for opposing the Civil Rights Act of 1957 so strenuously he conducted the longest lone filibuster ever, one that lasted 24 hours and 18 minutes. At this event, Lott, who is from a small town on the Mississippi Gulf Coast around 25 miles from mine, said: “We’re proud of it [voting for Thurmond in the 1948 presidential election]. And if the rest of the country had followed our lead, we wouldn’t have had all these problems over all these years, either.” It was dismaying to hear this, to see what those in power thought of people like me, but it wasn’t a surprise. After all, when I participated in Presidential Classroom in Washington, D.C., I, along with around five of my high school classmates, met Senator Trent Lott. My schoolmates were white. I was not. Trent Lott took a whip as long as a car off his office table, where it lay coiled and shiny brown, and said to my one male schoolmate who grinned at Lott enthusiastically: Let’s show ’em how us good old boys do it. And then he swung that whip through the air and cracked it above our heads, again and again. I remember the experience in my bones.

I know little. But I know what a good portion of Americans think of my worth. Their disdain takes form. In my head, it is my dark twin. Sometimes I wonder which of us will be remembered if I die soon, if I suffocate in that closet. Will I be a vicious menace, like Trayvon Martin? An unhinged menace, like Tamir Rice? A monstrous menace, like Mike Brown? An unreasonable menace, like Sandra Bland? A sly menace, like Emmett Till? I imagine I will be as black and fetid as the horde at Scarlett’s heels, crowding her wagon, thundering to rip it apart, wheel by rivet.

Replace ropes with bullets. Hound dogs with German shepherds. A gray uniform with a bulletproof vest. Nothing is new.

I needed words. The ephemera of Twitter, the way the voices of the outraged public rose and sank so quickly, flitting from topic to topic, disappointed me. I wanted to hold these words to my chest, take comfort in the fact that others were angry, others were agitating for justice, others could not get Trayvon’s baby face out of their heads. But I could not. The nature of the application, even the nature of the quality journalism of the time, with so much of it published online, meant that I couldn’t go to one place for it all. I couldn’t fully satisfy my need for kinship in this struggle, commiserate with others trying to find a way out of that dark closet. In desperation, I sought James Baldwin. I read Baldwin’s essay “Notes of a Native Son” while I was in my mid-twenties, and it was a revelation. I’d never read creative nonfiction like Baldwin’s, never encountered this kind of work, work that seemed to see me, to know I needed it. I read it voraciously, desperate for the words on the page. I needed to know that someone else saw the myriad injustices of living while black in this country, that someone so sharp and gifted and human could acknowledge it all, and speak on it again and again. Baldwin was so brutally honest. His prose was frank and elegant in turn, and I returned to him annually after that first impression-forming read. Around a year after Trayvon Martin’s death, a year in which black person after black person died and no one was held accountable, I picked up The Fire Next Time, and I read: “You can only be destroyed by believing that you really are what the white world calls a nigger. I tell you this because I love you, and please don’t you ever forget it.” It was as if I sat on my porch steps with a wise father, a kind, present uncle, who said this to me. Told me I was worthy of love. Told me I was worth something in the world. Told me I was a human being. I saw Trayvon’s face, and all the words blurred on the page.

It was then that I knew I wanted to call on some of the great thinkers and extraordinary voices of my generation to help me puzzle this out. I knew that a black boy who lives in the hilly deserts of California, who likes to get high with his friends on the weekend and who freezes in a prickly sweat whenever he sees blue lights in his rearview, would need a book like this. A book that would reckon with the fire of rage and despair and fierce, protective love currently sweeping through the streets and campuses of America. A book that would gather new voices in one place, in a lasting, physical form, and provide a forum for those writers to dissent, to call to account, to witness, to reckon. A book that a girl in rural Missouri could pick up at her local library and, while reading, encounter a voice that hushed her fears. In the pages she would find a wise aunt, a more present mother, who saw her terror and despair threading their fingers through her hair, and would comfort her. We want to tell her this: You matter. I love you. Please don’t forget it.

From the introduction to THE FIRE THIS TIME: A NEW GENERATION SPEAKS ABOUT RACE.

On the Politics of Europe’s New Literary Superstars

I’m Supposed to Protect You from All This 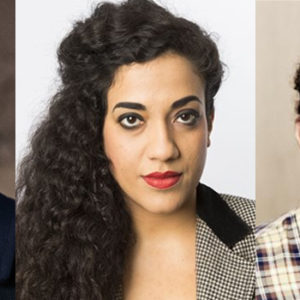 On the Politics of Europe’s New Literary Superstars

A new generation of young European writers is reinventing political literature—and people are listening. Some of the brightest...
© LitHub
Back to top