The Field of the Cloth of Gold 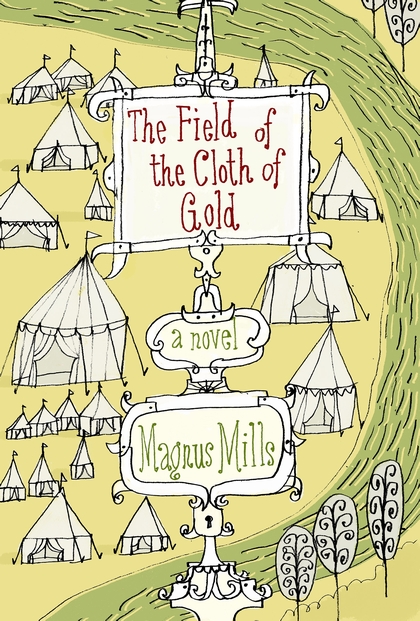 The following is from Magnus Mill’s novel, The Field of the Cloth of Gold. Mills is also the author of eight other novels, including The Restraint of Beasts, which won the McKitterick Prize and was shortlisted for both the Booker Prize and the Whitbread (now the Costa) First Novel Award in 1999. The Field of the Cloth of Gold was published to great critical acclaim in the UK and was shortlisted for the Goldsmiths Prize 2015.

After a week or so they sent round a message saying they had a surplus of milk pudding.

They said they were willing to share it with the rest of us if we went into their camp at noon. All they asked was that we brought our own spoons and dishes. The offer was undoubtedly generous, but we thought  the tone of the message was rather curt. Apparently there’d been some kind of blunder. From what we  could gather, the blame for the surplus lay squarely with their cooks: it seemed they’d measured the ingredients in the wrong  quantities.

‘What on earth do they need cooks for?’ said Isabella. ‘Can’t they do their own cooking?’

She’d been complaining about the newcomers for  days, and now she had grounds for further criticism.

‘I don’t know for sure,’ I said, ‘but I imagine it’s just a matter of organization. There’s a fair few of them, so they probably find it better to share the jobs around.

It’s called division of labour. Some act as porters, some take care of the tents, some wash the clothes, some do the cooking.’

‘Some do nothing,’ said Isabella. ‘Yes, I noticed that.’

‘Perhaps the orders are a necessary element,’ I said, ‘to keep the camp running smoothly. You have to admit it  all looks highly efficient.’

‘Well, if it’s so efficient,’ Isabella demanded, ‘why did they end up with a surplus of milk pudding?’

This was a good question. An error of such proportions was certainly out of character. Ever since they’d arrived their every move had appeared part of a carefully planned operation. We’d watched them cross the river from the south, bringing with them all manner of equipment, supplies and baggage. Teams of porters travelled back and forth in synchronized relays; accordingly there were no wasted journeys or misplaced items. Evidently they’d selected their ground in advance. We marvelled at the way they deployed their tents in a perfect grid formation. All the pitches were marked out precisely. Each tent was identical in size, colour and shape; each faced in the same direction; and each was separated from the next by exactly the same interval. Several command tents stood slightly apart from the main group. Between them ran a parallel thoroughfare which we’d already nicknamed the ‘high street’ because it was so busy with uniformed people coming and going. Every tent had a white pennant flying from its peak. When the work was finished the new encampment dominated the entire south-eastern part of the field. Along its boundary ran a low picket fence, and at each corner stood a flagpole. The camp had come into existence during the course of a single day, the process being overseen by a surveyor, a quartermaster and an inspector of works. Their logistical proficiency was astonishing to behold, yet despite all this they’d managed to produce a surplus of milk pudding.

‘An unfortunate lapse,’ I remarked.

Isabella gazed at the faraway tents; then she said, ‘I suppose you’re going to accept their  offer.’

‘Because they’re rude!’ she snapped. ‘They constantly ignore us, and they haven’t even bothered to come and introduce themselves formally.’

I could have mentioned to Isabella that she was equally guilty of that charge; actually, none of us had made the slightest effort to welcome the new arrivals. Instead we’d all remained aloof, observing them as they went about their task but never drawing near. As a consequence, and because there were more of them than us, we’d suddenly become the outsiders dwelling on the fringes. Now they’d made a gesture of hospitality, and Isabella was determined to reject it. As for going and formally

introducing herself, well that was quite beneath her. However, I knew from past experience that there was no point in arguing with  Isabella.

‘Have you spoken to the others?’ I asked.

‘So that leaves just me,’ I said. ‘A lone ambassador.’

‘I expect you’ll be alright,’ said Isabella. ‘It’s almost noon, so you’d better run along to the  feast.’

I glanced over to Hen’s tent. There was no sign of him, and I guessed he hadn’t been informed of the offer. I would have liked to let him know, but it was too late now. I checked my appearance to ensure I was tidy; then I headed off towards the south-east corner, feeling as I went that the eyes of the whole field were upon me.

It was a bright, blustery day, and the flags were flying. As I approached the outer row of tents I realized I hadn’t trodden this stretch of land for a long, long while. The grass grew thick and lush beneath my feet, and I remembered how attractive this area had looked when I first saw it. On close inspection the tents turned out to be surprisingly small. They were buff-coloured and plainly utilitarian, with a single pole and a canopy rising to a point. The comfort of the occupants had patently not been taken into consideration. Even so, the fabric looked sturdy enough to resist the harshest of weather. The command tents were of the same design but much larger, and one of these served as a cookhouse. I had just paused outside it, uncertain of the correct protocol, when an abrupt blast from a trumpet signaled noon. (This trumpet was prominent on Isabella’s list of complaints: it sounded daily at dawn, noon and dusk, and never failed to irritate her. Isabella preferred to get up at least three hours after sunrise; if her sleep was interrupted it put her in a bad mood for most of the day. Personally, I quite liked to hear the trumpet’s distant tones through the soft walls of my tent, but at short range even I had to confess it was a bit too loud. In fact, it made me jump.) All at once people began to converge on the cookhouse. A flap parted and a man appeared  who I recognized as the messenger. With a wave of his hand he summoned me  inside.

‘Excellent,’ he said. ‘You’ve brought your dish and spoon. I’ll put you at the front of the  queue.’

There were already several people lining up at a counter, but he led me straight past them and presented me to the cooks.

‘Make sure he has a generous helping,’ he ordered, before slipping away.

I thought the cooks looked a little disconsolate. There were three of them, and they each wore a white cook’s hat. They stood behind some large cast-iron vessels, stirring the contents sullenly.

It was a question I hadn’t been expecting. To tell the truth I’d never sampled milk pudding, so I wasn’t sure which to choose.

‘What do you recommend?’ I enquired.

‘Do you want it sweetened or salted?’

He peered at my dish and I held it out; then, unceremoniously, I received a large dollop of milk pudding. I thanked the cooks and turned away just as the messenger came back. He seemed slightly harassed.

‘Where are your companions?’ he asked. ‘I’ve been looking out for them but they haven’t arrived yet. I hope they won’t be much  longer.’

The expression that crossed his face was a mixture of consternation and sheer puzzlement.

‘Yes,’ I replied, trying my best to be tactful, ‘but I’m the only one who likes milk  pudding.’

‘Really?’ The messenger thought for a moment. ‘No doubt Aldebaran will want a word with  you.’

He indicated some nearby trestle tables, then left me to enjoy my pudding. I found a place and sat down. The other diners were friendly enough, although they didn’t make conversation; not in my presence anyway. The tent creaked and shuddered as the breeze freshened.

After a while I became aware of somebody standing over me. I looked up. It was one of the men I’d seen giving orders when the camp was being established. He didn’t announce himself, but I guessed this was Aldebaran.

‘Please,’ he said, ‘finish your pudding.’

I nodded obediently, and he took the seat opposite mine. A few minutes passed in silence: not until my dish was empty did he speak again. ‘I understand your comrades won’t be joining us?’

‘That’s alright,’ he said. ‘All the more for you. You can come back tomorrow, and the next day, and the day after that if you wish. We want to use up all the pudding before we make any more.’

Aldebaran inclined his head as if my words of gratitude were completely unnecessary. There was, however, another question.

‘She owns the crimson tent,’ I added, ‘over in the east.’

‘She swims every day, does she?’

Aldebaran glanced at the cooks. They were still standing behind their counter, serving milk pudding to latecomers.

‘Isabella,’ he repeated to himself. ‘I wonder if she’s the reason?’

He drummed his fingers on the table. I happened to look down, and in the same instant I realized that my spoon and dish were gone. They must have been tidied away during our conversation. When I mentioned this to Aldebaran he told me not to  worry.

‘Let the cooks take care of them,’ he said. ‘It’ll help keep their minds on the job: they’ve had too many distractions lately.’

He rose from his seat, gave me a polite nod, and prepared to leave.

‘Come back tomorrow at noon,’ he said, ‘if you wish.’ Once he’d departed I thanked the cooks again, then went outside. The idea had occurred to me that I didn’t necessarily have to return the same route I’d come. I decided instead to stroll down the ‘high street’, between the rows of tents, until I reached the river. Nobody objected, apparently, so I continued on my way. The breeze was still rising and all the flags were at full stretch: it was a pronounced change from the sultry conditions we’d become accustomed to of late. Actually, when I

thought about it, life over the recent weeks had been extraordinarily sedate. A succession of warm and languorous days had drifted by, one after another, while we lounged in idle contentment. We’d done nothing of any use, really, except watch the summer go rolling slowly past. We were a handful of tents scattered far and wide across the immensity of the field. All around us was spaciousness, peace and tranquility.

Now, suddenly, everything was different. We’d been roused from our indolence by the newcomers with their orderly regime, their functional tents and their tireless trumpet blasts.

From THE FIELD OF THE CLOTH OF GOLD. Used with permission of Bloomsbury Publishing. Copyright © 2016 by Magnus Mills.

Why Do Writers Love Birding So Much? 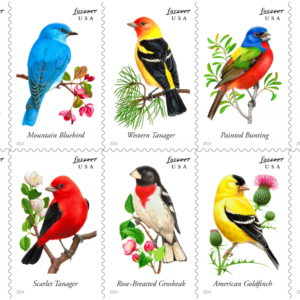 Why Do Writers Love Birding So Much? My husband and I spend much of our free time in remote places, walking the trails and fields and dirt roads looking for birds....
© LitHub
Back to top