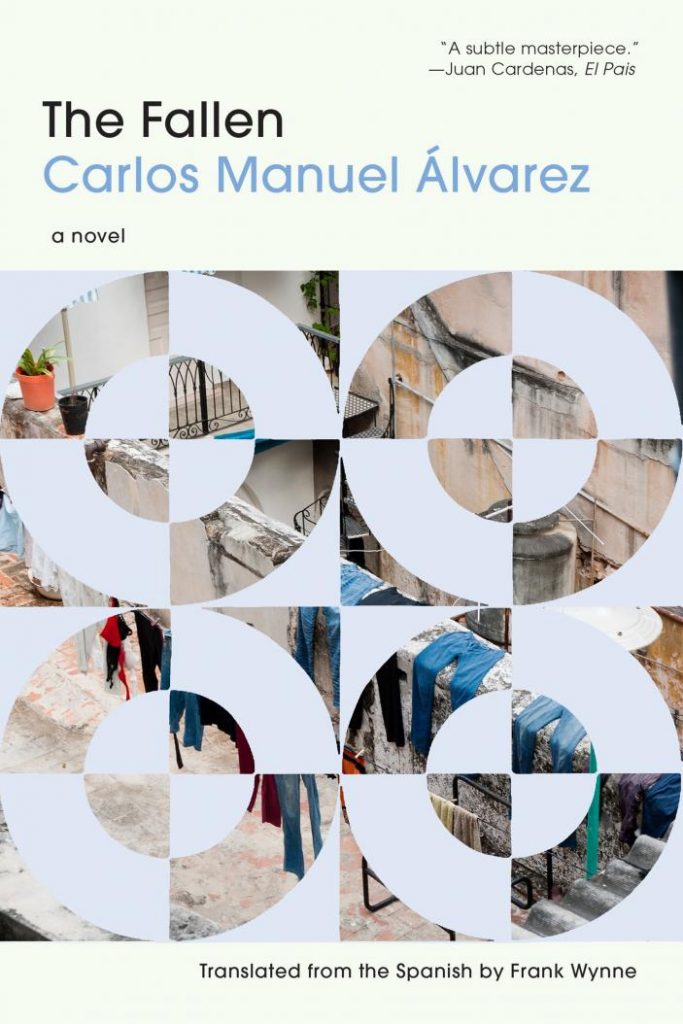 The following is excerpted from The Fallen, a novel by Carlos Manuel Álvarez and newly translated by Frank Wynne. Álvarez has contributed to the New York Times, El País, BBC World, and the Washington Post. In 2017 he was included in the Bogotá39 list of the best 39 Latin American writers under 40. He divides his time between Havana and Mexico City.

The car is out of gas again. A ’95 Nissan, fairly new. I would have preferred a Lada, a Fiat, something cheap. That would have suited me. With a Lada, you can use spare parts from other models, it goes where you need it to go, and it would not have broken down on me the way the Nissan is doing. I am not complaining—I get by. It broke down for the umpteenth time and I left it there, halfway down the road, on the curb. I was sticking my hand out for half an hour before a bus picked me up. This has been happening a lot these past weeks, but I make do with the fuel I am allocated. There must be a leak in the gas tank. At the maintenance department they said no, it’s running perfectly. They could be pulling a fast one, I’m not ruling it out. Nobody likes their boss. I do not either, to tell the truth. But the difference is that my bosses are corrupt and I am an honest and irreproachable boss, like Che Guevara, who once visited a bicycle factory where the lickspittle manager tried to give him a bicycle for his daughter and Che put him in his place, saying that these bicycles weren’t his, meaning the manager’s, that they belonged to the State and he had no right to give them away.

These days people take what they are given, and sometimes what they’re not given too. Sometimes I cannot help but think—not that I would say it, obviously—that the heroes of the Revolution had it easier than I do. People say times were hard back then, but the hardest times are those when no one wants to do anything, times marked by a crisis of values, a spiritual simple-mindedness, too little determination. The mechanics in the repair shop don’t want to work. They spend their days sitting in the cars, smoking, telling stories or talking about everything and nothing, stuffed into their oil-stained overalls, pestering the women who walk down the street behind the hotel. The drivers and the grease monkeys and the auto-body mechanics. They need a firm hand, the lot of them.

They look at me submissively, but you can feel the resentment oozing from every pore. You can see it when one of them heads out to tow my Nissan back to the hotel. It is not even nine o’clock and already they’re pissed off. Sometimes this country is too kind to its people. It gives them so much in exchange for so little.

I go up to my office. On the way, a couple of workers greet me. My secretary tells me there is a pile of documents requiring my signature on the desk. She asks after Mariana, I tell her she is better, then she goes into the office kitchen to get me some coffee. My office is little more than spartan. A ceiling fan, a desk, a sofa, three chairs for meetings, a telephone, a desktop computer, photographs of my children, a glass pyramid paperweight, and a piece of wood in the form of a scroll carved with a quote from Ho Chi Minh. First to cross the river, last to arrive at the feast, it reads.

Sometimes I cannot help but think—not that I would say it, obviously—that the heroes of the Revolution had it easier than I do.

The secretary brings the coffee. I sip it slowly; it is a little bitter for my taste. I sign the pile of documents, all but one, sent to me by a Party official. I tell my secretary to arrange a meeting with him. For what time, she asks. One o’clock, I say, after lunch. My secretary is not young, she is not pretty, she is not discreet. She is an elderly woman in her sixties who has been working as secretary in hotels or in the tourism sector for two-thirds of her life, long before there was a tourist industry as such.

I make my daily round of the facilities: the laundry, the kitchens, the specialist restaurants, the beach bungalows. It is high season. By the swimming pool, I am forced to intervene when two Russians, having downed a bottle of vodka apiece, have come to blows and it is not even noon.

I eat lunch in the staff canteen. María comes over and asks if she can have a minute. She is the floor manager of the Cuban restaurant. María never beats around the bush. I like that about her. I realize we are living in an era where things are said with three times more resources, words, and complications than necessary. It is almost impossible to work out what people are trying to say. María wants to talk to me about René. There is nothing to say, I tell her. She asks me to give him another chance. I tell her that I appreciate her work, that she is my daughter and I love and respect her, but could she please leave me in peace.

No one else in the canteen talks to me. I arrive back at my office for the meeting with the Party official to find him sitting in the waiting room, reading the newspaper. I invite him in, open the door, and usher him in ahead of me. The man despises me. A year ago, he ordered the hotel pastry chef to make a three-tier cake for his daughter’s fifteenth birthday, and I canceled the order. I told him the story of Che Guevara and the bicycle. I am not entirely sure he got the point.

The afternoon drifts away, a Benadryl tablet the size of the sun. I feel drowsy, but I don’t want to nap. I am reluctant to stir up the troubling images that, for some time now, have been coming to me in dreams. Insomnia is a clear symptom of wanting to be in control of one’s life. My secretary asks permission to attend the parent-teacher meeting of her grandson, who has just started primary school, and I let her. After that, between making phone calls and reading the annual budgets, I get the day back on track. Before going home at about six o’clock, I stand for a while next to the swimming pool, gripping my briefcase tightly. I feel the roiling chlorinated water, water flowing into water. I bend down, plunge my fingers in, press them against the return outlet, feel it suck. When I stand up again, I am already in the parking lot, in the Nissan, my briefcase on the passenger seat, and, without saying goodbye to anyone, I drive off.

Mariana has had another fall. María is already home. She leaves work before I do so she can catch the staff minibus. She picked her mother up from where she was lying on the living room floor, between one of the armchairs and the television, clutching the remote control. She has bumped her collarbone again, and split her chin. Right now, she is sleeping. I make dinner. I do not say as much, but I have no idea what I am going to do, what we are going to do about this. María goes to her room.

After a moment, I sense a shadow approaching. Almost reluctantly, she steps into the kitchen. She always wakes at around this time. She kisses the corner of my mouth. She is wearing a frayed housecoat. She is tall, her skin is very pale, her eyes are round but, despite everything, still luminous. All those bruises on her skin. I still think of her as beautiful. She says I don’t; I say I do. She says I don’t, I silently think I do, but I don’t contradict her, because who does a man do his best to please, if not his wife?

How was my day, she asks. I tell her that the Nissan ran out of gas again. She asks why I haven’t found a solution to the problem yet. I tell her I don’t know what else I can do. I have had it checked over. I checked it over myself—not that I know much about cars—and couldn’t find any problems. She says that if she was in better shape, she would check it out and she would find the problem. That’s true, I say, and it is. Mariana was always able to solve problems; she was very outgoing. It is good to have a wife who complements you.

I set the table, I call María. We all sit down. We do not always eat this well, but today we do. It’s like I always say: you can measure the progress of a country by an honest man’s dinner table. A man who does not put more food on the table than is his due. And whenever I worry that things are getting worse, I think about my dinner table, how it is today, and how it was a decade ago, and I realize things are not getting worse, they are getting better, they truly are.

I feel a twinge in my stomach, but I remain calm—then again, I am always calm. The voice on the telephone is shrill and mock- ing. I’m tired of trying to get to the bottom of it. We should call the police, I say. No, not the police, Mariana says. María says nothing. I don’t know how to change the subject, so I tell the story about the Party official. Mariana smooths her hair, what little she has left, and scolds me.

Afterward, we sit around the television and watch the news. We pay attention for a while, it is a tradition. We watch a soap opera in which the bad guys are heading for a fall. Then we go to bed. I tuck Mariana in. We quickly manage to doze off, but at some point in the night we are woken by the telephone. One ring, two. Mariana looks at me. Three rings, four. What if it’s Diego, she says. What if something’s wrong, she says. Nothing. We do nothing. She wants to answer, but I stop her. Nobody knows what a telephone says when no one answers.

“The Father” from The Fallen. Copyright © 2018 by Carlos Manuel Álvarez. English translation copyright © 2019 by Frank Wynne. Reprinted with the permission of Graywolf Press, Minneapolis, Minnesota.

A Brief History of the Policing
of Black Music 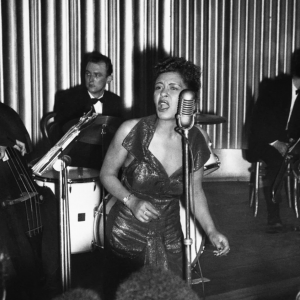 A Brief History of the Policing
of Black Music Billie Holiday died handcuffed to her hospital bed because her drug addiction had been criminalized. A Black FBI informant...
© LitHub
Back to top