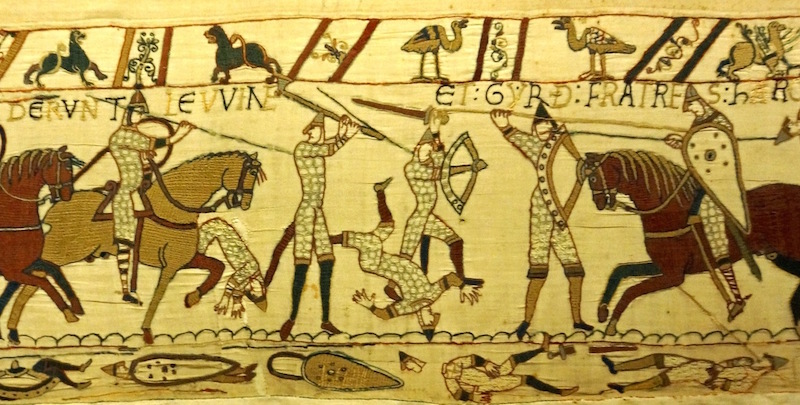 The ‘Dark Ages’ Weren’t As Dark
As We Thought

History Flickers In and Out of Darkness, No Matter the Era

There can be few more damning or more useless terms than “the Dark Ages.” They sound fun in an orcs‐and‐elves sort of way and suggest a very low benchmark from which we have since, as a race, raised ourselves up into the light—with the present day using as its soundtrack the last movement of Beethoven’s Ninth. But the damage the term does is immense. A simple little mental test is just to quickly imagine a European scene from that era. Now: was the sun shining? Of course not. The default way of thinking about the long, complex era that lasted from the final decades of the Roman Empire to somewhere around the Battle of Hastings is to assume it all looked like the cover of a heavy metal album.

One problem is that the older the period the more chances there are for its material production to be destroyed. Across Lotharingia [ed. note: one of three filial kingdoms born of the Carolingian Empire]  there has been century after century of rebuilding (with the re‐use of every available piece of old dressed stone) with most evidence of earlier churches and palaces removed in the process. In practical terms one cannot imagine that the vast, humorless bulk of Cologne Cathedral is merely the latest in a series stretching back to a Roman temple. Many of the great religious buildings of the Rhine have a display table showing somewhat conjectural models of their ancient predecessors, usually starting with a patronizing little wooden block, looking something like a skew‐whiff Wendy-house.

So great is the weight of “the Dark Ages” on our shoulders that it is almost impossible not to think of the makers of this wonky church slithering about on the mud floor cursing the way the roof was leaking and how nobody could design a door that shut properly, resigned to the occasional fiasco when the walls would simply fall in on the gurning, fur‐clad, battle‐axe‐wielding communicants. In practice, these now non‐existent buildings would have been extremely beautiful—drawing on Roman and Byzantine models, and stuffed with all kinds of wonderful stuff from the Roman Empire which now no longer exists.

This is the related problem suffered by “the Dark Ages”—our towns often occupy exactly the same sites as they did then (the same river crossing, the same harbor) and are built on top of them, but there have been simply innumerable points at which older material has been destroyed. There is probably some rough mathematical calculation about how each passing century lowers your chance of anything much surviving at all. The famous fat boy of 1666—who was meant to be watching the baker’s oven, but instead gorged on pies, fell asleep and as a result burned down London—is only one of an elite group who caused mayhem through their momentary inattention over the centuries.

With every household routinely handling flames in wooden surroundings it is unsurprising that so many towns would often find themselves having to start again from scratch. We know far more about more recent horrors—for example, the gunpowder accident that destroyed much of Delft in 1654—but any 24‐hour period over the centuries was always fraught with some fumble‐fingered disaster somewhere.

The true “dark age,” of course, was the early 1940s when, simply as a side effect of industrial killing, great swathes of the past disappeared.

The unrelenting impact of warfare has of course done far more damage, wrecking town after town. Any breakdown in order or lunge for supremacy ends up with further pyres of the material past. Simply looking at recent disasters, many thousands of ancient records, treasures, histories, valued for centuries by custodians, were destroyed in the 1870 Siege of Strasbourg and the 1914 destruction of much of the Catholic University of Leuven.

The true “dark age,” of course, was the early 1940s when, simply as a side effect of industrial killing, great swathes of the past disappeared. One small yet major example—the extraordinary series of paintings of the visions of Hildegard of Bingen, made in the 1170s either by the saint herself or under her supervision, disappeared in the general catastrophe that unfolded in Dresden in early 1945. We only know what they looked like (except from black‐and‐white photos) through accurate and beautiful copies painted by a group of nuns, by sheer chance, in the 1930s. So these frail little works of disturbing genius survived nearly eight centuries before succumbing, and exist today only through the most ancient form of devotional copying.

This is an over‐elaborate way of saying that in as much as the era after the Roman Empire is “dark” it is because it has been overlaid by many centuries of further things happening—and I have talked only about human agency rather than the terrors of mold, mice, lightning and damp. Our own “library” at home suffered catastrophic loss from a house‐rabbit called Dusty who in his short life ate the spines of innumerable books. My copy of Hermann Hesse’s Narcissus and Goldmund is cherished, partly because I have owned it for so long, but also because of its memorial teeth marks.

When was the very last beautiful Roman fabric so sun‐rotted that it was chucked away? And that is as nothing compared to the almost totally successful attempts during the early Christian centuries in Europe to erase all trace of native paganism. This last issue is often overlooked. At the back of our minds when thinking about the centuries when the Roman Empire mutated into medieval Europe we are unconsciously taking on the spurious guise of specific communities. We are happy to read about Charlemagne destroying the Avar Empire and taking all its gold because at some level we emotionally sneak ourselves into Charlemagne’s baggage‐train. But the Avars ruled Central Europe for over two centuries, and it is not a given that their civilization had no worth and did not represent a future we would have flourished in.

Or earlier, there are the Alemanni in what is now south‐west Germany and Alsace (and after whom the French call Germany Allemagne) who were broken by the Frankish ruler Clovis. Of course, we are the heirs of Christianity, but only in a passive, non‐contributive way—to see ourselves on one specific side in these ancient contests is awkward. I might hiss at the antics of the Saxons and Vikings, but as someone part English and part Irish I am much more likely to have their genes than Frankish ones.

These issues become vivid in the town of Tournai—for centuries a French‐ruled enclave squeezed between the County of Flanders and the County of Hainaut and now part of Belgium, a classic crossroads through which every army has marched, from the legionaries of the Roman Empire to Allied troops in 1944. I may as well say here that Tournai is a fantastic historical palimpsest and somewhere that always puts a spring in my step. I once found myself changing trains there late at night and realizing that I had just enough time to haul my bag up the road through the freezing dark to look in renewed wonder at the vast, somber drum—like a stonebuilt gasometer—of the Henry VIII Tower.

In this current context, however, what makes Tournai so remarkable is the discovery during routine repairs to the Hospice of St Brice in the 1650s of the tomb of Childeric I. This accidental find catapulted everything back some 250 years before Charlemagne, to the century after the Western Roman Empire had collapsed, a world which must have still been densely Roman in its appearance, probably with much smaller populations in towns and more limited trade. Childeric’s son, Clovis I, was baptized, united the Frankish tribes and founded the Merovingian dynasty which lasted until Charlemagne’s dad put the last of them into a monastery.

It was downhill for the hoard from then on.

The management of Childeric’s tomb has not exactly been a curatorial model. It started well as by sheer good luck Tournai was then part of the Spanish Netherlands under the benign and intelligent leadership of Archduke Leopold Wilhelm, who as part of his vast expenditure on art objects commissioned a superb book on the tomb from Jean‐Jacques Chifflet, an antiquarian from the Spanish‐ruled Franche‐Comté. This has immaculate pictures of the heaps of extraordinary stuff Childeric was buried with—gold objects of great variety and beauty from a bull’s head to coins, buckles, a crystal globe, seal‐rings and intricate pieces of cloisonné. It was downhill for the hoard from then on. Leopold Wilhelm took everything back to Vienna when he retired and left it to his nephew the Emperor Leopold I. He gave it to Louis XIV as a present but, in one of the many instances where Louis is so disappointing, he took no interest in the gifts and simply stored them.

They survived the Revolution but were stolen in 1831 and dispersed or melted down. The hoard’s great aesthetic intervention came from its including dozens of small gold bees (or possibly cicadas), which must have decorated some object which had since rotted away, perhaps a cloak. In his search for an appropriate new symbol for his dynasty (the ancient fleur‐de‐lys being patently unacceptable to a new era) Napoleon decided to make these bees the imperial motif, scattering them on everything from coats of arms to Josephine’s slippers. They cluster all over the decorations of the French Empire and it is one of the sadder aspects of Napoleon’s defeat and exile that they disappear from the decorative arts until their rather wan revival under his nephew Napoleon III.

What remains in Tournai now however (aside from some reproduction bees) is a too‐good‐to‐be true archaeological museum which lays out everything we can still know about the huge scale of Childeric’s tomb and several associated burials. As his son Clovis turned Christian this was the last of the fabulous, full‐blown pagan Frankish affairs, with 21 cavalry horses buried nearby in an associated mound and what was clearly a sprawling sacred space with Childeric’s body at its center. An aristocratic woman buried nearby slightly later had objects such as scissors, amber and a wine‐strainer which linked her to trade across Europe.

Indeed, the more time spent looking at these shield‐bosses, necklaces and pins (and not least a debonair and alarming scramasax—a wonderful word for a long knife), the more clear it becomes that this was a highly sophisticated, confident civilization—which just happened to exist a very long time ago and whose achievements were about to be completely disregarded by the new Christian regime of Clovis, who moved his capital from Tournai to Paris. The process by which Childeric’s tomb became forgotten cannot be pieced together as his dynastic significance lasted so long. Somehow, the King of the Salian Franks and his favorite horses, his crystal globe, bees, scramasax and all sank into oblivion, eventually disappearing completely under church buildings, until being summoned back to the surface nearly twelve hundred years later. 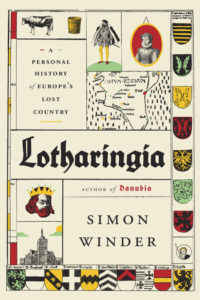 Excerpted from Lotharingia: A Personal History of Europe’s Lost Country by Simon Winder. Published by Farrar, Straus and Giroux on April 23, 2019. Copyright © 2019 by Simon Winder. All rights reserved.

Simon Winder is the author of Germania, Danubia, and The Man Who Saved Britain. He works in publishing and lives in Wandsworth Town, London. 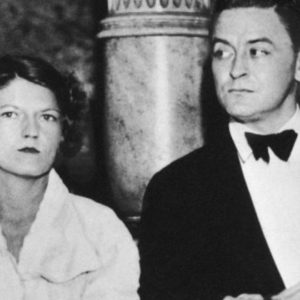 I first read Tender Is the Night as a girl of roughly the same age as Rosemary Hoyt, the young actress in the novel—in...
© LitHub
Back to top
Loading Comments...