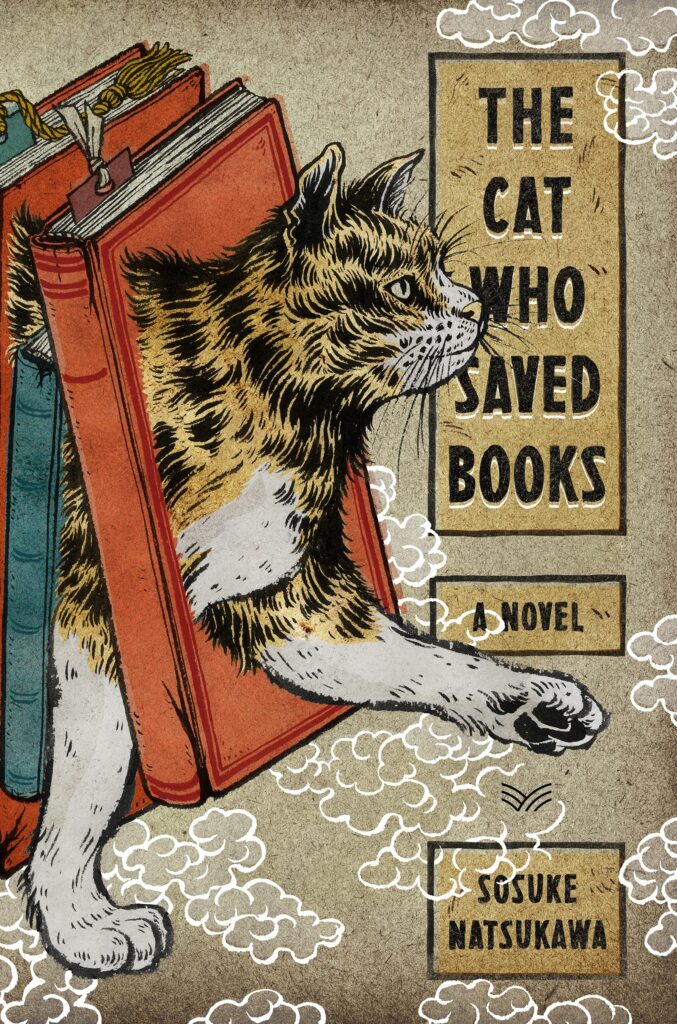 The following is excerpted from The Cat Who Saved Books, a novel of books, first love, fantasy, and an unusual friendship with a talking cat. Natsukawa is a doctor in Nagano, Japan. His first book Kamisama No Karute (God’s Medical Records) won the Shogakukan Fiction Prize and received 2nd Place at the Japan Bookseller Awards. It sold over 1.5 million copies and was adapted into a film in Japan.

Rintaro’s grandfather had always been a mysterious character.

He seemed to inhabit a slightly different reality than the one Rintaro knew. A man of few words, elusive, but not standoffish or cold. He came across as a quiet, wise old man.

He would get up at 6:00 a.m. and finish breakfast by half past. By 7:00 a.m. he would have prepared bento lunch boxes for both Rintaro and himself. Then he’d open the doors and windows to air out the shop and water the outside plants. From morning time when he saw his grandson off to school, to the early evening when Rintaro returned, he never surfaced from his ocean of secondhand books. His daily routine was regular, unchanging, like a river flowing steadily to the sea.

You would imagine this little old man had lived his whole life in that bookshop, but that couldn’t have been further from the truth.

Rintaro’s grandfather didn’t talk about it much, but he had once held a rather important post at a university somewhere. Rintaro heard from one of the elderly customers that he’d suffered some kind of a breakdown. The man who confided this to him was a silver-bearded gentleman who always turned up at the shop dressed in a suit with a bolo tie. He’d drop by from time to time to purchase some thick work of literature, or occasionally foreign language books. He told Rintaro that he used to be a colleague of his grandfather’s.

“Your grandpa is a wonderful human being,” he once told Rintaro, reaching down and ruffling the boy’s hair.

That must have been when Rintaro was still in junior high school. Grandpa had been out on an errand, leaving his grandson in charge of the shop.

“He took some of the world’s most troubling problems and did everything he could to try to find a solution. He made the greatest of efforts, dedicated his whole mind to them. He did seriously brilliant work.”

The silver-haired man absentmindedly stroked the exquisite, cross-shaped design on the cover of a book as he reminisced.

The man broke off. He sighed as he scanned the bookshelves in front of him.

“It wasn’t enough. He retired from the world stage before accomplishing his goal.”

World stage? Rintaro didn’t associate that kind of phrase with his grandfather at all.

“What was my grandpa trying to accomplish?” Rintaro asked. The old man smiled.

“Nothing exceptional. He just tried to remind people of the obvious. Not to tell lies. Never bully someone weaker than themselves. To help out those in need . . .”

“Because the obvious is no longer obvious in today’s world.”

He gave a deeper sigh, then continued.

“In today’s world, a lot of what should be obvious has been turned upside down. The weak are used as stepping-stones and those in need are taken advantage of. People just get caught up in this pattern. Nobody stands up and calls for it to stop.”

“But my grandfather did?” Rintaro asked.

“Yes. He said stop. He said it was wrong. He patiently kept trying to persuade people.”

The old man continued to tell the boy how, despite his grandfather’s efforts, nothing ever changed.

As if he were handling an elegant glass carving, he gently placed two heavy volumes onto the cash desk. They were James Boswell’s Life of Samuel Johnson.

“Do you have the third volume, too?”

“We do. Up there to the left. Second shelf from the top. Probably next to the Voltaire.”

The old man nodded and smiled. He went to the shelf and brought back the volume he’d been looking for.

“Are you saying that something happened to Grandpa’s job at the university, so he ended up opening this bookshop instead?”

“Yes, I suppose that’s the gist of it. But it wasn’t quite like that.”

Rintaro stared blankly at the man.

“Your grandfather didn’t just give up or run away without putting up a fight.” He laughed. “He simply changed his approach.”

“Your grandfather opened a wonderful secondhand bookshop. And by doing that he was able to get all kinds of amazing books into the hands of many people. He believed that way he might be able to begin to right some wrongs, straighten out some of the things that had gotten twisted. What I mean is, this was the path that he chose. Not exactly the most glorious of routes, but a gutsy choice—typical of your grandfather.”

The old man paused from his earnest retelling and gave the boy a smile.

“Is this all a bit difficult for you to follow?”

It is, Rintaro thought.

Right at that moment, he couldn’t grasp all the details, but it was as if he were seeing things a little differently. If you asked him what had changed, he wouldn’t be able to explain. But somehow in the last few days, as he’d gotten into the regular rhythm of cleaning and maintaining, he’d gradually begun to understand the connection between his taciturn grandfather and this little shop, Natsuki Books.

Dusting the bookshelves and sweeping the front step was monotonous, repetitive work, and it took a surprising amount of time and effort. But it had helped him to understand how patient his grandfather had always been and how much care the old man had always taken.

Rintaro looked around the shop with affection. He was feeling a bit sentimental.

He’d spent an hour this morning cleaning and arranging the shop. Now strips of winter sunlight filtered through the slats of the lattice door and reflected off the wooden floorboards. The cheerful conversation he could hear outside was doubtless groups of high school students on their way to morning club activities. Their laughter was carried on the cold winter air. It really was the pleasantest of breezes.

“Slacking off again, Mr. Proprietor? What happened to school?”

It came out of nowhere, but this time Rintaro wasn’t fazed by the familiar voice. He rested the handle of his duster on his shoulder and turned to look.

The furry tabby cat was sitting at the far end of the narrow aisle. The back wall had vanished once again and had been replaced by rows of bookshelves stretching on forever into the bluish light. 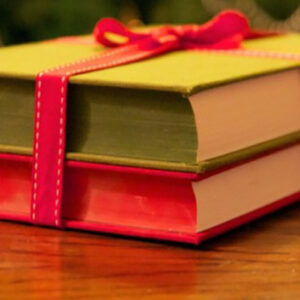