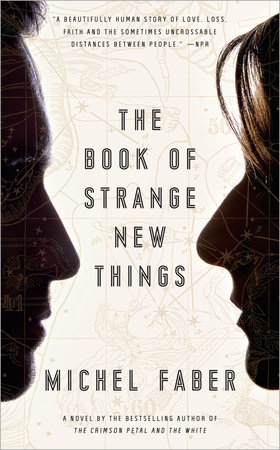 The following is from Michel Faber’s The Book of Strange New Things. Faber has written seven other books and has won several short-story awards, including the Neil Gunn, Ian St James and Macallan. Born in Holland, brought up in Australia, he lives in the Scottish Highlands.

Peter stepped through the sliding door into the air of Oasis and, contrary to an irrational apprehension, he did not instantly die, get sucked into an airless vortex, or shrivel up like a scrap of fat on a griddle. Instead, he was enveloped in a moist, warm breeze, a swirling balm that felt like steam except that it didn’t make his throat catch. He strolled into the dark, his way unlit except by several distant lamps. In the dreary environs of the USIC airport, there was nothing much to see anyway, just acres of wet black bitumen, but he’d wanted to walk outside, and so here he was, walking, outside.

The sky was dark, dark aquamarine. Aquamareeeeeen, as BG might say. There were only a few dozen stars visible, far fewer than he was used to, but each one shone brightly, without any flicker, and with a pale green aura. There was no moon.

The rain had stopped now, but the atmosphere still seemed substantially composed of water. If he closed his eyes, he could almost imagine he’d waded into a warm swimming pool. The air lapped against his cheeks, tickled his ears, flowed over his lips and hands. It penetrated his clothing, breathing into the collar of his shirt and down his backbone, making his shoulderblades and chest dewy, making his shirtcuffs adhere to his wrists. The warmth – it was extreme warmth rather than heat – caused his skin to prickle with sweat, making him intimately aware of his armpit hair, the clefts of his groin, the shape of his toes inside their humid footwear.

He was dressed all wrong. Those USIC guys with their loose Arabic duds had it sussed, didn’t they? He would have to emulate them as soon as possible.

As he walked, he tried to sort out which unusual phenomena were occurring inside of him and which were external realities. His heart was beating a little faster than usual; he put that down to excitement. His gait was a little wonky, as though skewed by alcohol; he wondered if he was merely suffering the after-effects of The Jump, jet lag, and general exhaustion. His feet seemed to bounce slightly with every step, as though the bitumen was rubberised. He knelt for a moment and rapped on the ground with his knuckles. It was hard, unyielding. Whatever it was made of – presumably some combination of the local earth and imported chemicals – it had an asphalt-like consistency. He stood up, and the action of standing seemed to him easier than it should be. An ever-so-slight trampoline effect. But this was counterbalanced by the watery density of the air. He lifted his hand, pushed his palm forward into space, testing for resistance. There was none, and yet the air swirled around his wrist and up his forearm, tickling him. He didn’t know whether he liked it, or found it creepy. Atmosphere, in his experience, had always been an absence. The air here was a presence, a presence so palpable that he was tempted to believe he could let himself fall and the air would simply catch him like a pillow. It wouldn’t, of course. But as it nuzzled against his skin, it almost seemed to promise that it would.

He took a deep breath, concentrating on the texture of it as it went in. It felt and tasted no different from normal air. He knew from the USIC brochures that the composition was much the same mix of nitrogen and oxygen he’d been breathing all his life, with a bit less carbon dioxide and a bit more ozone and a few trace elements he might not have had before. The brochures hadn’t mentioned the water vapour, although Oasis’s climate had been described as “tropical”, so maybe that covered it.

Something tickled his left ear and, as a reflex, he brushed at it. A fragment of semi-solid matter, like a wet cornflake or a rotting leaf, passed across his fingers but fell off before he could hold it up to his eyes and examine it. His fingers were streaked with a sticky fluid. Blood? No, not blood. Or if it was, it wasn’t his. It was green as spinach.

He turned around and looked at the building he’d emerged from. It was monumentally ugly, like all architecture not built by religious devotees or mad eccentrics. Its only redeeming feature was the transparency of the mess hall’s window, lit up like a video screen in the dark. Although he had walked quite a long way, he could still recognise the coffee bar and the magazine rack, and even fancied he could make out the Asian man still slumped on one of the chairs. At this distance, these details looked like a neat assortment of items stored inside a coin-operated dispenser. A luminous little box, surrounded by a great sea of strange air; and above it, a trillion miles of darkness.

To be honest, he’d experienced moments like this before, on the planet that was supposed to be his home. Sleepless and wandering the streets of shabby British towns at two, three in the morning, he would find himself at a bus shelter in Stockport, a woebegone shopping mall in Reading, or the empty husks of Camden market in the hours before dawn – and it was at those times, in those places, that he was struck by a vision of human insignificance in all its unbearable pathos. People and their dwellings were such a thin dust on the surface of the globe, like invisible specks of bacteria on an orange, and the feeble lights of kebab shops and supermarkets failed utterly to register on the infinities of space above. If it weren’t for God, the almighty vacuum would be too crushing to endure, but once God was with you, it was a different story.

Peter turned again and kept walking. His vague hope was that if he walked far enough, the featureless tarmac of the airport environs would finally come to an end, and he would step over into the landscape of Oasis, the real Oasis.

From THE BOOK OF STRANGE NEW THINGS. Used with permission of Crown Publishing, a division of Penguin Random House. Copyright © 2014 by Michel Faber. 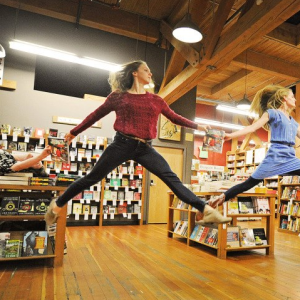