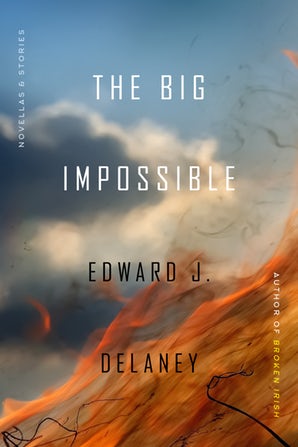 The following is excerpted from Edward J. Delaney's The Big Impossible. Delaney is an author, journalist, and filmmaker. Among his books are novels Follow the Sun and Warp & Weft, and the short story collection The Drowning and Other Stories. He has been published in The Atlantic and Best American Short Stories and he has received the PEN/New England Award, the O. Henry Prize, and a National Endowment for the Arts Fellowship. He teaches at Roger Williams University.

This motel was at the edge of Garden City, Kansas. It had two wing-like rows of rooms with the red doors facing a weed-grown blacktop apron. At the center was an A-frame lobby so that the whole thing had the cumbersome feel of a transport plane trying to will itself from a dusty airstrip. In the front of the lobby, across the parking lot, was a chain-link-fenced rectangle within which there was a small swimming pool. It fronted the place as if on display, and the part of the fence facing the road was slatted with green plastic strips. It was a place the last of my money could take me, for a night. A late-October Friday, Indian summer, warm. Kansas was not at as high an altitude as Colorado, and the air held its heat better.

I didn’t have a swimsuit. I hadn’t had short pants since I was a boy. My duffel held only necessary work clothes and personal effects. I stripped off my shirt and boots and socks and went to the pool in my filthy jeans. No one was within the fence and I only had the idea of letting my skin warm to a dusty breeze that had kicked up from the western horizon.

I had my eyes closed and didn’t realize I was asleep until the sliding door of a van slammed shut and made me start. It emptied itself of a woman about my age and a half-dozen preteen girls who seemed to lumber toward the lobby door in a way that suggested a long and tiring ride. The woman looked at me a little warily. Whether it was my right to be there or not, I knew those girls were going to want to swim, and not with someone as shaky-looking as me around. I pulled myself from my chaise and went back to my room.

“Living like you’re comfortable with what life deals you, that’s the big impossible sometimes.”

Television seemed like an odd indulgence. The black-and-white sat on a rickety cart next to the dresser. A man read the news and told me things I hadn’t an inkling of. The smell of Garden City, the stockyards and packing plant, was strong but seemed pure in its earthy funk. I was hungry but was biding my time to make the whole night meal one to sustain me for a while. I could hear the little girls out in the water now, squealing and plunging, and when it was quiet I pulled a room chair out in front of my door to feel the cooling air of those high plains.

In the parking space that went with the room next to mine, a big Cadillac, new-looking, was nosed up at the walk like a moored ship. The car had California plates; it was powder blue with white leather seats. The trunk was still open, as was the door to the room, and after a while the man came out to get the rest of his things.

He was tiny. He was maybe a little more than three feet tall. I guessed him to be in his sixties and he turned and saw me standing there. In a reedy voice, he said, “Give an old fellow a hand?”

I got up and went around to the trunk and took out his bag, which was leather and expensive-looking. He had thick glasses and the eyes seemed a mile under them and his face was all lines. I brought the suitcase in and laid it at the foot of his bed; he slipped his hand in his pocket for just an instant, and then he said, “Say, let me offer you a drink. I’ll join you outside.”

He had already brought in a smaller leather case, and he opened it to reveal a red-velvet-lined compartment that held a bottle of Chivas, a metal jigger, and four glasses secured by small leather straps. He set up on top of the dresser, and sent me for ice. When I came back and he had trickled the Scotch over the ice, we went outside, him carrying the drinks with his palms underneath, me carrying his chair out to put next to mine.

“Where are you headed?” I asked.

“Looking for work,” I said. “Indulging myself for one night.” He, with his car and his leather luggage and his Scotch, was clearly slumming, in a dingy motel he hadn’t wanted, but he nodded and said nothing.

After a while, he said, “Call me Frank.”

A blue Air Force station wagon with a serial number stenciled on the driver’s side door rolled into the lot. Four young men got out, in jumpsuits and colorful ascots. They were clean-cut and joking, relaxed with benign smiles. Frank and I watched them take out their bags and go to the office.

“Jet pilots, they must be,” Frank said.

We sat and finished our drinks and he fixed us a couple more. After a while the woman and the little girls came out to the van, their hair still slick from the pool. The woman, having forgotten something, fumbled with her keys and went back in the room. One by one, the girls saw the little man and one of them said something nasty and the others tried, not overly hard, to suppress their giggles.

“A lifetime of that,” Frank said, clearly to put me at ease. “Living like you’re comfortable with what life deals you, that’s the big impossible sometimes.”

For a few moments I thought about robbing Frank.

The little girls couldn’t stop staring. Another remark, and another louder round of squeals. The woman came out, got in the van, and they drove off.

“What business are you in?” I said.

“No,” he said. I could tell he didn’t especially care to get into it. “Every once in a while, my services are in demand. It’s a way of making a little money quickly and easily. Then I can go home.”

“You drove all that way?”

“I drive everywhere. I won’t fly. Can’t stand the thought.”

Two of the Air Force men came out of the rooms in swim trunks with towels over their shoulders. They had shower sandals on and they were heading for the pool. Frank sat tilting his drink back and forth, watching. “But I always wanted to learn to fly,” he said.

He was lost in himself for a second, then he turned to me. “I notice you have no vehicle. What is it that you do?”

“I work,” I said. “I have to get to places where the jobs are. I just finished on a farm out east of here. I’m walking into town tomorrow to get a bus.”

The fliers seemed to swim without enjoyment. Each of them went in, floated and then put his head under, then came up and toweled off. They snapped their metal watches back on their wrists and came back across the parking lot.

“So you boys are pilots,” Frank called out. The two looked at each other then veered toward us.

“We’re with SAC, sir,” one of them said softly.

“What kinds of planes do you fly?” Frank said.

Frank looked at me.

“They mind the missiles,” I said. I had been on those farms where the silos lay flat and fenced like tombs, to be worked around, both on combines and in conversation. These men went down holes where they waited for orders that weren’t ever supposed to come.

One of the men gave off the snort of a laugh. “We mind them, yes, sir.”

They walked off toward their room. Frank watched.

“They sit underground,” I said. “If somebody sends the right code, they push the buttons.”

“From their uniforms you’d think they were fliers,” Frank said.

For a few moments I thought about robbing Frank. In my situation at that time, the thought was almost inevitable whenever I met someone new: the car, gassed up with the keys nearby; his wallet inevitably fat; me, both visible and invisible, the name on the register not mine, and the room paid in cash. But I thought about him without his car. Flying out of that little Garden City airport, strapped into an eggbeater. Frank was my friend.

Why We Feel So Compelled to Make Maps of Fictional Worlds 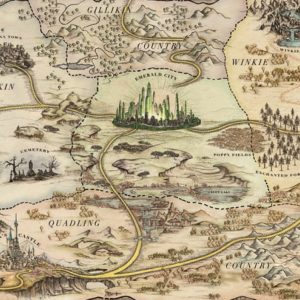 Why We Feel So Compelled to Make Maps of Fictional Worlds In 1665, a German Jesuit and polymath named Athanasius Kircher published an eclectic scientific treatise called Mundus Subterraneus....
© LitHub
Back to top