The Best Kind of People 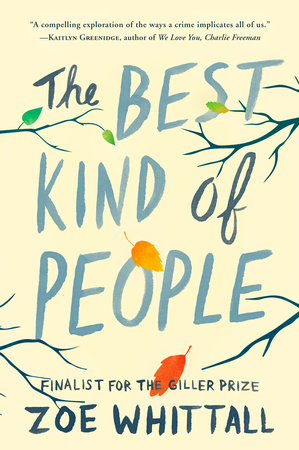 The following is from Zoe Whittall’s novel, The Best Kind of People. With exquisite emotional precision, award-winning author Zoe Whittall explores issues of loyalty, truth, and the meaning of happiness through the lens of an all-American family on the brink of collapse. Her debut novel Bottle Rocket Hearts (2007) made the Globe and Mail Top 100 Books of the Year. Her second novel Holding Still for as Long as Possible (2009) won a Lambda Literary Award.

Joan was drying the last dinner plate, about to go wrap Sadie’s birthday presents, but her husband George took the dishtowel from her hand and replaced it with a glass of red wine. She took a sip, turned back to the expansive bay window, trying to make sure Jimmy and Sadie were not in any trouble. She hated when they swam at night. She would get flashbacks of a teenaged girl she’d worked on at the hospital who had drowned and come back to life but remained essentially brain-dead. The image would be of the girl’s cold arm hanging off the gurney as she was wheeled down the hall at the trauma center.

George kissed her cheek. “Come sit down, the kids are fine. Remember those nine hundred years of swimming lessons? Those ceremonies with the badges?”

“Maybe I should go check on them anyway,” she said. George gave her an affectionate squeeze. “The water is so calm right now. They’re okay.”

She joined him at the table, placing an open Tupperware of lemon squares between them. She looked at the wine, tilted her glass in his direction in a gesture of what’s up?

Marriage is so much about embedded routines. That night they’d had grilled salmon and rice noodles, sautéed greens. The same as every Sunday night. Usually George was watching the news by now, head leaned back and mouth agape with a slow, murmuring snore. Joan glanced towards the window again, unable to stop herself from getting up and leaning over the sink on her tiptoes, pressing her forehead against the glass. All she was able to see in the moonlight was a dark blur of water beyond the edge of the hill, and the tip of the long wooden dock. George made a whirring sound and a helicopter motion with his hand, gently mocking her overprotective nature.

Joan surrendered with a laugh and sat back down. George raised his glass in a cheers, and pulled at the side of his lips before speaking. “Honey, for weeks I’ve been receiving these cryptic messages in my office mailbox,” he said, handing her two scraps of torn loose-leaf paper, both folded in half, that he’d pulled from his blazer pocket. One read People Are Watching You, and the other Be Careful.

“Teenaged nonsense.” She sipped her wine, swirled it around, and set it back on the table. She was excited to see Sadie open her presents in the morning at breakfast.

“Or so I thought, but today Dorothy told me to call a lawyer. She knows everything, working in the front office all day long, of course. She said there’s a rumor you’re being set up. It was all so Hollywood movie–sounding that I laughed at her. But she looked deadly serious. She wouldn’t tell me anything else. Dorothy was acting strange— stranger than normal, anyway.”

“She’s such a nutbar, Dorothy. Set up for what? Did you believe her?”

Dorothy McKnight was the secretary, and she irritated both of them, especially at parties, always wanting to talk about conspiracy theories and how Barack Obama was a Muslim.

“So I called Bennie during my spare this afternoon— he’s the eldest son of my father’s lawyer. You know, they’re always at our Christmas parties?”

“No, he’s forty, if you can believe it,” he said. “I called him again tonight. I’m on edge, Joan. I just wanted to tell you this. I don’t know what’s happening.” He took another generous sip of wine.

“A practical joke? It’s so strange.”

George shook his head. “I really don’t know.” This was a phrase George—learned, stoic, opinionated—rarely used. He prided himself on knowing the things that mattered.

Sadie and jimmy jogged up the dirt path, wet bare feet on the stones between the bramble that curled into the sloping backyard. They were breathless when they reached the plateau, pausing where a row of kale and lettuces grew, waiting to be culled on her mother’s gardening day the following weekend. The rectangular in-ground pool that bordered their back deck made its usual hum of white noise. A circular hot tub, currently on the fritz, faced out onto the lake, edging out over the sharp lip of the hill. Ornate gardens sculpted carefully to appear wild surrounded the pool. Sadie leaned down and rubbed some lavender between her palms, cupping her hands around her face to inhale the warm scent on her way to the side entrance.

They snuck up the back stairs, rubbing their wet heads on the threadbare sunburst swim towels hanging from the coat hooks by the door to the basement. Jimmy traced a finger along Sadie’s spine, causing her to pause, shiver, and bat his hand away before she stepped over Payton, the fat sleeping tomcat on his designated fourth-step nap space. She headed for the kitchen barefoot, in search of iced tea. The plan to sneak up to Sadie’s room and finish what they had started was immediately thwarted by the unusual presence of her parents, seated at either end of the kitchen table.

The Woodbury parents were the academic sort, floating brains in denial of the body. Sadie reasoned that it was better not to talk about sex with them, to ensure that both she and her parents retained the privacy they both needed. It was less denial, she reasoned, more maturity. The same way that they all went to church on Sundays but never talked about God. Some things were meant to stay inside our own heads. When Jimmy stayed over, she was never sure if they knew or not. She did know that neither party was eager to discuss it.

When they entered the kitchen, the adults reacted with a sudden and uncharacteristic silence. Her mother’s brownish-gray bob was pushed back behind her ears with the help of her glasses. Joan usually had two facial expressions—tired from work or happy to have a day off. Her face betrayed a sense of resigned incredulity. She never drank after dinner.

“What’s up with you guys? You’re not usually up this late.”

“Nothing,” Joan said, in a way that sounded the opposite. She picked up the container of lemon squares and held them out to Jimmy, who put a whole one in his mouth and grabbed a second, grinning appreciatively while he chewed. “It’s past midnight . . .” Sadie sing-songed expectantly.

Joan stared at her daughter for a few moments before realizing what she meant.

Sadie felt a brief moment of birthday excitement, and then the house seemed to shake with a pounding on the front door, followed by an insistent baritone call: “We’re looking for George Alistair Woodbury!”

“What’s going on?” Sadie said, peering through the kitchen entrance and down the hall to the foyer. Red and blue flashed through the open windows, a light show for the symphony of cicadas. She approached the door tentatively. George sat back down at the table, staring into his glass of wine.

“Sadie, don’t. I’ll get it,” Joan said as she approached the door, peering through the peephole cautiously. She opened it slowly to find two plainclothes detectives and several uniformed officers.

“Hello, ma’am, is your husband home?”

They made it only a few feet down the front hall before spotting him through the living room, still at the kitchen table. He stood, knocking over his glass. It pooled, then slowly dripped onto the kitchen floor.

For months Joan would replay this moment, trying to decipher the look on her husband’s face. Was it guilt? Confusion? Indignation? Stoicism? Acting? But nothing, not even a revolving camera of omniscience, a floating momentary opportunity to narrate, would allow anyone to truly understand the truth about George. He became a hard statue, an obstacle, a symbol.

The father and the husband, from that moment, had been transformed.

From The Best Kind of People. Used with permission of House of Anansi Press. Copyright © 2017 by Zoe Whittall. 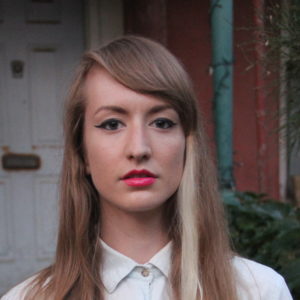 Parallelogram Parallelogram A muted video of two clean white women mouthing “lifestyle.” They approach a produce cart, one sniffs...
© LitHub
Back to top