The Banality of Donald Trump

On Hannah Arendt's Birthday, Examining her Relevance to our Political Moment

In 1929 the young Hannah Arendt earned her doctorate from the University of Marburg. In Germany at the time, a “habilitation,” or advanced doctorate, was required in order to be an academic and teach at a German University. Lauded as brilliant by her peers, Arendt would likely have gone on to obtain the habilitation and teach at a German University, were it not for the interruptions of history. In April of 1933, Hitler passed the “Law for the Re-Establishment of a Professional Civil Service,” the provisions of which included dismissals of those who were of “Non-Aryan descent” or were “politically unreliable.” Arendt, a Jew, fit the former category, and because of it her academic career in Germany ended before it ever began. The Nazis were our enemies, she would say decades later to one of her friends, and “a large number of Germans were behind them and this had been evident for the last four years to anyone who was not feeble-minded.” There were many who were not feeble-minded in her milieu, the philosopher Martin Heidegger among them. None who were not Jewish themselves seemed bothered by Hitler’s race-based purges.

Today, October 14, 2016, would have been Hannah Arendt’s 110th birthday. It is usual on the occasion of such commemorations to wish that an extraordinary longevity had been allotted to brilliant thinkers of the past, such that the present too could be parsed by their wisdom. In the case of Hannah Arendt, however, there is a measure of reprieve in her not being present to witness the particular political moment on which her 110th birthday falls. This fall, the United States seems gripped by the same yearning for authoritarianism, the same fervor for a cleansing from “foreign” others, that catalyzed the Germany of Arendt’s time. Donald Trump, the Republican nominee for President, has asked for a “a total and complete shutdown on Muslims entering the United States” and increased surveillance of those already present. Supporters at Trump rallies shout slogans such as “Kill All Muslims”; Islam polls as the most hated religion in the United States.

Americans who aren’t Muslim have not reacted as strongly to Trump’s Islamophobia, expressing louder outrage at Trump’s failure to pay Federal Income Taxes and his lewd and misogynistic characterizations of women than they have about the suggestion of a Muslim ban. To rephrase Arendt’s description of pre-1933 Germany, “It is evident that a large number of Americans support him.” Such is the acceptability of Islamophobia that in the second Presidential debate, Trump’s opponent Hillary Clinton responded to questions about this hatred not with a blanket denunciation, but with the suggestion that America needs American-Muslims to be good little spies, the state’s “eyes and ears.” Donald Trump may not win the election, but his recipe for hyper-nationalism sustained by the hatred, denunciation, and exclusion of a small minority has produced a tasty political dish for a large number of Americans. They are likely to want to eat it again and often.

Back in 1933, her hopes of an academic appointment shelved away, Arendt turned, as the intelligent but excluded often do, to activism. She helped the German Zionist organization, working with her friend Kurt Blumenfeld, to highlight the plight of the victims of Nazism. Unsurprisingly, the Gestapo swiftly arrested her for this research into Anti-Semitism. Had it not been for a sympathetic German jailer, Arendt would have been sent off to a labor camp where millions of Jews met their end. The narrow escape was enough of a scare for her to flee Germany for Paris. There she would remain until her eventual departure in 1941 for the United States. It is in the US that she would do her most widely read writing: The Origins of Totalitarianism, published in 1951, and Eichmann in Jerusalem: A Report on the Banality of Evil in 1963, along with several other books in intervening and following years.

It is Eichmann in Jerusalem that put Arendt at the center of a controversy that would cost her friends, force her to fend off caustic aspersions to her character, and even confront charges of Anti-Semitism. The book, an account of the trial of Adolf Eichmann, a man in charge of transporting and subsequently killing millions of Jews, argued that the men like Eichmann who carried out these unspeakable crimes were not rabid and crazy fanatics but rather cogs in a bureaucracy who were doing their “duties.” Eichmann, for Arendt was a “specimen of the new ‘mass man’ who was postindustrial” and who “was characteristically lonely, rootless, socially adrift, economically expendable and susceptible to both nihilism and authoritarianism.”

Criticism came from everywhere. Survivor accounts of the grotesque horrors of the Holocaust, the mass graves, the unrepentant and arbitrary killings, and the sordid evisceration of human dignity were also presented at the Eichmann trial. Arendt did not consider them relevant and decried their inclusion, which she felt subtracted from the legitimacy of the trial as a judicial proceeding. “The trial is a real show trial,” she wrote in frustration in a letter to her husband. The readers of Eichmann were not ready for this sort of critical dissection; evil that’s imagined as monstrous must be reiterated as such, and Arendt’s casting of Eichmann as a self-serving wimp did not resemble the monster everyone expected and wanted him to be. Nor was that Arendt’s only attack; she went further, questioning the collusion of Jewish leaders who had participated and facilitated the drawing up of lists, the provision of security, and the categorization and collection of goods from Jews who were exterminated by Eichmann. The bureaucracy of evil did not simply have a simpering clown at its top, she argued; it had a machinery that installed the very people it sought to destroy as pulleys and levers.

At their most obvious, Arendt’s expositions in Eichmann lend themselves to the drawing of parallels between Muslim-Americans now and Jewish-Germans then. These parallels are, however, roughhewn and possibly incidental. Their preemptive character, the fact that Trump is not yet elected, and American-Muslims not yet banned or exterminated, raises questions of when during their ominous ripening should auguries of greater tragedies be taken seriously.

But there is more in Eichmann than simply a cautionary note about nationalism constructed on the derision of a religious minority. Beyond the specific discussion based on details of German Jewry and Nazi bureaucracy, Arendt presents key theoretical insights into how the architecture of cruelty is erected, justified, and proliferated. The emphasis on the banality of Eichmann, the stammering, sniffling middle-class bureaucrat, the joiner looking for his own advancement within a bureaucratic system, exposes not the literal, visible evil of a fascist leader but the self-serving, motive-less obedience such a leader inspires among his followers. Evil is not one man, but rather the process of normalization via which exclusion, deportation, and finally extermination are all rendered morally justifiable.

The chapter titles in Eichmann in Jerusalem trace this very process of normalization. In each, Arendt delineates the steps: first Eichmann becomes an expert in the “Jewish Question” because it would, as he testifies at the trial, give him a leg up in progressing through the bureaucracy of the Reichstag. In the following chapter “The First Solution: Expulsion,” she quotes him: “I envisaged putting firm soil under their feet so they would have a place of their own, soil of their own,” pointing to the Zionism cause that Arendt herself had supported. In establishing this parallel, Eichmann expressed the belief that his part in the forcible expulsion of hundreds of thousands of Jews was “saving” them. As Arendt says: “He could not have seen the coming Final Solution but that he had saved them was a fact.” It is this manufacturing of “facts” that was central and crucial to the Nazi project

The next chapter is “The Second Solution: Concentration,” detailing the post-1939 period following the outbreak of the war when the Nazi regime became “openly criminal and totalitarian,” and a number of separate bureaucratic mergers led to the incorporation of the old German civil service into the more radical Nazi cadres. A new Nazi vocabulary was developed to present mass killing and genocide as objectively necessary and largely sterile. It referred to concentration camps in terms of “administration” and “extermination,” in terms of economics. It also created bureaucratic structures that competed for authority and prominence. Various arms of the Reichstag bureaucracy, Arendt writes, “were in fierce competition with one and another—which was no help to their victims since their ambition was always the same; to kill as many Jews as possible.” Here is the difference between evil as it is imagined and evil as it exists.

Arendt’s exposition of the mechanics of evil, the arming of cogs and commandants with rationalizations, with vocabularies that sterilize cruelty and construct “facts” that justify extermination, remain prescient today. Their application to America’s present political moment can reveal similar processes and point to the germination of evil before it’s able to grow into a devastation on the scale of the Holocaust. Since winning the Republican primary, Donald Trump has consistently attracted the support of at least 40 percent of likely voters. Good, white Americans, he suggests, cannot progress without removing, excluding, or imprisoning interloping Muslim, brown, and black others; without building walls; without “extreme vetting” and increased policing. By couching these prescriptions in a supposedly legitimate abandonment of political correctness, he has recalibrated morality; its new boundaries permit his supporters to champion xenophobia, Islamophobia, and the restoration of race-based privilege as a morally valid demand, as permissible political speech. If Arendt is right, there are many steps to come. One hopes they will never arrive, but it is perhaps also necessary to pause and consider whether the champions of Trump are Eichmann in their infancy. The tools for doing so are Hannah Arendt’s gift to the present. 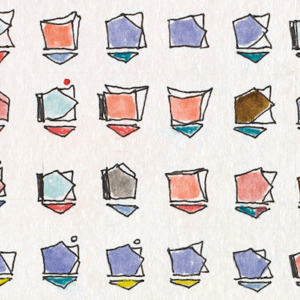 How many times did you apologize this week? How often did you have negative thoughts about yourself? What about directed...
© LitHub
Back to top