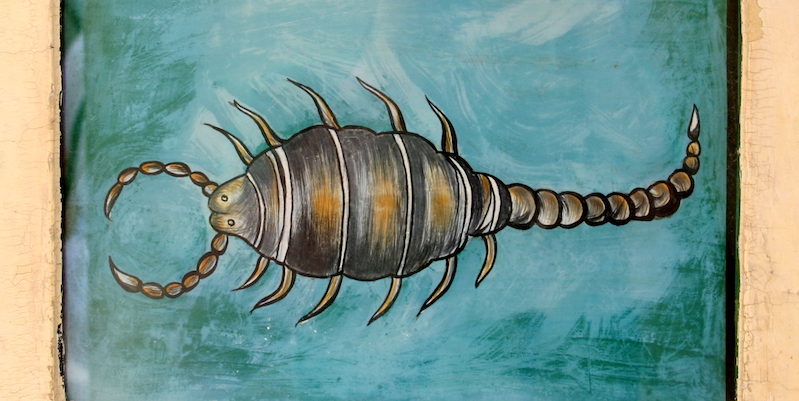 Behold the Zodiac Sign That Thrives Outside the Limelight

By Alex Dimitrov and Dorothea Lasky

If Scorpio were a city it would be Rio de Janeiro, with its close proximity to water and its furiously bright beaches and costumes, the statue of Christ the Redeemer overlooking all those hills and mountains. If Scorpio were weather it would be “as hot as hell,” because what else could it be. If Scorpio were a punctuation mark it wouldn’t be any one of them. Scorpio would just break off the sentence mid-phrase, never to return, except in 500 years to check in to see if you still missed them.

If Scorpio were a pair of earrings they’d be morbid, like a bronze cast of dead spiders, and they would somehow involve real bleeding, conjured from the inanimate metal spiders at will. If Scorpio were a vacation, it definitely wouldn’t be summer vacation, because all of that space where nothing is going on would annoy them—they would just like to get things going, thank you very much. If Scorpio were a period of day, it would be the hot light of noon, where the sun is at its highest. The devil’s hour, we call it.

Have you ever seen an eagle fly freely from tree to tree, in the open blue sky, and felt a profound sense of peace? Me too. And no, this isn’t some corny Americana image I am going for. I am trying to paint, at least in part, the picture of a Scorpio soul’s essence, and how it relates to an immortal sense of the everyday. The true essence of Scorpio is this lone bird, flying without a pack, circling the sky with its sublime calm. Eventually it will find other birds.

Scorpio as a loner is key to understanding this sign’s energy. Because whereas they do need bulletproof ties to family and a lifelong lover, they also need absolute freedom to pursue who they are, and their own projects and goals, without the nagging influence of others. Part of this comes from their need to be themselves without anyone else seeing this self completely, lest they try to overpower them.

It also has to do with Scorpio creativity. Scorpios need to make new things and ideas in order to be happy. It’s hard to do that sometimes when there is anyone else around. So this is why they need to be that lone eagle soaring from the trees time and again.

Keeping this in mind, Scorpios need to organize their lives so that they have enough alone time. No matter how much they protest, a Scorpio should always have enough time to venture out on their own (at least for an hour or two) to go see a new exhibit at the local natural history museum or read a book about an artist who works with jellyfish. Without this time, they can get resentful. Worse yet, for all of those people who do want them around all of the time (read: everyone), without this time, they really can just walk away in order to get it.

You can only hope that, when a Scorpio gets to be their own eagle and can acknowledge their basest drives, they learn to carve out time for themselves and don’t leave a bunch of people brokenhearted.

While there are plenty of famous Scorpios in the history books, the most important thing to realize about all of them is that they are usually not the people who are front and center. They tend to be second in command (think Joe Biden), where they can pull the strings and manipulate the situation but never have to fully be the face of power.

This allows them all kinds of actual power, and they will conserve their energy in ways a front-facing Leo never can. They will sit on their throne in the shadows, building momentum, so that when it is time to move and strike, they are always ready. Sure, this keeps them from getting all of the credit they deserve sometimes, but it keeps them from taking too much of the blame, too.

Scorpios will pretend they hate fame. The biggest liars among them (and believe me, there is a competition for the biggest Scorpio liar, and it’s hard to say who wins, because everyone involved is lying) will say that they hate the spotlight, and that the hot glare of the paparazzi is not what drives them. And while cuspy Libra-Scorpios like Kim Kardashian never even pretend to say this, this has to do with her considerable airy energy. Just remember that Kim’s momager, Kris Jenner, is a full-fledged Scorpio.

If Scorpio were a period of day, it would be the hot light of noon, where the sun is at its highest.

Scorpios love to secretly influence the person in power to do the things they want to do, without having the full limelight. Whereas a fire sign always excels on the stage, a Scorpio is a better fit behind the curtain, pulling the strings of the operation and telling everyone where to go with just the immense power of their eyes.

It’s truly amazing to consider how many Scorpio poets there are. The list is endless. Most poets who “make it” into our collective consciousness tend to be born around Halloween. It totally makes sense: Who better to tap into the language of the dead and the undead than those who are themselves both dead and undead? Scorpios are born knowing a lot about the underbelly of life.

If we think of Scorpio poets, we can’t help but think of two big ones: Sylvia Plath and Anne Sexton. These American women from the middle of the last century are often unfairly linked in the historical imagination. Driven to succeed, they became as famous and widely respected as poets as is possible. Although these two Scorpio poetic geniuses did know each other, like a lot of Scorpio-Scorpio combinations, they maybe weren’t what we might consider “friends.”

Both women wrote poems that are perfect portrayals of the imagination, getting deep into the collective psyche of what it means to be a feeling human being, which is just so Scorpio. Other Scorpio poets include Nathaniel Mackey, Marianne Moore, and Dylan Thomas. We are glad that so many Scorpios go on to become famous poets. We need them.

Pablo Picasso was a force of sheer creativity, making art that challenged convention throughout his life. Like any good Scorpio, he tested himself and the boundaries of the field with his ability to create out of strong instincts, influencing cubism and surrealism. His life is a metaphor for any famous Scorpio, artist or otherwise, or really any Scorpio at all. He lived without fear of what others might think of his work. Through a rigorous and almost religious devotion to it, he had faith in its immense worth. Like all famous Scorpios, just by being himself he changed the world in the process.

The Scorpio: A Poem

A wild acre of entirely palm trees. Blown over by rain? No, rain only falls. The wind makes sheets of invisible momentum. Do you mean that the entire landscape was flooded with debris? No, I mean to say that the whole world was heavy with intention. Asking questions. Silently. Going in and going out, in a rather methodical fashion. Making everyone bleed. Soft and worn-out shirts giving way to sheets of soft and worn-out linen giving way to soft and subtle naked bodies. Giving way to what. Going in and going out. Of the underworld. Planting spring shoots with potatoes. But were they orange? The potatoes? Oh what a fool you are! All that very bitter wheat. With which you made your supper. No, but what about the wild rush. What about all of those things you promised to the moon? Oh forget everything. You won’t, but. Oh go on. Live life as you wish. Without me. 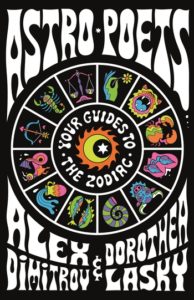 From Astro Poets: Your Guides to the Zodiac by Alex Dimitrov and Dorothea Lasky. Copyright (c) 2019 by the authors and reprinted by permission of Flatiron Books.

Alex Dimitrov and Dorothea Lasky are the duo behind the beloved Twitter account @poetastrologers, better known as the Astro Poets. Dimitrov is the author of three poetry collections, and his work has been published in The New Yorker, The Paris Review, and The New York Times. Lasky is the author of six books of poetry and prose. Her work has been published in The New Yorker and The Paris Review, and she is an Associate Professor of Poetry at the Columbia University's School of the Arts. 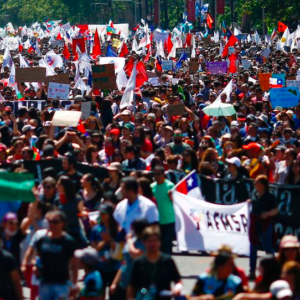 Right now, there is a human rights crisis in Chile. Following massive protests against an increase in public transportation...
© LitHub
Back to top
Loading Comments...