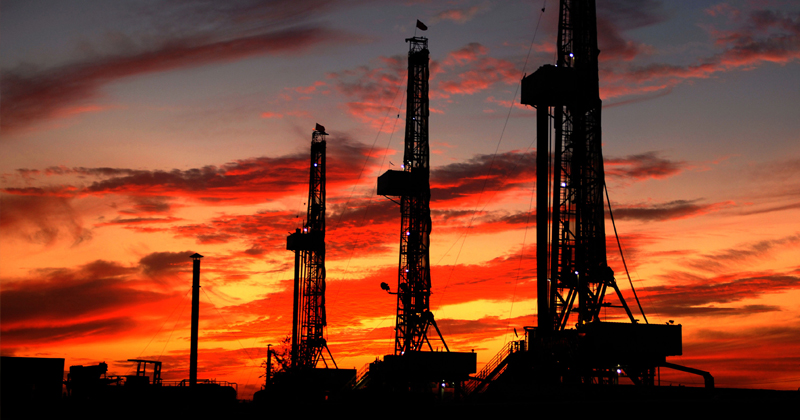 America's Answer to Energy Scarcity Has Always Been to Dig Deeper

The “Appalachian problem” doesn’t seem to me to be political, economic, or social.
I believe it is a spiritual problem and its name is greed.

–Our Appalachia: An Oral History, edited by Laurel Shackelford and Bill Weinberg

Four hundred million years ago, dragonflies the size of crows drifted above a giant inland sea. The first sharks swam in its brackish currents, along with algae and other primordial creatures. As they died and sank to the seafloor, their remains petrified, turning into fossil fuel. Oil and gas were trapped in the silt that became a sedimentary rock called shale. Over the next 60 million years, as the sea receded and left behind freshwater bogs, the plants and trees that collapsed into them formed coal, the youngest of earth’s fossil fuels. At first these layers of oil, gas, and coal piled tidily atop one another. Then, under tremendous heat and stress, they twisted and buckled, in some places rising to the surface, in others, remaining miles belowground.

In Appalachia, people have employed these fuels for centuries, albeit in unusual ways. There’s evidence to suggest that as many as 600 years ago, the Native inhabitants of what’s now Western Pennsylvania dug pits along a riverbank to collect petroleum for the treatment of consumption and venereal disease. When George Washington rode westward before the Revolutionary War in 1753, he found that both coal and natural gas had already been discovered along the frontier. For the next hundred years, coal powered the young country’s growth. Natural gas proved harder to harness. It leaked from pits that miners had dug for salt. Some towns figured out how to pipe gas to light streetlamps; others managed only to blow themselves up. In 1859, Colonel Edwin Drake struck oil in Western Pennsylvania. Pennsylvania became the birthplace of the US oil industry—the world’s first oil rush whooshed through the state and vanished by the 1870s. It wasn’t that the oil was gone; the rest was simply too costly to reach.

America’s answer to its energy needs has always been to dig deeper; the question was how. Over the past several decades, a technological innovation called hydraulic fracturing, or fracking, has allowed the extraction of the gas embedded in deep rock. Fracking frees fuel from shale by drilling a mile or more straight down into the earth and then out sideways for as much as another two miles. The straw that Daniel Day-Lewis so fiendishly described in There Will Be Blood no longer has to go straight into the milkshake. It can bend and turn in nearly any direction.

A decade ago, fracking kicked off a gas boom, which flooded parts of Appalachia with money. It also took a toll on those who lived where carbon was harvested. In March 2011, I attended a meeting of concerned farmers, who were also retired coal miners and steelworkers, at the airport in Morgantown, West Virginia. There, I met Stacey Haney, a nurse and single mother of two, who invited me to her eight-acre farm just over the border in southwestern Pennsylvania’s Washington County. She and her children, Harley and Paige, 14 and 11, feared they were sick from exposure to a toxic industrial site next door to their home. All three had low levels of gas-related chemicals in their bodies, but Harley, who’d recently been diagnosed with arsenic poisoning, was the worst off.

“Resource extraction has long fed a sense of marginalization and disgust, both with companies that undermine the land and with the urbanites who flick on lights without considering the miners who risk their lives to power them.”

When I went to see her the next day, Stacey drove me through the nearby towns of Amity and Prosperity, where her family had lived for 150 years, and around the countryside. Red and white drill rigs dotted the hillsides planted with timothy. Sandy access roads snaked through clover fields. Green condensate tanks shimmered in the distance. This was in the middle of the gas rush that spanned a decade from 2005 to 2015; there were five well sites within a mile of her home. It would be easy to cast the industrial incursion as a blight upon the bucolic, and to many it was. To others, however, the arrival of fracking was the solution to decades of decline.

Amity and Prosperity don’t occupy a pristine landscape. The history of energy extraction is etched into Appalachian hollows. The wooden towers of oil wells have dotted Amity’s goldenrod fields since 1885, derricks nodding in wild peppermint. Following the Civil War, with wool prices low, sheep farmers sold the rights to the coal under their farms. Pennsylvania’s abundance of coal and iron, along with its network of rivers, made it an excellent place to produce steel. In 1875, Andrew Carnegie built the nation’s largest steel mill along the Monongahela River, which propelled Pennsylvania to becoming the steel capital of the world.

Rural citizens lived alongside industry for generations, taking jobs and small payouts for mineral leases. Often, they acquired a sophisticated understanding of property and mineral rights, becoming well versed in the history and value of what lay beneath their feet. This arrangement also helped people remain on their land long after farming was profitable. Yet despite these small leases, which might provide free gas and a royalty of a few hundred dollars a year, most of the mineral profits went elsewhere. The wealth fled the land, leaving behind thousands of miles of incarnadine streams ruined by acid mine drainage, artificial mountains of slag heaps, and gutted coal patch towns. Company towns faced mass unemployment, along with the environmental and social problems industry left behind.

Exploiting energy often involves exploiting people. In Amity and Prosperity, as elsewhere, resource extraction has long fed a sense of marginalization and disgust, both with companies that undermine the land and with the urbanites who flick on lights without considering the miners who risk their lives to power them. Today, the fracking boom has reinforced these convictions. This time, a handful of people have made significant amounts of money. With more to lose, they’ve become still more distrustful of state and federal authorities and environmentalists—as well as of neighbors who speak against the industrial boom. As they see it, the common outsider view that Appalachians are victims of forces they don’t understand is naïve and condescending. To them, opposing fracking is an ideological stance couched in a weak understanding of the actual technique and how it can be employed safely.

Split 50-50 between red and blue, Pennsylvania is the one purple state in which fracking has flourished. This has rendered the technique as much a political question as a practical one. Fracking has deepened the schism between Democrats and Republicans. It has also brought with it the promise of energy independence and injected much-needed cash into struggling places. Yet it has fractured communities, dividing those making money from those whose water, air, and health are threatened.

Stacey and her kids lost their land and a good part of their lives waging a battle against the oil and gas industry. For the past seven years, amid an ugly public fight, they allowed me to follow their family’s intimate challenges—the loss of animals, the nights spent on the bathroom floor, and the travails of a sick kid who doesn’t want to leave his basement room. They are among those paying the human cost of American energy. 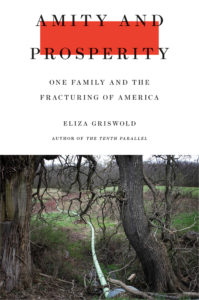 From Amity and Prosperity: One Family and the Fracturing of America. Used with permission of Farrar, Straus and Giroux. Copyright © 2018 by Eliza Griswold.

Eliza Griswold, a Guggenheim fellow, is the author of a collection of poems, Wideawake Field (FSG, 2007) and the nonfiction book, The Tenth Parallel: Dispatches from the Fault Line Between Christianity and Islam (FSG, 2010), a New York Times bestseller that was awarded the J. Anthony Lukas Prize. Her most recent book is Amity and Prosperity. She has worked with Seamus Murphy in Africa and Asia for more than a decade. She lives in New York City.

Dear Book Therapist: How Do I Survive My C- Marriage?

How to Write Across Difference 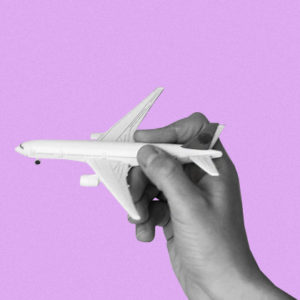 Dear Book Therapist: How Do I Survive My C- Marriage?

Do you have a problem? Do you want a book to help you solve it? Book Therapist is Rosalie Knecht, LMSW, a licensed therapist...
© LitHub
Back to top
Loading Comments...