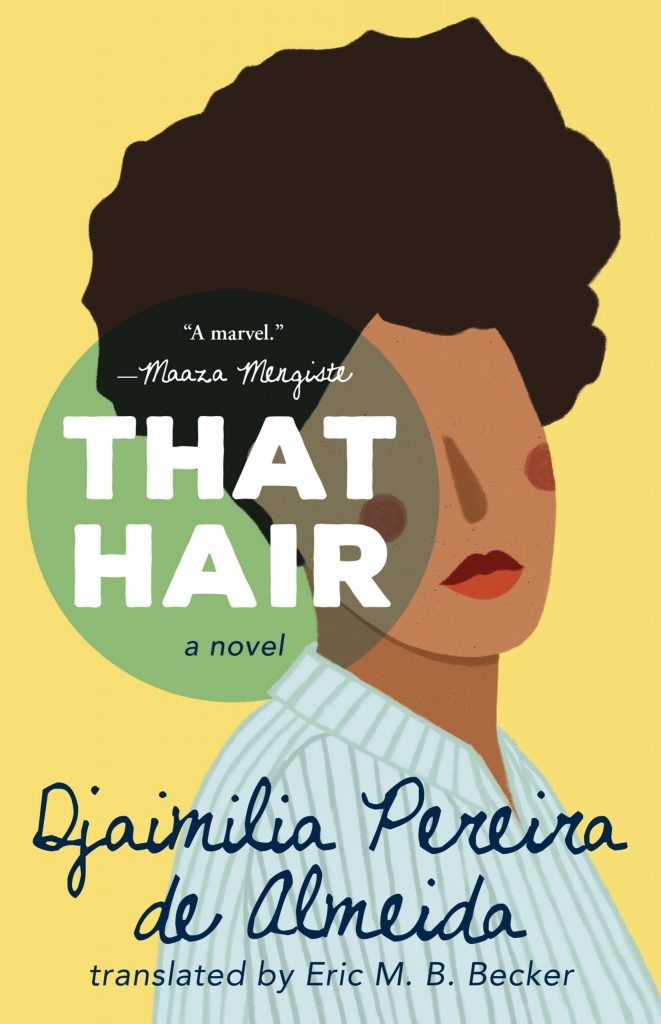 The following is an excerpt from That Hair, the story of coming of age as a black woman in a nation at the edge of Europe that is also rapidly changing. Djaimilia Pereira de Almeida is the author of five books, and her writing has appeared in Blog da Companhia das Letras, Common Knowledge, Granta.com, Granta Portugal, Ler, Revista Pessoa, Quatro Cinco Um, Revista serrote, Words Without Borders, Revista ZUM, and elsewhere.

My mother cut my hair for the first time when I was six months old. The hair, which according to several witnesses and a few photographs had been soft and straight, was reborn coiled and dry. I don’t know if this sums up my still-short life. One could quite easily say just the opposite. To this day, along the curve of my nape, the hair still grows inexplicably straight, the soft hair of a newborn, which I treat as a vestige. The story of my hair begins with this first haircut. How might I write this story so as to avoid the trap of intolerable frivolity? No one would accuse the biography of an arm of being frivolous; and yet it’s impossible to tell the story of its fleeting movements—mechanical, irretrievable, lost to oblivion. Perhaps this might sound insensitive to veterans of war or amputees, whose imaginations conjure pains they can still feel, rounds of applause, runs along the beach. It wouldn’t do me much good, I imagine, to fantasize over the reconquest of my head by the soft-stranded survivors near the curve of my neck. The truth is that the story of my curly hair intersects with the story of at least two countries and, by extension, the underlying story of the relations among several continents: a geopolitics.

Perhaps the place to begin this biography of my hair is many decades ago, in Luanda, with a girl named Constança, a coy blonde (a fetching “typist girl,” perhaps?), the unspoken youthful passion of my black grandfather, Castro Pinto, long before he became head nurse at Luanda’s Hospital Maria Pia; or perhaps I ought to begin with the night I surprised him with braids that he found divine. I’d spent nine hours sitting cross-legged on the floor at the hairdresser, head between the legs of two particularly ruthless young girls, who in the midst of doing my hair interrupted their task to turn some feijoada and rice pudding from lunch into a bean soup, and I felt a warm sensation on my back (and a vague odor) coming from between their legs. “What a sight!” he said. Indeed: perhaps the story of my hair has its origin in this girl Constança, whom I’m not related to in any way, but whose presence my grandfather seemed to seek in my relaxed hair and in the girls on the bus that, after he was already an old man living on the outskirts of Lisbon, would take him each morning to his job at Cimov where, his back hunched, he swept the floors until the day he died. How to tell this history with sobriety and the desired discretion?

My mother cut my hair for the first time when I was six months old. The hair, which had been soft and straight, was reborn coiled and dry.

Perhaps someone has already written a book about hair, problem solved, but no one’s written the story of my hair, as I was painfully reminded by two fake blondes to whom I once temporarily surrendered my curls for a hopeless “brushing”—two women who, no less ruthless than the others, pulled my hair this way and that and commented aloud, “It’s full of split ends,” as they waged battle against their own arms (the masculinity of which, with their swollen biceps bulging from beneath their smocks, provided me, the entire time, with a secret form of revenge for the torture they inflicted). The haunted house that every hair salon represents for the young woman I’ve become is often all I have left of my connection to Africa and the history of the dignity of my ancestors. However, I do have plenty of suffering and corrective brushings after returning home from the “beauty parlor,” as my mother calls it, and plenty of attempts not to take too personally the work of these hairdressers whose implacability and incompetence I never summoned the courage to confront. The story I can tell is a catalog of salons, with Portugal’s corresponding history of ethnic transformations—from the fifty-year-old returnees to the Moldavian manicurists forced to adopt Brazilian methods—undergoing countless treatments to tame the natural exuberance of a young lady who, in the words of these same women, was a “good girl.” The story of surrendering my education in what it meant to be a woman to the public sphere is not, perhaps, the fairy tale of miscegenation, but rather a story of reparations.

No white woman on a city bus ever gave my Grandpa Castro the time of day. Humming Bakongo canticles to himself, Papá was a man whom you would never suspect of carrying this time-honored tradition with him as he sat next to you on the bus. A man of invisible traditions—and what a ring this would have to it, capitalized: The Man of Invisible Traditions, a true original. No one ever looked at him, this man who, by his own account, was rather cranky, “the Portuguese kid,” as he was known as a young man, who was always shouting, “Put it in the goal, you monkey,” referring to black soccer players, and who categorized people according to their resemblance to certain jungle animals, even describing himself as “the monkey type,” the kind of person who patiently waits for the conversation to come to a close before proffering his wisdom.

I come from generations of lunatics, which is perhaps a sign that what takes place inside the heads of my ancestors is more important than what goes on around them. The family to whom I owe my hair have described the journey between Portugal and Angola in ships and airplanes over four generations with the nonchalance of those accustomed to travel. A nonchalance that nonetheless was not passed on to me and throws into stark relief my own dread of travel; a dread of each trip that—out of an instinct to cling to life that never assails me on solid ground—I constantly fear will be my last. Legend has it I stepped off the plane in Portugal at the age of three clinging to a package of Maria crackers, my hair in a particularly rebellious state. I came dressed in a yellow wool camisole that can still be seen today in an old passport photo notable for my wide smile, the product of a felicitous misunderstanding about the significance of being photographed. I’m laughing with joy, or perhaps incited for some comic motive by one of my adult family members, whom I reencounter tanned and sporting beards in photographs of the newborn me splayed atop the bedsheets.

And meanwhile it’s my hair—not the mental abyss—that day in and day out brings me back to this story. For as long as I can remember, I’ve woken up with a rebellious mane, so often at odds with my journey, no sign of the headscarves recommended for covering one’s hair while sleeping. To say that I wake up with a lion’s mane out of carelessness is to say that I wake up every day with at least a modicum of embarrassment or a motive to laugh at myself in the mirror: a motive accompanied by impatience and, at times, rage. It’s occurred to me that I might owe the daily reminder of what ties me to my family to the haircut I received at six months of age. I’ve been told I’m a mulata das pedras, as they say in Angola, not the idealized beauty that mulata conjures for them but a second-rate one, and with bad hair to boot. This expression always blinds me with the memory of rocks along the beach: slippery, slimy stones difficult to navigate with bare feet.

The lunacy of my ancestors factors into the story of my hair like anything else that demands silence; it is a condition from which the hair might be an ennobling escape, a victory of aesthetics over life, as though hair were either a question of life or aesthetics, but never both. At the same time, my deceased ancestors rise up around me. As I speak they return as versions of themselves distinct from the way I remember them. This is not the story of their states of mind, which I would never dare to tell, but that of the meeting between grace and circumstance, the encounter of the book with its hair. There is nothing to say of hair that does not pose a problem. To say something consists of bringing to the surface that which, because it is second nature, often remains undetected.

It’s occurred to me that I might owe the daily reminder of what ties me to my family to the haircut I received at six months of age.

Stepping off the plane, evoking the image of a statesman’s lover who lands hours after the plane full of government officials, the girlish Constança would begin by unbuttoning her jacket. The steamy Luanda air hinted at the long-awaited absence of her aunts from strolls through the park, during which, by simple miracle, there’s nothing to suggest that she’d been discovered walking hand in hand with my grandfather. From the state of the weather to the state of the state, she traded bits of conversation in exchange for being hand-fed biscuits dipped in tea. I can identify in her Papá’s noble carriage, in the era’s high-waisted pants, the coat, the hat, a certain uprightness that his old immigrant’s hunchback would later subdue. During the newscast’s commercial break—a toothpaste ad—Constança was a frequent subject of conversation between my grandfather and me, our fear of hurting my grandmother’s feelings often interrupting. But it was also a pretext to blackmail an irritated Grandpa Castro: either he gave us money for candy or “Hey, what about that blonde girl?”—as though we’d divined that there was more to this girl than the promise of fresh breath and reduced tartar. I leave her here, like a half-empty tube of Couto-brand toothpaste, abandoned in a plastic cup covered in a layer of mineral scum, next to the toothbrushes, in memory of my dear Grandma Maria, in whom a burning jealousy took root that would last for the rest of her life.

Meet the Unacknowledged Hero Who Discovered That Handwashing Saves Lives 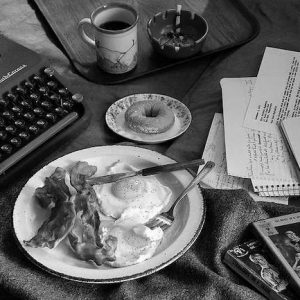 The Long Tradition of Writers Needing Ritual I am writing this at a writers’ residency in the town of Ghent in Hudson Valley. I’ll be here for a month, and my aim is to finish...
© LitHub
Back to top