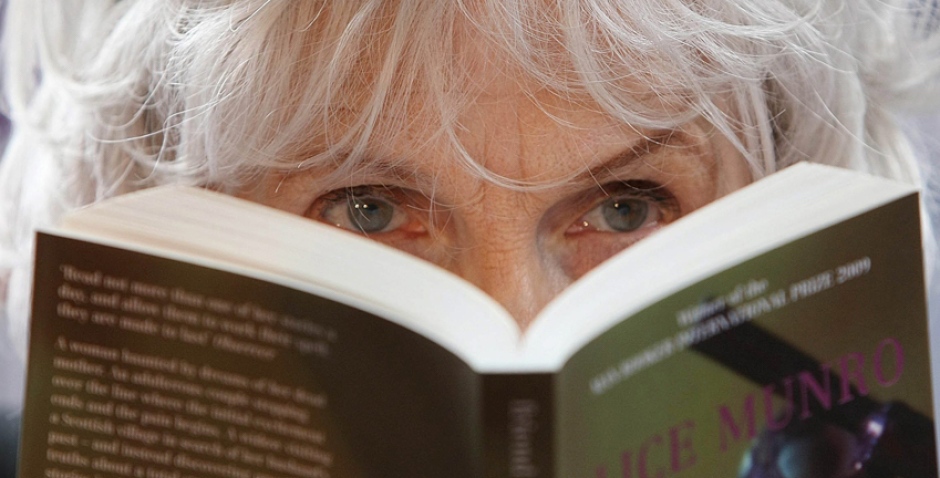 VIA THE 92ND STREET Y

The following is from the 92 Street Y’s 75 at 75: Writers on Recordings series. The recording below, of Alice Munro reading her short story, “Differently,” was made on April 8, 1990. Munro turns 86 today (happy birthday, Alice!).

As I began listening to this recording of Alice Munro at the 92nd Street Y, I realized that I’d never actually heard her voice before. It isn’t quite what I expected or what I’d heard inside my head as I read, not as confiding or subtle. Is it a little more abrasive, buoyant… defiant? Anyway, I like it, its prickliness and bounce. I’ve added a tiny nuance of difference, in my mind, to what’s written on the page.

And another thought, right away: it’s clear her stories are written for the eye, to be read on the page, not for the listening ear. (I remember thinking this same thing when I heard one of her stories read on BBC radio, and wondered how much I’d have understood of it, if I hadn’t known it beforehand.) What do I mean by that? Of course her sentences are meant to sound. They have a superb music—the rhythm and the music are all-important. But it’s a music that sounds best inside the head. There’s almost too much going on at any given moment for the ear to take in at first hearing. We need the eye darting back, checking, piecing things together, making them out. Who’s speaking? When? Have we slipped back into the past again? At which point of the palimpsest of the past, all those phases and changes layered over one another? We may be halfway through and then turn back to the very start and understand at last why we began with the creative-writing teacher telling Georgia she was writing about “too many things”—and then seemed to lose him. (That opening, incidentally, ought to give everyone who teaches creative writing a shiver of unease!)

There are her interpolations, too, which are hard to phrase correctly if they’re read aloud—I mean the remarks set apart in brackets that the listener can’t see: the asides, the afterthoughts. The texture of her writing is so mobile, flickering, intricately woven. It’s like the texture of thought itself, of memory. Perhaps this is most strikingly the case at the story’s beginning, when the whole structure is being established, built out of the air in all its complexity. Georgia lives with the creative-writing teacher now. She’s revisiting Victoria where she used to live, when she was married to her first husband Ben, and she’s remembering her lover from those days, Miles, and also remembering the wicked, wonderful, wealthy friend she had then, Maya, who’s dead now. Maya slept with Miles, and after that Georgia never spoke to either of them again. Toward the end of the story, once we’re seized in that crisis, the affair and then Maya’s betrayal and the end of it, there’s a more forward-driven narrative flow. That’s a fairly characteristic Munro pattern, I think. At the beginning of a story a piecing together, elaboration, complication—and then, from some point about halfway, a sense of release, as in a great rush the pent-up story spills over and goes tumbling, unravelling toward its end.

Listening made me very aware of a movement in the writing, backward and forward between its material solidities (what, where, when, how?) and the changeable fluidities of thought and feeling, imagination. Even at the crisis, when Maya confesses on the phone what she’s done, it’s crucial somehow to know not just that Maya and Miles have slept together, but also where Miles had parked his motorbike, and what their plan was if Raymond, Georgia’s husband, came home unexpectedly. While Maya, later, sits at Georgia’s kitchen table pleading for forgiveness, Georgia cleans the kitchen in silence, dismantling the elements and putting them back again, wiping the counters and polishing the taps and straightening out the cutlery drawer. Everything must work in a Munro story. The intricacies of practical arrangements (What does Georgia tell the babysitter? How did Raymond meet his second wife? Where does the money come from?) are never beneath the story’s attention; in fact, for Munro, practicalities not only have to be worked out, they’re part of the poetry. The material commonplaces of each present moment become the yearned-for magnificent mysteries of the lost past—and of art.

Revisiting Victoria after decades, Georgia takes a detour to see the house where she once lived with Ben. Once, she had longed to escape the respectable, domesticated life she had in there—it had seemed a sham, in that destructive time after the affair when everything seemed a sham. Now, every ordinary detail of that lost life—the garden, the room where she lay when she’d had her wisdom teeth out and Ben read to her from Dubliners, the oak floors they’d sanded together—is resonant with power and meaning, emotional affect. This isn’t because the moral of the story is that Georgia regrets leaving. Nothing so simple. Regret in a Munro story is as slippery and equivocal as love. (Georgia “thought of being launched out on a gray, deep, baleful, magnificent sea. Love.” And that’s just a couple of days before Miles sleeps with Maya.) Regret could attach to anything. If Georgia hadn’t left she’d have regretted that, too, of course. And anyway she had to leave. This leaving is one of the essential gestures that recurs over and over in Munro’s stories—this moment of leaving that isn’t an abstract moment but a moment historically defined, happening somewhere around the 1950s and 60s and 70s. Everyone in the western world, but women in particular, had started looking at the framework of their lives and not believing in it any more, not believing in its authorities and its customs and its underpinning ideologies—in, as Munro puts it here, “a world of ceremony, of safety, of gestures, of concealment . . . of fond contrivances.” Munro’s work doesn’t celebrate the moment of leaving—she just describes it. It’s her subject.

Perhaps that’s not quite right. She does celebrate it, she can’t help but celebrate it. There’s no more forensic chronicler in our literature of the daily outrages of friendly-enough patriarchy, I suppose: the outrages and the comedy. In this story, there’s this sublime deadpan: “Ben and Raymond did not believe in leaving women out of the conversation. They believed that women were every bit as intelligent as men.” Meanwhile Georgia and Maya admit to each other what weighs on them: “The innocence of these husbands—the hearty, decent, firm, contented innocence” that “makes intimacy a chore.” Even patriarchy—especially patriarchy—is a complex story, often a funny one, and power can sometimes twist around peculiarly between oppressor and oppressed in any intimate relation.

Munro celebrates the moment of leaving and she doesn’t. What leaving delivers has too many ironies of its own, for starters (and some of them of course do have to do with patriarchy all over again—Miles’s cruelty, using Georgia’s own lusts against her, taunting her “as if he were licking fanatically at something loathsome”). From the far side of leaving, the “fond contrivances” of past oppressions may reveal themselves differently, in a more subtle, kindly light.

“Fond contrivances.” What exactly does she mean by that? She means, I think, the collaborative work of couples, in an arrangement like a conventional marriage. There’s an element of deception in it, of faking—“contriving,” fixing up something flawed to make it look as if it’s working. And it has overtones of thrift, too, of making do with something because it’s all you’ve got. But the contrivances are fond—not loving, but fond. Fondness might be kinder than love, that baleful treacherous gray sea. I’m still thinking this one out. I haven’t finished with fond contrivances yet.

It’s such a characteristic Munro crux—a formulation that looks transparent and straightforward at first glance but then turns out to elude paraphrase, elude perfect understanding. Alice Munro writes a plain prose with an easy workaday vocabulary, natural-sounding un-mannered sentences. Although she loves Eudora Welty, for instance, she never sounds anything like her, there’s nothing fanciful or extravagant in her language; in her effects, she doesn’t look in any obvious way like an heir to Welty’s high-modernism. And yet there are such profundities. Listening to the story being read on this recording, time and again my attention snagged against these luminous, teasing phrases, complex opaque utterances that wouldn’t yield their meaning easily, but worked suggestively just on the edge of my comprehension. The story ends with a regret—not for Ben nor Miles, but for the evenings Georgia had spent working in a bookstore in that past: “The light in the street, the complicated reflections in the windows. The accidental clarity.” Those are the last words of the story. Accidental clarity: what’s that? Something beyond the range of “regret,” or choice? Contingent, not derived from past or future? A state of mind, or of being, that can’t be striven for, or even desired? Grace, even. But wouldn’t it be a false note, phony, if instead of “the accidental clarity” she had written “grace?”

The pregnant, layered words exact such intensity of attention, such work of teasing out, testing. Another reason for reading Munro slowly with the eye—taking time, a long time, a lifetime, to understand her. She’s a difficult writer—every bit as difficult as Beckett or Coetzee, say. But the difficulty of her thought is embedded in the prose of everyday, because that’s where she finds her meaning, hidden in the opacity of daily things, lurking just under the surfaces of our everyday words, our ordinary lives.

Tessa Hadley teaches literature and creative writing at Bath Spa University College. Her first novel, Accidents in the Home was longlisted for The Guardian's First Book Award. She lives in Cardiff, Wales. Her most recent work of fiction is Bad Dreams, a story collection.

If Consciousness Isn't A Stream, How Do We Represent It?

Dystopia is Realism: The Future Is Here if You Look Closely 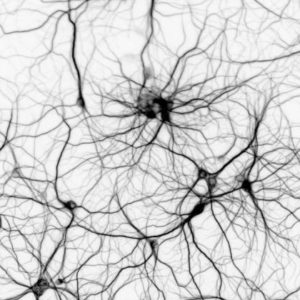 If Consciousness Isn't A Stream, How Do We Represent It?

What is consciousness? For literary studies the most influential framework has been William James’s “stream of consciousness.”...
© LitHub
Back to top