Some Prefatory Remarks for an Imaginary Reading

Hi, I’m Teddy Wayne. Thank you for having me here tonight—what a beautiful campus. Everyone’s just been so welcoming, and I’ve enjoyed getting to know some of the students and reading their work.

Can you guys hear me back there? I never know how close to be to the mic. Louder? Softer? Ok.

I was planning to read today from my novel, but I’ve done that—I counted—37 times by now, and I’m starting to get bored of it. So I wrote something new while I was here. I haven’t really had a chance to revise it; please be kind. Also, I was debating whether to write it in first or third person, and changed it a few times, so if there are any inconsistencies or subject-verb disagreements, that’s why.

For those of you who don’t know what a subject-verb disagreement is, this can be a sort of grammar craft lesson. It’s when a subject and verb argue over politics. And then the subject finally says, “Ok, verb, let’s just agree to disagree.” And it’s permanently a little awkward after that.

This is an excerpt of something that might be longer. I don’t think it knows yet if it’s a story or maybe a novel. I’m hoping at some point it’ll just announce itself, like, “Hey, I’m a novel,” or more likely, “Hey, stop writing me, I’m awful.”

But since it’s an excerpt, you should probably know a few things about it before I start. Um, um, um… All right, first, the protagonist is also named Teddy, but in case my parents ever read or hear this, it is not autobiographical. I just put in “Teddy” at first as a placeholder and haven’t come up with a new name yet.

So, anyway, “Teddy,” in quotes, is a writer. But as we come into this, he hasn’t been writing much lately. It’s not writer’s block, which exists only in bad movies. It’s more that he hasn’t even really tried. I suppose he’s undergoing a mini-crisis of faith in his chosen art form, in which he wonders if it’s that meaningful or necessary an enterprise.

If all the fiction writers in the world stopped writing for a year, civilization would get along just fine, but if all the plumbers stopped plumbing, chaos and disease and death would ensue.

In the section just before this, he compares writing to plumbing, because another writer has used the cliché “plumbing the depths” in reference to his own work, and “Teddy” thinks that if all the fiction writers in the world stopped writing for a year, civilization would get along just fine, but if all the plumbers stopped plumbing, chaos and disease and death would ensue.

But that’s just the utilitarian argument. He then reasons that art is art precisely because it’s not necessary. So it must have some deeper, intangible resonance, or else natural selection would have eradicated it years ago. And that resonance, many others have said in different words, is the exchange of an unspeakable private language with another person, which makes each participant feel less alone. And only through the attempt and medium of art can that private language be voiced. This is an aesthetic corollary to Wittgenstein’s argument against the existence of a private language in the Philosophical Investigations, which “Teddy” read in college and understood better then.

Except he worries that he’s not hearing that private language in other works as much as he once did. Compared to when he was a kid, and every book seemed to offer up a new world of comprehension, lately when he reads, he focuses more on laying bare the writer’s craft at the expense of being swept up in the dreamlike state of reading, or even worse, thinking about the author as some kind of media personality or professional rival.

Ok, I just explained a lot, so to briefly recap: “Teddy’s” worried he’s a fraud, and then he worries that worrying about being a fraud doesn’t get him off the hook, and then he worries that no matter what, it doesn’t help with the problem of ambition, which is that maybe his ambition exceeds his talents, and that for a long time, like many people, he’s coasted by on the quality that comes most easily to him—in his case, a certain facile cleverness—in life and in writing, and that facile cleverness impresses people at first, but it’s an allergy-test pinprick, not a surgeon’s scalpel, and things might be easier if his ambition were scaled down to a more reasonable level. Then he’d be happy with just doing solid work as opposed to trying, and inevitably failing, to pull off outsized achievements, in a Sisyphean cycle of discontent.

Hold on, I need a drink of water. This is for me, right? Thanks.

So that makes him question if he writes because he truly loves thinking and transcribing those thoughts through recorded language, or because the validation and attention he’s thus far accrued from it are so seductive and ego-stroking. It’s a taboo topic writers seldom broach, because it would be the most fraudulent motive to admit to. But he wonders how many of them would really continue writing if no one ever saw their work and told them they were brilliant and spoke to them with reverential awe. Writers who become recluses or near-recluses don’t count, because they did get all the attention in the world at first, then rejected it, but by rejecting it accumulated a more hallowed form of notice. So he comes back to the egoist/fraud issue again, since if you’ve never asked yourself whether you write for the approval of others, maybe it means you crave their approval most of all.

He does know that when people say they unequivocally “love” to write, he’s pretty certain they’re either lying or are not doing it all that much, because when it’s something you’re supposed to do constantly, it’s not always so fun. But on the flip side, it’s even more vexing when people say writing is the hardest thing to do, because he can think of a thousand jobs that are harder, like being a doctor, or a coal miner, or a professional athlete, or a single parent. Not to say writing is child’s play, and obviously it’s hard to do well, but he imagines plenty of soldiers around the world fighting in gruesome wars would rather be at air-conditioned desks writing prose poems. To be able to write is a luxury, and the fact that he’s so conflicted about getting to do this for a living makes him feel even guiltier.

Sorry, I’m getting very off-track here. How am I doing on time?

The point is, “Teddy” has just thought about the usefulness of art, and if he’s lost his capacity to absorb the private language of another person via literature, and if he’s a fraud or not a fraud or, as these things tend to be, some admixture, and if his ambition outstrips his talent and he’s compensated for it with a hollow cunning, and if he writes for acclamation more than he’d like to admit, and if other writers feel the same way but they never confess to it, or if they actually draw from a deeper, purer well of artistic integrity, or if they’re shallower because they won’t acknowledge it, even to themselves, and then if anyone wholeheartedly “loves” writing or if that’s just a line they say or the sign of a dilettante, and then about the people who say writing is the hardest thing in the world, and how privileged and self-aggrandizing a statement that is.

And he wonders if his cynicism has metastasized too far to the borders of his mind, if he’ll never be able to recover, or if, as they say, a cynic is really just a frustrated idealist, so somewhere beneath his defensiveness and distrust and melancholy is something that is all the more tender for its prickly carapace.

Hi, there—it’s all right, you can come in. There are plenty of seats in the front.

Anyway, just before we enter this section, “Teddy” finally sits down and writes about these thoughts, and what he’s written is not his best or most polished work, and it leans heavily on a certain facile cleverness, but he thinks that maybe someone else out there has felt the same way at one time, or all the time, and if he can share it with that person, then they’ll publicize the private language neither of them was voicing, and even if that hasn’t happened, at least it’s helped him a little bit, and sometimes that’s all you can ask for, which is the hoariest writerly cliché of all, one he loathes hearing self-important authors proclaim, that you need to connect only with one person to make art worthwhile, except in this case, that one person is yourself.

All right, I believe that’s everything you need to know. I appreciate your patience. I’m not really sure how it’s going to end yet.

Thank you in advance. 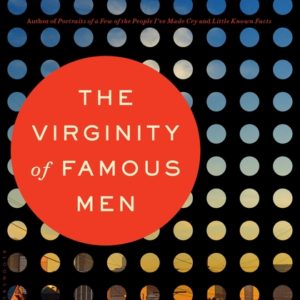 The famous do resemble the unfamous, but they are not the same species, not quite. The famous have mutated, amassed characteristics—refinements or corporeal variations—that allow their projected images, if not their bodies themselves, to dominate the rest of us. If...
© LitHub
Back to top