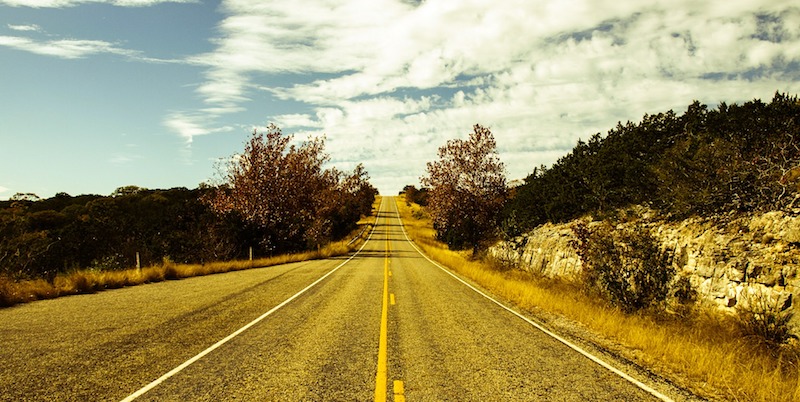 Andrea Bajani on Finding a Bit of Home Wherever You Can

Translated from the Italian by Elizabeth Harris

If it’s true we hold no memory of our first three years of life, then my son won’t remember any of this, in spite of living through it. Yet there will always be some trace left in his cerebral cortex, and so for the rest of his life, he’ll feel something pushing up from below, trying to be remembered, something pulsing beneath his memory, wanting to turn to memory, that he’ll experience instead as a sort of premonition. Which actually occurred between 2020 and this spring, between Italy and Texas, between two springs screaming of flowers and a promise of renewal that no one believed in anymore.

Among those first things he won’t remember: a framed map of Italy hanging in the kitchen near the stove, and his insistence, always brusque, that I hold him while I cook. The map and the pots, my spoon going from one saucepan to the other, these are my first attempts at creating a story of Italy for my son, in a kitchen in Texas. Food and geography, two simple devices, an Italian stereotype, like a packaged, frozen identity to slip into the microwave and feed to a hungry child.

The map I got from Paper Source, on Westheimer Road, wasn’t intended to be a map. It was the wrapping paper I was directed to as soon as they heard me say “Amore” into my phone. I was led to the display along one wall with paper of all kinds—floral, seascape, endless sky—and there was Italy, ready for wrapping. And so I wrapped: Italy held four boxes of tea candles and a Moleskine journal. Once home and presented to my wife, paper Italy went inside a frame.

And is still there—I see it as I write. At the time, a year ago, the ocean had just closed, had gone back to being a natural barrier. Uncrossable. The only way I could tell my son about Italy was to show him that map on the wall. I hadn’t realized, when I ironed Italy and slipped it inside the frame, that it was pre-war, this Italy I was presenting to my son. Trieste was still Austria; my country reached Venice, then came to an end. The Friuli region would only be annexed after the First World War. Never mind, I told myself, they look alike, still pretty much the same shape, and he can add on a region and a century when he’s older. And so he’d say “Italy” in that way of his, as I held him, and kilo by kilo he grew heavier, and I learned how to do everything with my right arm, the sauce, pasta al pomodoro, Italy served up on a plate.

Dante and Baudelaire have taught us that you knead the world with words, and it’s truly the world.

And meanwhile, Italy stayed across the ocean and on a laptop screen. Across the ocean, Italy was shut up at home, battling the virus. At 6 pm, it showed up on balconies, sang, then went back inside and waited for the virus to pass. Then time passed, and Italy stopped going out on the balcony, and stopped waiting too. In Houston, my son saw Italian people’s heads on the computer screen; he carried those heads around the house, like decapitated saints, pushing a wooden chair around with the laptop on it and those heads on the screen, calling his name. His two passports sat gathering dust in a pile of papers, and outside, Texas invited him to step into a story that was easier to handle. A neighbor, from her porch, seeing us on our walks—in various formations, family-of-three or, more often, father-pushing-stroller—gave us a onesie. Following proper pandemic protocols: she threw it from her front lawn, it landed on the sidewalk, and an hour later I sent her a photo of the baby dressed in a Texas flag, size 6-12 months. That photo is also something he won’t remember.

We were “the Europeans” because we walk, among only a few around here who do. Our son became the darling of Montrose, his bilingualism the attraction of the neighborhood, his mother’s English and his father’s Italian. On their porches, the neighbors watched us go by, like spectators cheering on the runners in a race but not allowed to assist them, to come any closer. Along the street, our son displayed his budding Babel. Italy began to appear on his lips, and he took to manipulating things not just with his hands but by wrapping them up in words. Dogs were American, but they barked in Italian. Cats, Italian. The moon, la luna, was Italian, and so were eating and sleeping. Clouds and trees, both Italian, and also the sun, il sole. Bears insisted on being English, as did owls, maybe because they were the mascot of Rice University, the reason we’re here.

His vocabulary grew with the names of poets that he hurled so stubbornly and precisely off our shelves: he’d say “Dante,” “Baudelaire,” “Brodsky,” “Neruda,” “Simic,” “Montale,” “Pinsky,” before grabbing them. Then he’d drop them onto the floor, a growing, muddled poetic monument that he’d inevitably fall into with a fleeting, desperate wail. And so these poets became words no different from “apple,” “cookies,” “eyes,” “nose,” “lion,” “sketti,” or “pizza.” He started to say them along with other things, Dante mixed with cookies, Montale in with the animals he dragged around the house, Merwin with a jaguar, an elephant, Snoopy. If we asked him what these people were doing in a pile on the floor, he’d say, “Poe,” meaning “poesia”—poetry.

When a one-year-old uses Dante and Brodsky as a language, as a bridge to speak to others, this is evidence that an open space exists between reality and the denial of reality (so strong in this pandemic era). And this space is for poetry, a fire fed by words, imagination fed by the alphabet. And it’s evidence, too, that we’ve accepted, allowed the virus to lay sole claim to the invisible, when in reality there was another invisible at hand, piled up now on our floor. And this was, and is, literature, which tells us that the invisible need only be given a language, be yoked to a story, and then the visible will be seen. The promise of Dante.

And this is why that mistaken map is still there in its frame, and it doesn’t matter if Trieste, inside that frame, is still a part of Austria, if in our kitchen, we’re still in 1916. And it doesn’t even really matter if Italy stays on the other side of the ocean for a while yet, reminding us that 9,000 kilometers is an infinitude of land and sea. Because Dante and Baudelaire have taught us that you knead the world with words, and it’s truly the world. The world we see with our hearts isn’t any more true or false than the world we see with our eyes. Brodsky is equal to an apple; Simic is as solid, as real as any cookie.

In this Italy we’ll reach today, we found out there are horses and prairie. Men wear cowboy hats, and pickups rumble down the road.

And this is why we’re now here, the car loaded up like it’s always loaded up, with a small human inside. It’s our son who’s taught us how to reach Italy, though for him Italy’s not much more than a sound his father makes and a mistaken map on a kitchen wall. Italy’s invisible, so you can get there. My wife’s sitting in the back with him, and she has an arsenal of games and books so time won’t turn this trip into the nightmare of a bored child.

Just a bit of patience now, a few stops, and then, eventually, Italy will come. We know it exists—we found it by accident on a different map. Three and half hours, northwest of Houston. You just take I-45, and keep on driving into the countryside. Up toward Dallas. We have three options, according to the navigator: the shortest route, skirting Waco, also takes the longest. So we’ll head up past Conroe, and the Sam Houston National Forest. When we see Buffalo, it means we’re almost to Italy, Texas. We looked at a few pictures before going. In this Italy we’ll reach today, we found out there are horses and prairie. Men wear cowboy hats, and pickups rumble down the road. Not much different from where we live, then, which is what poets teach us every day, in their writing.

We’re going there to take a picture. In this picture, there’ll be a father holding his child, under a sign leading into town. The sign will say, “Italy,” and my son and I will smile for the picture, or maybe not, it doesn’t matter, and the picture will be taken by an American mother who thinks it makes more sense not to be in it herself, so she can tease me. Then we’ll get back in the car and drive home. And that picture will become important. And among those things our son won’t remember, in the confusion of dream and premonition and what we call memory, there will also be this photo, and these words I’ve written down. And this will be evidence, still, that saying our name, every time, is like writing the first line of a detective novel made up only of clues. 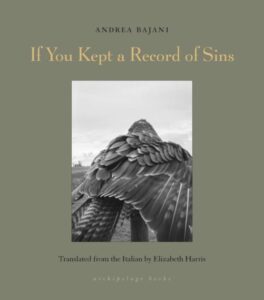 If You Kept a Record of Sins by Andrea Bajani, translated by Elizabeth Harris, is available via Archipelago Books.

Andrea Bajani is one of the most respected novelists of contemporary Italian literature. His novel, Ogni promessa (Every Promise), won the prestigious Bagutta Prize. Se consideri le colpe (If You Kept a Record of Sins) won the Super Mondello Prize, the Brancati Prize, the Recanati Prize, and the Lo Straniero Prize. His latest novel, Un bene al mondo, is currently being turned into a film. Bajani is also a journalist, and he published his first book of poetry, Promemoria, in 2017. He teaches at Rice University in the Department of Classical and European studies.

Lidia Yuknavitch Wants You to Write a Triptych 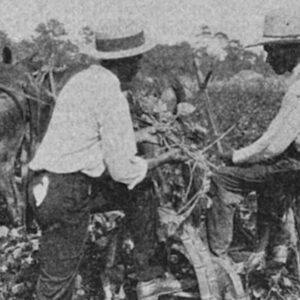 Drive east along Interstate 80 from San Francisco toward Sacramento, past vast acres of alfalfa, watermelon, and rice, and you’ll...
© LitHub
Back to top
Loading Comments...