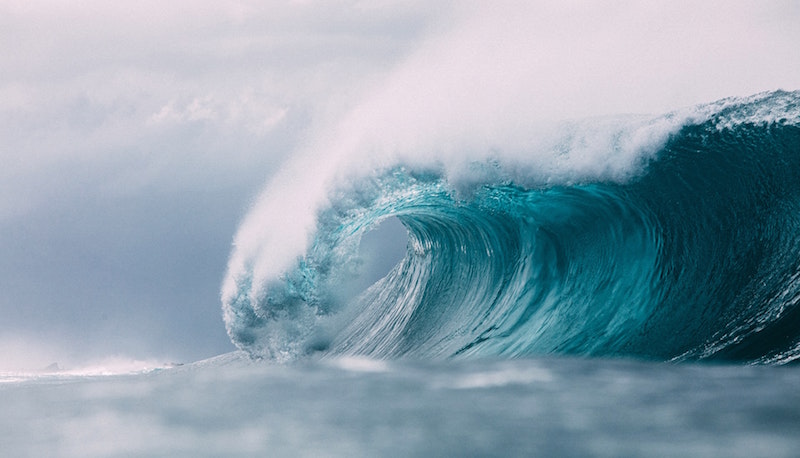 Surfing as Sacrament: Returning to New York’s Waves on September 12, 2001

Thad Ziolkowski on Grief and the Swell

The first hurricane of the season moves up the coast then swerves away. The swell is minor and the winds are howling, but I drive “down the shore,” as they say in New Jersey, curious to see how a certain spot is reacting and just to stand close to the storm energy.

The sky streams with bands of low white clouds, the underbellies dark with rain. The guard huts at the entrance to the state park are vacant, the road leading to the parking lot, the parking lot itself. Scrub, rugosa rose, poison ivy, slab concrete restrooms, clumps of dried seaweed like snarled cassette tape tumbling past on the sand.

The ocean is gray-green, whitecaps flashing beneath a dark strip of sky at the horizon and the waves have a mad, tossing character, like open-sea chop. When they form up into something possibly surfable, the wind snatches at the whitewater and spews it into the air as through a blowhole.

I walk to the water’s edge and sink past my ankles in swampy, high-tide sand. To the north is the lower Manhattan skyline, clearly visible even in this watery light. A photograph was taken more or less where I’m standing. Along the bottom is a black band on which is typed in white letters:

In the foreground, a scattering of seven or eight surfers in various relations to a wave—sitting up on their boards just past it, recovering from having been caught inside by it, paddling over it, turning away having failed to catch it. In the background, as in a vast diorama, the smoke rising from the towers looks like a monstrous gray tornado dropped down to feed upon them.

No one saw it coming is the story of that morning, but surfers had been eagerly expecting the arrival of this swell. Erin, the hurricane that spawned it, never threatened to make landfall and was mentioned by newscasters only in passing if at all. But it had come churning up the East Coast at such a leisurely, generative pace and the winds of a cold front set to groom it were so favorable that it was looking to be the best swell in a decade, albeit typically short-lived— just a day really, a feast with leftovers.

People were in the water at first light to catch the swell at its peak. I would have been, too, but I wanted to surf with my friend J., who had to drop his daughter at daycare at eight-thirty. I was on the faculty of a college in Brooklyn, and the one advantage of going so late was that I could leave a message on the voicemail of the English Department at a plausible hour of the morning: I’m afraid I need to cancel class today—not feeling well. Please put a note on the door of the room.

People find it strange or worse that I went surfing the day after 9/11, but for me it was like going to church—like psychic medicine, like sacrament.

It was a call I made at least once every fall, but this year was different: I had just been named director of the writing program and today was the first day of classes. I certainly wanted to make a solid directorial debut, to justify the faith placed in me by my dean. Still, a class could be made up. A once-in-a-decade swell is a kind of evanescent natural wonder. When I pictured my freshmen reading the note on the door and turning away in disappointment, I felt a pang. But I was going surfing anyway. I could not not go. Along with being named director, I had been given the keys to a faculty house on campus. At a front window I stared down the street in the direction J. would be arriving from. The weather was almost painfully beautiful. Students streamed past two and three abreast, faculty and administrators were pulling into the main parking lot. Living on campus meant you were often on view; there was no clear separation between work and nonwork.

When J. pulled up, I would have to ford this river of students with my board under my arm. Nothing says I’m ditching work quite like strapping a surfboard to the racks of a car in the morning. Would someone notice, would word get around? I was half listening to the local public radio station. An announcement came over the air of an incident of some kind, then the signal went out. My wife, Juliana, found the station on AM. A witness was reporting having seen a plane fly low across the city and then into one of the World Trade Center towers. I imagined a Cessna. We turned on the TV to an image of one of the towers with gray smoke pouring from a gash high up, like a fatal head wound.

I had worked in the World Trade Center, on the eighty-second floor, teaching English to Japanese businessmen.

I’d had to change elevators on the way up, as in a subway. I could remember the sunlight coming in through the narrow windows, the queasy sensation as the whole thing flexed and swayed in a high wind.

The phone rang. It was J. He had noticed smoke in the sky after dropping his daughter off. When he got back to his house to get his board, he went up to his attic and opened the roof hatch and saw a long streak of black smoke with bits of white in it—paper, he realized. It led all the way back to the tower. Then he sat down and wept for all the people who must be dying. He was weeping as he told me.

Then the second plane hit.

Classes were canceled. I walked over to the classroom and told my students in person, as if I had had every intention of being there on time to teach. Some of them went up onto the roofs of campus buildings—you could see Manhattan from there—and we heard their screams and shouts as first one then the other tower collapsed.

The next day I drove out to Long Beach in the car we had just bought when we moved to Brooklyn. People find it strange or worse that I went surfing the day after 9/11, but for me it was like going to church—like psychic medicine, like sacrament. I was thinking about surfers who had called in sick to their jobs at Cantor Fitzgerald and lived— the mystery of who lived and who died.

Having always ridden shotgun in J.’s car, I had never paid close attention to the route and wound up on one of the ring roads of JFK airport. When I realized my mistake, I made a U-turn in front of some kind of security booth. To the plainclothes cops staking it out, this sudden about-face looked highly suspicious and they sprang from hiding shouting and waving me down, four or five of them in sweatshirts and jeans and sneakers, peering in through the windows of the car. Where was I going, why had I turned around when I saw them,

“I got lost,” I said helplessly, gesturing at my board where it lay in the back. “I’m just trying to go surfing.” 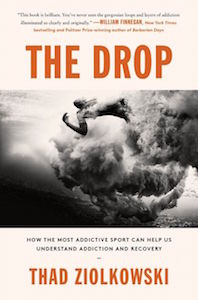 Thad Ziolkowski is the author of the memoir On a Wave, which was a finalist for the PEN/Martha Albrand Award in 2003, and Wichita, a novel. His essays and reviews have appeared in The New York Times, Slate, Bookforum, Artforum, Travel & Leisure and Interview Magazine. He has a PhD in English Literature from Yale University and is the recipient of a Guggenheim Fellowship. He is the Associate Director of the Leon Levy Center for Biography at the Graduate Center, CUNY. The Drop is his latest book.

How Anthony Comstock, Enemy to Women of the Gilded Age, Attempted to Ban Contraception 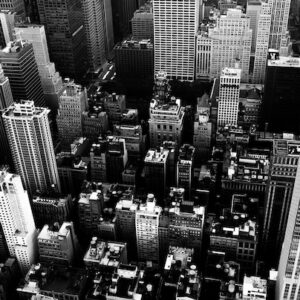