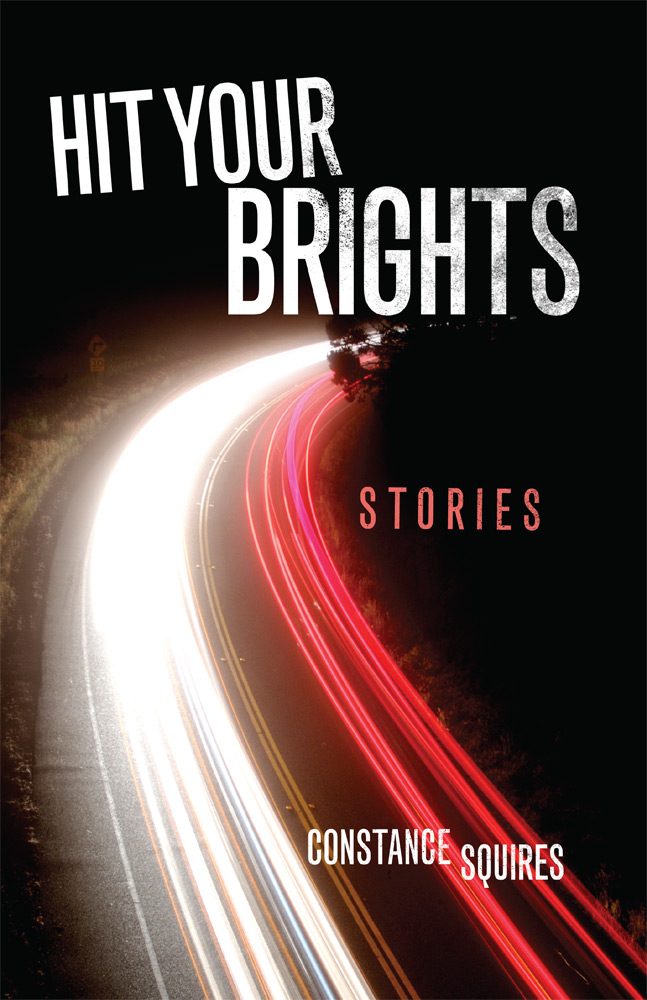 The following is from Constance Squires's collection, Hit Your Brights. Squires is the author of Along the Watchtower: A Novel. Her numerous short stories have appeared in Guernica, Shenandoah, Atlantic Monthly, and other magazines. She teaches creative writing at the University of Central Oklahoma.

On September 11, 2001, Bob Dylan released Love and Theft, his thirty- first studio album. On the twelfth song, my song, he sings, “Look up, look up—seek your maker—’fore Gabriel blows his horn.” I know he’s talking to me, so I look up.

I see a giant walking down a highway in Mississippi. He is a hitchhiker. He might be a king. He is working his way to me. The words he has written come to him as music and follow behind him on the air like an invisible cape that floats from his shoulders. He’s not sure they’re his, these songs, once they’re alight in the world, but they came from him, he does remember, the way a spider remembers spinning an egg sack.

He’s inside one of them now, a song grown spacious as the black between stars. All of his creatures are there. They are full of roads, are his songs, arterial branching routes of tongues and vines and perpetual reaching after other roads and other songs, songs about someone doable and edible and lovable and credible. He is working his way to me. Where am I? I am at the end, where the needle hits the label and starts to bounce. Love and Theft says the label, like those are the only two things in the world, a duality that needs no explaining.

But first the road, where his creatures run up to him like children to Santa Claus. Tweedledum and Tweedledee stop throwing knives into the trees long enough to pant alongside. Neither one gonna turn and run. “The Master’s voice is calling me,” says one to the other but the Master hasn’t said a word, only smiles beneath his white Stetson as their fat little legs give out and he pushes on through Mississippi past picnics and weddings, hot summer days full of hundreds of demons that are but iridescent bubbles blown across a summer’s green lawn and that blink out one by one on the warm air.

The giant is a small man with a pencil mustache like a cartoon villain, and he’s driving the flats in a Cadillac now, eight carburetors and using them all as he roars out of Mississippi north and west, down boulevards of cypress trees from the heat into the damp. He made it to Kansas City, Twelfth Street and Vine, but I wasn’t where I said I’d meet him. When we finally hook up, I see his wizened profile against the yellow streetlights and knock on his car window, saying, “Somebody’s got to decide where to go next. It’s tough out here.” I float like a mermaid in oily water at an intersection with a church on one corner where he had preached peace and harmony and a police station on another. I want to treat him kind, to be the one to paddle the car to high ground, to let the worn-out star rest, though there’s high water everywhere.

He wonders aloud, in a voice that doesn’t often admit to doubts, why he made this world. He remembers hot coffee and Mozambique, more hospitable environments, but even those were stories. He thinks how nice it would be to be the sort of person who just lives in the day, lives in his physical environment, knife and fork and car and cable, how that person would feel time like the body of a snake slithering past him, straight and unimpeachable, and would know himself like a sure thing. It was never so with him—when you’re a storyteller, you’re in the stories as much as the stories are in you, and time is like an electron cloud suspended in the air around you, past, present, and future all at once and all reachable. And that’s a pain in the ass. That’s hard. I know. Because reality and the stories intersect and you have to figure out sometimes—is this a story? Or is this real? If I act like this is real, will I look crazy? I can write you poems, make a strong man lose his mind, but can I tell the difference from the outside and the inside of a story? He thinks about these things as he travels. He travels through a world of people he made, but it is the loneliest world.

Restless sleep takes him into the Palace of Gloom under 800-thread-count sheets of Egyptian linen, or into cheap motels with swimming pools outside the rooms casting blue shimmer across the smoke-stained walls and witless, careful art: barn and hay bale, sea and coastline, snow-capped mountain and Alpine cottage. He walks up to hobo camps, shares a bottle, and lies down among his new friends on the hard ground. His feet are always cold, he pinches his nose for warmth; he kicks off the covers when it’s hot and sleeps on hilltops for the breeze. It doesn’t matter, his mind flies out when he sleeps and that is when his pity is most fierce. “Poor boy,” he mutters in his sleep. “Things will be alright by and by.” So gentle, but I know what he’s capable of, and so I ask: Isn’t pity just hatred without the respect? You have to decide with him—it is always something you have to decide.

Maybe empathy is the better word. He empathizes and wakes with images that disappear like writing on a fogged mirror. So he writes them down. Corny vaudeville jokes, sometimes—calling room service to order up a room. Naked and heading into the woods, he’s hunting bare. Get it? Bare? He laughs the laugh of someone who has left home with plenty of money and never expects to return. His laugh extends to the horizon and everything inside it is part of him, free game in his own rage for order, at least until this day in early September. Fuel, fodder, all of it flammable on this day. But someone else lights the world on fire. It happens in New York and D.C. and in the skies over Pennsylvania. Not him. He just wrote the soundtrack, the last word of the sunset.

Stalking over yellow fields, trailer parks, and the kind of small towns with bells that still toll, he carries two songs separate, old songs on their own black-and-red CD. They’re old songs, some of his oldest. “I Was Young When I Left Home” and “The Times They Are A-Changin’.”

“Yes,” I tell him, “both of those things are true, you know.” I visit him in different guises, I fill his tank, his coffee cup, swipe his credit card, trim his moustache. “What do you mean,” I ask, “holding those songs separate like that? Their own CD? To show you how far you’ve come?

How good you were and still are? Or, I know, maybe how the more things change the more they stay the same?”

He won’t answer and, I tell you, those old songs fill me with jealousy like what the youngest child feels for the eldest. Why wasn’t I there back then, before the family legends were legends and were instead just what happened today? You could say he was warming up for insulting me way back with “Idiot Wind.” Me with my lack of brains, according to him. I don’t think so, though. Sugar Baby is Sugar Baby, my own diminished thing, the lady born on 9/11. There were ever the great women, Queen Jane, Isis, the Girl from the North Country, but he’s working his way to me and I suffer from the comparison. Like it’s my fault he’s old and can’t believe. Like it’s my fault the world is on fire. I don’t like his attitude, you want the truth. I don’t care for it, but here he comes and I guess we’ll just see.

“But I am down the road,” I say. “I am the down of the road, your destination. I’m the last song, the last sound on the album. Don’t you remember your own album?”

He tells me I ain’t got no sense, but I say, “Whose story is this? You’re in my story now.”

He’s a giant in a white Stetson, his shadow falls across my face. He says, “You went years without me, might as well keep going now.” So I will, and he will, too, heading down a darkened street under falling ash to what comes next.

“Sugar Baby” from Hit Your Brights. Used with permission of University of Oklahoma Press. Copyright © 2019 by Constance Squires. This story first appeared in Rolling Stone 500.

"Duty," A Poem by Sarah Gambito 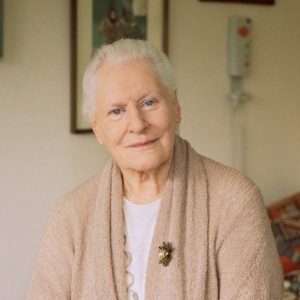 Diana Athill's Reflections on Aging and Life Diana Athill died Wednesday at the age of 101. Athill was lauded for her work as an editor, working with a wide range of writers...
© LitHub
Back to top