Nikesh Shukla on the Legacy of Stan Lee

“Anyone can win a fight when the odds are easy. It’s when the going gets tough, that’s when it counts…” says Peter Parker as he tries to free himself from some rubble. It’s here, in Amazing Spider-Man #33, co-issued by Steve Ditko and Stan Lee, where he discovers who he really is. So far, in the first 30 issues of the comic, we’ve seen Spider-Man flounder, fight, fuck up and most importantly, be held back by his own lack of self-belief. Then, in the three issue arc “If This Be My Destiny,” where he faces off against Doc Ock, who drops a building on him, he finds himself.

Much has been said in the past about Stan Lee’s inability to share the limelight with his co-creators, but this issue is where Lee and Ditko were at their best. Ditko, unbelievable at conveying the emotions of a teenager who is at his lowest ebb, desperate to reach a serum that could save his beloved aunt’s life, gave so much weight to his face despite it being masked; and Lee, ever the cheeseball gets away with being a cheeseball, with the zippy bathetic dialogue that would turn Spider-Man from a troubled teenager into a true hero. It was perfection. So perfect that Marvel Studios’ recent Spider-Man: Homecoming paid homage to this scene, almost beat for beat, panel for panel.

I prefer to remember Stan Lee at his best, because at his best, he created comic book characters who changed the face of culture. He co-created superhumans with special powers and put the weight of the world on their shoulders. He looked at the world and created comic book allegories to help us understand who we were as humans, what separated us and what brought us together. He understood what it was to be racked with self-doubt, imposter syndrome, other-ness or guilt, and he filtered it through the lens of the most powerful people on the planet. He was the antithesis to the original American hero, the strong silent type, like Shane or Superman. He wrote with humor and pace and pizazz. He wrote for me.

I was that shy quiet kid who read comic books at the back of the store, where the owners couldn’t see me, couldn’t get annoyed I wasn’t buying—I tore through those Spider-Man issues, those Uncanny X-Men issues. Me and Junaid and Riaz. When we did have money, we’d make sure to pick up different things so we could swap them.

This was a long time ago, when we were loathe to admit we were into superheroes. Before superheroes exhausted our imaginations by razing entire civilisations on our screens, only to follow it all up with a world-weary quip. I sometimes feel a disconnect between the Marvel Cinematic Universe and Stan Lee’s characters, because those characters felt every death, each innocent life lost weighed heavy on their souls.

I felt his death hard this week. Years ago, mere hours after my ba died, so too did Amy Winehouse, and while I was grieving and distracting myself by scrolling on Twitter, I started to get annoyed by what I felt was performative grief. Here were these people upset about a celebrity dying when I had someone I actually knew pass away. It made me angry. It took me years to appreciate that art, culture, books, songs, films, all of them can make us feel seen, more so than family members sometimes. I understood that when Phife Dawg from A Tribe Called Quest died. I felt that when Stan Lee died.

Because I wouldn’t be a writer if I hadn’t read comics. And I read comics because I was Peter Parker, because I understood the frailties of the X-Men, because like Bruce Banner I occasionally lost control of my inner-demons… (I never felt anything for Tony Stark, fyi, but who did?) I read those comics obsessively, and before long, I was writing my own Spider-Man arcs, in the hope that the dream job would land on my desk: storyline by Nikesh Shukla. And when Marvel didn’t come knocking, I invented my own hero. He was called Cat Man and he had the proportionate strength, speed and personality of a cat.

Two camps on social media tend to surface when a legend dies: the sudden obsessives, who remember the rare Japanese import only b-sides, and the naysayers, ready to remind us all how problematic the legend was. It’s been no different in the case of Stan Lee. He wasn’t perfect. He revelled in his own legend. He took credit for other people’s work. He definitely said some stupid stuff about the depiction of women and people of color in his books. None of these things stop being true in death.

But the impact he had on the world is undeniable. He helped changed the face of popular culture for the better, for the more humane. And impact his characters had on me feels just as huge. He let me feel like I belonged: at first, to a secret tribe of geek comic book readers, and now, to a sort of mainstream, I guess. I am nothing without Spider-Man.

As Stan Lee says to Peter Parker, in the woeful Spider-Man 3, “it’s true that one man CAN change the world.”

Nikesh Shukla is the author of Coconut Unlimited, editor of the essay collection The Good Immigrant, and, with Kieran Yates, a non-fiction essay about the 2011 riots called Generation Vexed: What the Riots Don't Tell Us About Our Nation's Youth. He hosts The Subaltern podcast, about writing. 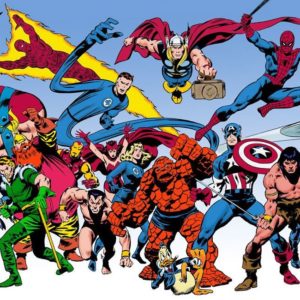 For better or worse, we live in Stan Lee’s America, and not just because the comic book characters he co-created have been...
© LitHub
Back to top