South Park and the Dark Comedy of Our Deepest Fears

The year I discovered South Park—1998, when I was 14—was also the year I sprouted C-cups. It was a time of inscrutable dirty looks from authority figures and disconcerting leers from middle-aged men, consistent in their capacity to make me feel as if I’d done something horrendously wrong. After a portly, creepily taciturn Charles Bronson type, easily over 50, tried to peek down my top in a Super America gas station, I spent an entire semester wearing extreme-compression sports bras and folding my arms strategically across my chest.

I had been assured by sitcoms, Kotex commercials, and YM Magazine that my adolescence would be a blossoming (because it’s impossible to discuss womanhood without colliding into a shitty botanical metaphor). But 1998 was the year I was devoured by my own body. It had rendered me hyper-visible while my sense of self faded into ghosthood. No one saw who I actually was anymore, if anyone ever truly had.

I found myself attracted to humor that was both funny and slightly disturbing—jokes with an edge that cut beyond politeness. I couldn’t quite explain why. Perhaps it was my unacknowledged anger, the grief I did not yet know as grief, that made me find Barney’s miserable alcoholism on The Simpsons humorous (him crawling on hands and knees in the bathroom of Moe’s, singing “Tura Lura Lural” comes to mind) or both laugh and gasp at Norm Macdonald’s salvo of knife-sharp O.J. Simpson jokes on “Weekend Update” (sample gag: “In Brentwood, O.J. was seen manning a lemonade stand with his daughter. Asked by reporters why sales were so poor, O.J. replied, “Beats me,” and went back to cutting lemons with a giant knife”). So it was natural that I would come across South Park, sooner or later, and decide to give it a shot.

South Park’s bent toward darkness hadn’t quite reached its fruition in 1998, but I liked it for what it was. It was loud and irreverent, offering something I had never before seen in depictions of childhood: kids calling one other assmaster and dildo and kicking each other across the room. This organic vulgarity was innovative in the saccharine, pre-Starr Report 1990s, when television still retained the canned quality of obscenity-free, Standards and Practices-approved drivel that had defined it at its inception, with a sentimentality that, today, seems gag-inducingly excessive (sitcoms being prime offenders, but the tone carried over into film—watch Forest Gump lately? You’ll puke sugar. And it won Oscars).

The show’s target audience was undeniably male. Those commercials for Nintendo 64 and Foot Locker during the breaks weren’t gunning for my allowance money. I took pains to not discuss the show with peers, lest I ruin my private illusion that the show belonged to me—ignoring the guy in the Korn shirt on the bus who did the world’s shoddiest Cartman impression, the middle-school boys, delicate wrists dangling from their Starter jackets, singing a falsetto “Uncle Fucker.” Girls maybe giggled or rolled their eyes, but they rarely joined in. A certain construct was at work: Men, taught to embrace and express anger, held a jurisdiction over dark humor. Women, who are taught to stifle anger—which would render them, at best, unpalatable, and worst, an aberration worthy of punishment—had no place in the discussion. Dark humor and anger alike belong to a body of traits that, for women, are not public domain, but a private universe. We may have access to it, but only in secret.

Twenty years later, watching South Park provides a different kind of release. The latest season’s main plot arc follows the presidential run of schoolteacher Mr. Garrison, an orange-faced Trumpalike with the campaign slogan “Fuck them all to death.” Terrified when polls reveal the increasing likelihood of his victory, Garrison attempts to sabotage his chances by making the most ridiculously offensive comments he can imagine, targeting his female supporters. Collar unbuttoned and chain-smoking in the style of Bill Hicks, he rants about putting his finger “in some chick’s ass.” When women begin to walk out of his rally, he calls after them, “Did I offend you? ‘Cause you’ve been okay with ‘fuck all the immigrants’… but ‘finger in the ass’ did it for you? Cool. Just wanted to see where your line was.”

In The Gift of Fear—a New York Times bestselling ledger on violence, safety, and instinct—author and security specialist Gavin de Becker argues that dark humor is often used to both conceal and signify feelings of endangerment. Through the protective guise of a joke, we can voice the hidden fears or suspicions that might subject us to ridicule if suggested earnestly. South Park’s entire 20th

season is a dark, predictive gag exploding over and over, an absurd envisioning of the worst-case scenario. Six out of the season’s ten episodes aired prior to the November 8 election. That Mr. Garrison’s real-life counterpart garnered 41 percent of the female vote—a percentage overwhelmingly dominated by white women—after launching the term “pussy” into network news-level parlance and weathering multiple reports of sexual assault and casual misogyny would be almost laughable if not for its chilling implications.

1998 South Park was built singularly to entertain and amuse. 2016 South Park, however, functions as both escapism and deeper commentary, begging the viewer to look closer at the reality embedded in its jokes. Aside from the rise of President Garrison, the season follows the growth of one of the show’s central adult characters into an online troll, wreaking international havoc as he drinks red wine and listens to Boston in his study, and includes a plotline detailing the rise of the “memberberry,” an addictive fruit that induces its consumer into a drugged sense of false nostalgia: ‘Member when America was great?

When I started watching the 20th season, I found distraction and pleasure at a time when I needed both. Presenting the unimaginable things I saw on the news as imagined made them seem more palatable. However, as November loomed ever closer, these jokes became deadly serious. This election confirmed my teenage fears about becoming a woman: That our anger doesn’t matter, that our only choice is to internalize it and submit to violation with silence. But I arrived at adulthood with the ability to name this anger, and with a sense of self-agency. Over the next four years, I can only imagine how invaluable that will be.

Kayla Rae Whitaker was born and raised in Kentucky. She is a graduate of the University of Kentucky and of New York University’s MFA program, which she attended as a Jack Kent Cooke Graduate Scholar. She lives in Louisville. The Animators is her first novel.

Novelist Nadifa Mohamed on the Impact of Trump's Muslim Ban 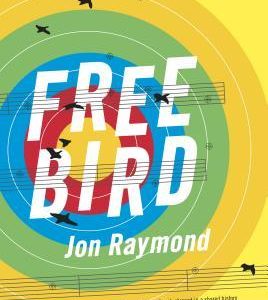 Loading the dishwasher, Anne pondered the many methods of skinning Mark Harris’s cat. There were many skinning strategies...
© LitHub
Back to top