So You’ve Decided to Write: How the Hell Do You Get Paid?

Once Upon a Time, Writers Made Five Dollars a Word

Some writers brag about being bad at business as if that elevates their writing careers to an admirable level of idealism. It doesn’t. The best writers all have business plans and are usually the best negotiators, especially when it comes to leveraging where they stand among other writers. Why wouldn’t they be—they have the throw weight, the leverage.

When Arnold Gingrich was 30 years old and launching Esquire, he approached Ernest Hemingway in a New York City bookstore that dealt in first editions. It was 1933 and Gingrich had arrived to pick up a copy of Hemingway’s Three Stories and Ten Poems—one of 350 copies printed in Paris ten years earlier. Hemingway was just leaving when Gingrich came in, and the young editor went right at him, reminding Hemingway that he was a collector of his work (they had been corresponding in this regard for some months) and beseeching him to contribute to the new magazine.

Hemingway agreed to Gingrich’s suggestion that he write “some kind of sporting letter” covering his outdoor activities in the course of his travels. When it came to payment, Gingrich said that he hoped to “make up in promptness of payment what it would lack in size” but that he was going to be forced to start rather low, even if it was “as much as I could to start and going up as fast as we make it, if we make it.”

“I don’t care how much you pay,” Hemingway told him, then reconsidered immediately. “Hell, yes, I do care, but the big stuff I can always get by selling stories and you and I are just talking about journalism. Let’s say if you pay 50 bucks or whatever you pay, you pay me double.”

Gingrich said he was planning to pay $100.

“Fine,” said Hemingway. “That means I get 200, and if you find as you go along that you can do better than that, then I get that much more, too, only doubled, and right away, without making me sit up and beg for it.”

They shook hands. That was the only deal Hemingway ever had with Esquire, and as he conscientiously met deadlines over the next couple of years from wherever he happened to be, the magazine’s rate more than doubled. By the late spring of 1936, Hemingway was making $500 per contribution and enjoying his relationship with Gingrich. When he saw he couldn’t meet an upcoming deadline for his standard “Letter From . . .” Hemingway sent Gingrich a story he had been working on instead.

It was called “The Snows of Kilimanjaro,” and Gingrich paid Hemingway $1,000, double his standard “double rate.” It was the most the magazine had paid for any single contribution up to that time, and as Gingrich pointed out in his memoir Nothing but People, it was less than a fourth of what big magazines like the Saturday Evening Post were paying Hemingway for stories.

Writers who hear this story are struck by the haphazardness by which that great story came to Esquire, not to mention the deal-making eccentricities of its author and the charming opportunism of editor Gingrich. More interesting to me when I was editing Esquire was Hemingway’s willingness to do the work offered by Gingrich for much less because they were “just talking about journalism.” That’s changed, of course, but what hasn’t is that no writer wants to feel stupid about their fees now that the life of a freelancer is problematic at best and impossible for many because word rates have dropped like rocks in draining ponds.

“The best writers all have business plans and are usually the best negotiators.”

When I was assigning my ass off, paying a standard three dollars per-word was no problem at Rolling Stone and Esquire, and there were many writers at Condé Nast magazines getting five or ten dollars per. Thirty years later, the dollar per-word that The New Yorker’s “Talk of the Town” pieces pay (both print and digital) makes young journalists almost giddy. (If you’re writing short fiction, I hope you’ve got a teaching job.)

The Freelancer, which defines itself as “guide to the gig economy” maintains a database of rates received by freelancers. The median flat rate for a freelance writing ranges between $176 and $200, while the median per-word rate stands somewhere between 76 cents and a dollar. Unsurprisingly, there were three times as many entries for flat rates as there were for per-word rates. BuzzFeed, for example, which is reported to carry a valuation of $1.5 billion and is expected to go public in 2018, paid $1,600 for a 5,000-word story with extensive reporting. You do the math.

At the same time, getting paid on time and having expenses reimbursed has always been difficult and frustrating, often harder than landing the assignment in the first place. It’s worse now, especially dealing with flailing legacy behemoths that string out freelance payment as a matter of policy. This is “the float” bankers talk about. The number of necessary approvals on a fixed timeline from the day the editor accepts the piece takes beyond six weeks at many magazines and websites. So the writer calls the editor, the editor calls accounting, which circles back with the news that the general manager or whomever has not signed off yet.

Agents can be useful but never want to be bothered with their 10 or 15 percent of what magazine pieces pay unless the piece is important to their client, which is usually true only if the client has nothing better going. When it comes to writing for the web the best book agents will tell you that the money is almost irrelevant, but they scramble to place pre-pub excerpts and strategically timed think pieces. This is smart.

What you don’t want to do is remove yourself from reporting and writing to promote yourself on social media, but that doesn’t mean you shouldn’t promote finished stories on various platforms. And when you do that, you should already have a metric of success in mind. That’s what your agent is talking about. Meredith Artley, editor-in-chief of CNN Digital, is effortlessly articulate about this and she is all over the web with wisdom about picking your shots.

If you’re a freelance journalist and don’t want to feel like an embed in a routed and retreating army you have to be opportunistic. It’s about survival. So, too, is writing an online column for little or no money just for the exposure so you can charge more for speaking engagements. Obviously the more famous you are the stronger your negotiating position. And at the same time, understanding how traffic formulas can be tied to compensation is also useful. That’s an over simplification, but you’re just looking for some throw weight, a little leverage, the kind Ernest had. 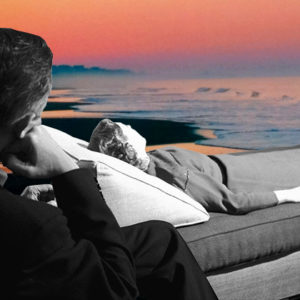 I hate August. The month marks the onset of the dreaded shrink drought as psychiatrists clear their appointment books and patients...
© LitHub
Back to top
Loading Comments...