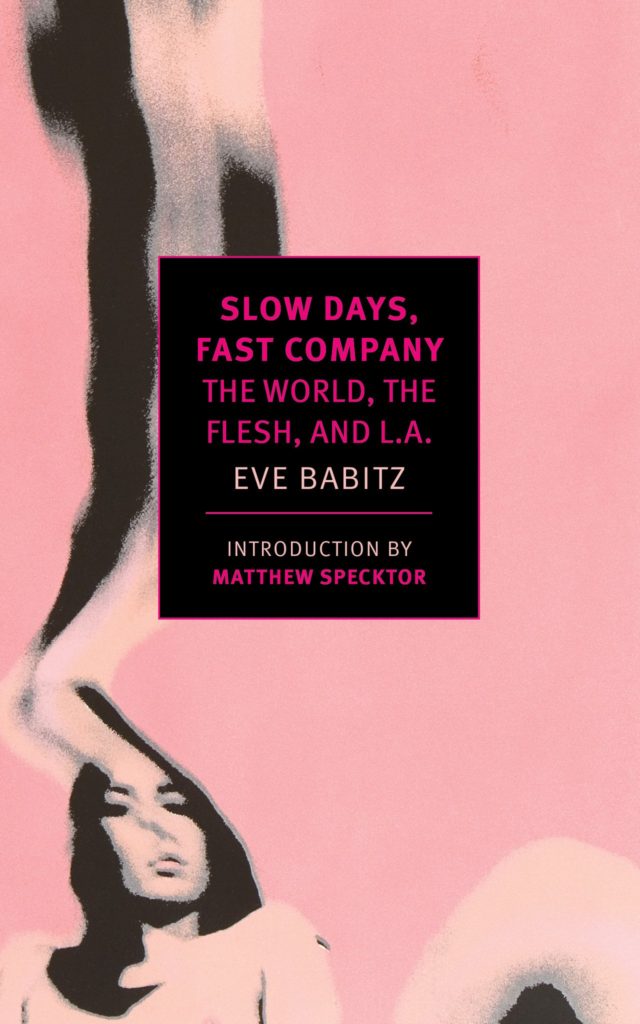 The following is from Eve Babitz’s novel, Slow Days, Fast Company. Babitz is the author of several books of fiction, including Sex and Rage: Advice to Young Ladies Eager for a Good Time, L.A. Woman, and Black Swans: Stories. She has written for publications including Ms. and Esquire and in the late 1960s designed album covers for the Byrds, Buffalo Springfield, and Linda Ronstadt. Her novel Eve’s Hollywood is published by NYRB Classics.

“Darling: I know you don’t care about the art of the novel but you might like the part about Forest Lawn.”

It’s well known that for something to be fiction it must move right along and not meander among the bushes gazing into the next county. Unfortunately, with L.A. it’s impossible. You can’t write a story about L.A. that doesn’t turn around in the middle or get lost. And since it’s the custom for people who “like” L.A. to embrace everything wholesale and wallow in Forest Lawn, all the stories you read make you wonder why the writer doesn’t just go ahead and jump, get it over with.

I love L.A. The only time I ever go to Forest Lawn is when someone dies. A kid from New York once said: “Look. Which would you rather? To spend eternity looking out over these pretty green hills or in some overcrowded ghetto cemetery next to the expressway in Queens?” L.A. didn’t invent eternity. Forest Lawn is just an example of eternity carried to its logical conclusion. I love L.A. because it does things like that.

People nowadays get upset at the idea of being in love with a city, especially Los Angeles. People think you should be in love with other people or your work or justice. I’ve been in love with people and ideas in several cities and learned that the lovers I’ve loved and the ideas I’ve embraced depended on where I was, how cold it was, and what I had to do to be able to stand it. It’s very easy to stand L.A., which is why it’s almost inevitable that all sorts of ideas get entertained, to say nothing of lovers. Logical sequence, however, gets lost in the shuffle. Art is supposed to uphold standards of organization and structure, but you can’t have those things in Southern California—people have tried. It’s difficult to be truly serious when you’re in a city that can’t even put up a skyscraper for fear the earth will start up one day and bring the whole thing down around everyone’s ears. And so the artists in Los Angeles just don’t have that burning eagerness people expect. And they’re just not serious. It makes friends of mine in New York pace and seethe just remembering the unreasoning delight one encounters with the cloudlike marvels of Larry Bell.

The idea of an “artistic community” evaporates into the slow days. Inspiration and words like that get hurried along with the fast company; it’s impossible to tell if one’s been inspired, or if it was the cocaine, or what. In an Italian café—where one day the incredibly beautiful young waitresses are going to poison (I hope) one by one all the vulgar and insulting men who’ve ever gotten away with murder and crude remarks—one night I saw on the wall, neatly, in black Magic Marker: “It ain’t Hollywood, my boy, it’s mescalito.” In Los Angeles it’s hard to tell if you’re dealing with the real true illusion or the false one.

The houses and architecture that originated in Los Angeles are entitled the “bungalow” style. I live in one. A bungalow.

People with sound educations and good backgrounds get very pissed off in L.A. “This is not a city,” they’ve always complained. “How dare you people call this place a city!” They’re right. Los Angeles isn’t a city. It’s a gigantic, sprawling, ongoing studio. Everything is off the record. People don’t have time to apologize for its not being a city when their civilized friends suspect them of losing track of the point.

When I was growing up, civilized friends of my parents’ and even my parents used to complain all the time about how the L.A. County Art Museum was a travesty unparalleled anywhere for dopiness. They’d really get angry each time they recalled how Stravinsky was never so much as nodded to by “the city.” I used to wonder, when I was little, how a city nodded to Stravinsky. City Hall was all the way downtown and Stravinsky lived in West Hollywood. These adults used to sigh and say, “If he lived anywhere else . . .

anywhere else, they would have done something about him. But not Los Angeles.” I think that the truth was that Stravinsky lived in L.A. because when you’re in your studio, you don’t have to be a finished product all the time or make formal pronouncements. Work and love—the two best things—flourish in studios. It’s when you have to go outside and define everything that they often disappear.

In the View section of the L.A. Times every now and then, you’ll read about some doctor or lawyer who says, “My wife, Shirley, and I have thought it over and we’ve decided to retire from success and try failure for a few years. We feel the variety will enlarge us.” I know L.A. is the only place on earth where people do that.

When the Ferus Gallery began exposing the rest of the country to Los Angeles art in the fifties, New York art people quickly observed that everyone seemed to be obsessed with perfection in L.A. The frames had to be perfect—the backs of the frames, even. “The Finish Fetish” it was called. Like the Beach Boys of that same mode when all that harmony fell out of the sky in seamless clouds. Rock and roll in L.A. tries even now not to be so gorgeous, to be raunchy and soulful, but it won’t work. Linda Ronstadt and The Eagles and Jackson Browne can’t scare anyone. Like the art from the old Ferus, L.A. rock and roll is just such perfection.

No one likes to be confronted with a bunch of disparate details that God only knows what they mean. I can’t get a thread to go through to the end and make a straightforward novel. I can’t keep everything in my lap, or stop rising flurries of sudden blind meaning. But perhaps if the details are all put together, a certain pulse and sense of place will emerge, and the integrity of empty space with occasional figures in the landscape can be understood at leisure and in full, no matter how fast the company.

I Love Soap Operas (And They Made Me a Better Writer) 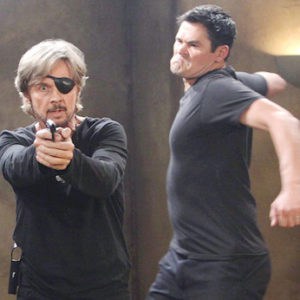 I Love Soap Operas (And They Made Me a Better Writer) As a writer who’d like to be taken seriously, I probably shouldn’t confess to loving soap operas. But I do. And I’ve...
© LitHub
Back to top