Shorter, Faster, Better: On the Beauty of Literary Compression

From John Cheever to Amy Hempel, Saying Much in Few Words

One of my mentors used to say this about the short story: the timer starts as soon as you read the first sentence. This was a scary thought—I didn’t (and don’t) like to feel rushed when drafting or reading. But it was only later when I realized what he meant: he was talking about momentum. A pace, a gait, particular to the short story.

Each writer finds her own idea of momentum. My own sense of it comes from a desire for density. The urge to pack a great deal into a small space. Compression. To pack, to squeeze, to fill to the brim. Some of my favorite practitioners of compression? Amy Hempel, Grace Paley, Eudora Welty. Compression not only means packing a lot in; it also means knowing what (and where) to cut. In a 2003 interview with The Paris Review, Amy Hempel writes about her transition from journalism to fiction.

But journalism taught me how to write a sentence that would make someone want to read the next one. You are trained to get rid of anything nonessential. You go in, you start writing your article, assuming a person’s going to stop reading the minute you give them a reason. So the trick is: don’t give them one. Frontload and cut out everything extraneous. That’s why I like short stories.

Getting rid of “anything nonessential” means the sentences that are there are left to carry more weight. I like to imagine each sentence carrying its own five-pound dumbbell.

This past spring, I taught my first graduate-level fiction workshop. I’d had the whole class planned out, but the night before the class would meet for the first time, I couldn’t sleep. I was suddenly nostalgic for the two pieces that I’d be teaching the next day, pieces that I might even be introducing to some of my students for the first time: 1) one of the first poems I’d ever read and 2) one of the first short stories I’d read: Robert Hayden’s “Those Winter Sundays,” and John Cheever’s “Reunion.” Both gave a jolt to my heart.

Sundays too my father got up early
And put his clothes on in the blueblack cold,
then with cracked hands that ached
from labor in the weekday weather made
banked fires blaze. No one ever thanked him.

And here are those first sentences of Cheever’s “Reunion.”

The last time I saw my father was in Grand Central Station. I was going from my grandmother’s in the Adirondacks to a cottage on the Cape that my mother had rented, and I wrote my father that I would be in New York for an hour and a half, and asked if we could have lunch together.

Of course, these are very different fathers. That lunch in “Reunion” becomes a terrible spiral, a series of aborted meals. My heart, as it leapt the first time, and as it leaps every time it reads that sentence, the first twelve words, was reacting/is reacting to compression. My reader-brain is overwhelmed by the ability of that first sentence to take a bulky emotional state with unbearably jagged edges and to squeeze it into so few words. In his poem “An Ordinary Evening in New Haven,” Wallace Stevens tells us that “the poem is the cry of its occasion,” and Cheever’s first sentence announces its occasion with such compression that the emotional pull feels effortless there.

Hayden’s poem tells its own short story, and the poem’s first line contains just as much emotional power as Cheever’s first sentence. My favorite word in Hayden’s first line is “too”—from this word alone, we know the speaker’s father gets up early every morning. This is the beauty of compression—it’s the difference between “My father got up early every morning, and he also did this on Sundays” and “Sundays too my father got up early.”

One of the things I love about the short story form is that we can take in a full story, with all it has to offer its reader—plot, characterization, dialogue, setting—in one sitting. This isn’t something that the novel allows (unless, of course, you’re a rare reader who reads a novel in one sitting). How stunning to our reader-brains—once you reach that last sentence, you may, if you like, immediately return to the first. We adore this particular pleasure the way we relish in eating an overwhelmingly dense meal in twenty minutes. For me, it’s the very same pleasure I have when reading a favorite poem.

Compression does not imply a certain length. I’d argue that Amy Hempel’s “San Francisco”—a short short story, only about a page long—is just as compressed as her longer short story, “In the Cemetery Where Al Jolson Is Buried.” No word is wasted. Each sentence has at least two reasons for existing on the page. The impatient reader—impatient for backstory, for full explanation and character motivation—will not be satisfied. Hempel is for the reader who is willing to embrace unknowns. When was the speaker’s friend in “In the Cemetery” diagnosed? How old was she? How did she feel when diagnosed? Does she have more friends? A love life? These are questions some fiction workshops would urge the story’s writer to answer and unpack. A poem’s power may rest in what is left unsaid; the fiction writer’s ability to embrace unknowns can be central to compression and its power. Hempel famously wrote “In the Cemetery” as an assignment in a class taught by Gordon Lish. From Hempel’s interview with The Paris Review:

Do you remember the first class?

Vividly. The assignment was to write our worst secret, the thing we would never live down, the thing that, as Gordon put it, “dismantles your own sense of yourself.” And everybody knew instantly what that thing, for them, was. We found out immediately that the stakes were very high, that we were expected to say something no one else had said, and to divulge much harder truths than we had ever told or ever thought to tell. No half-measures. He thought any of us could do it if we wanted it badly enough. And that, when I was starting out, was a great thing to hear from someone who would know.

What was, if you can say, your “worst secret”?

I failed my best friend when she was dying. It became the subject of the first story I wrote, “In the Cemetery Where Al Jolson Is Buried.”

But Hempel is selective in her telling of this secret in the story; what she keeps at bay is just as important as what she allows in. (Ah! Even her response to the Paris Review interviewer is compressed and careful: “I failed my best friend when she was dying.” Something so complex and ragged with emotion in a simple sentence.) The “negative space”—what Hempel does not include, what the speaker does not tell—defines the story as much as what she decides to include.

Compression means the writer is being selective; she’s being careful about what goes in and what stays out. She is making choices. Every detail is important. Every gesture. Every spoken word. Every image. What follows, of course, is a feeling of momentum. A tempo that overtakes us. Lines and sentences motoring forward as we try to keep up. The lines/sentences go—they happen—before our eyes. Momentum gives us the feeling that the thing—the poem, the story—is happening in front of us as we read.

We are through with the piece almost as soon as it begins. We want to go back to the start. What just happened here? Let us return. Return to the beginning. Return to the first line, the first sentence. We are nostalgic for the piece as soon as it is over. Nostalgia, from the Greek—nostos, “return home,” and algos, “pain, suffering.” In the reader’s case, the pain comes from the fact that we’re never able to return to the beginning completely; you may read the beginning that first time only once. Of course: compression means that the second, third, and nineteenth readings reveal more layers than we’d imagined.

Olivia Clare’s debut story collection, Disasters in the First World, is out now from Grove Atlantic.

Olivia Clare Friedman is the author of the story collection Disasters in the First World, the poetry collection The 26-Hour Day, and the novel Here Lies. Her fiction has appeared in The Paris Review, The O. Henry Prize Stories, Granta, McSweeney’s Quarterly Concern, among other publications. Raised in Baton Rouge, Louisiana, she teaches Creative Writing at the University of Southern Mississippi, where she holds the title of Nina Bell Suggs Endowed Professor.

David Graeber On Jeremy Corbyn, 'The Most Unlikely Leader Ever'

To Catch the Conscience of the President: On the Power of Theater 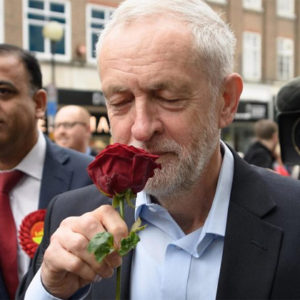 David Graeber On Jeremy Corbyn, 'The Most Unlikely Leader Ever'

London-based anthropologist David Graeber talks to Christopher Lydon about the recent UK elections and potential change to come....
© LitHub
Back to top