The Author of Days of Distraction Talks to Maris Kreizman

On this episode of Sheltering, Alexandra Chang talks to Maris Kreizman about her book, Days of Distraction, published on March 31. Alexandra talks about the act of fictionalizing your own life, the nuanced difficulties of being in an interracial relationship, and the luck of being quarantined with someone who loves to cook. Alexandra’s favorite local bookstore is Buffalo Street Books; please order through them if possible!

*
From the episode
Transcription generously provided by Eliza M. Smith

Maris Kreizman: Welcome to Sheltering. I am here with Alexandra Chang. It’s such a pleasure. Please introduce yourself and tell us how you’re doing.

Alexandra Chang: Hi. Thanks so much for having me, Maris. I’m Alexandra Chang, the author of this book, Days of Distraction. And I am doing OK, considering the situation, considering the global pandemic. I’m in upstate New York, so it’s pretty quiet. Staying indoors—except when I take the dog out, which is a welcome break.

Maris: It’s always good to have a little dog break.

Maris: And are you able to work, concentrate, that kind of thing? Are you reading?

Maris: Yeah, same. Same. Tell us a little about Days of Distraction.

Alexandra: So, it is a—I’d say like a coming-of-adulthood story told from the perspective of a Chinese American woman, who at the open is working as a technology journalist in San Francisco. And the novel tracks about a year and a half of her life as she moves across the country with her white boyfriend; he’s starting grad school in Ithaca, New York, and it sort of follows their road trip and then her life there. And, I guess on a broader level, it’s about the precarity of young adulthood, sort of the dynamics of being in an interracial relationship, and it’s also about work and family, and how that affects this person’s sense of self. And also, just sort of about a woman in her mid-twenties trying to find and figure out a sense of selfhood while all of these larger, unwieldy pressures—like, you know, racism, sexism, capitalism—are affecting her day-to-day life.

Maris: And racism and capitalism now—just, like, bigger and worse than before.

Alexandra: Yeah, yeah, I know. I was like, oh people will read while they’re in quarantine. But this book maybe is not a feel-good type of read.

Maris: No, but it’s still escapism. It’s still about a different time.

Alexandra: There’s no pandemic in it, so.

Maris: There’s no pandemic! And yeah, you cover the micro-aggressions really well, and the varieties of racism that you must encounter. “You” being, the narrator is a kind of version of you, yes?

Alexandra: Yeah, I would say that the narrator shares a lot of biographical details with my own life and, you know, the move that she makes across the country is a move that I made, also back in 2013. So, we do share a lot in common.

Maris: And you have a cat and a dog.

Alexandra: Yes, I have a cat and a dog, and there’s a moment in the book where the narrator gets a cat and a dog when she moves upstate. It’s probably one of the big plot moves of the book, getting a cat and a dog, as it was for my life too. So, yeah, we do share a lot in common, and I did draw a lot from my own life. But of course, in writing it and revising it, it became stylized and fictionalized and dramatized so that there are so many things that stray from my own life. A lot of times I think of the narrator as a more dramatic, more neurotic version of myself.

Maris: That makes sense. I also love how you intersperse the narrator’s trajectory with—is it primary sources?

Maris: You tell me.

Alexandra: There are a lot of primary sources, like you’re saying, from Chinese American history. Well, some are secondary sources, but a lot are articles written by Chinese American historical figures, or articles written about those people. One of the people who the narrator sort of becomes a little more obsessed with is this woman named Yamei Kin; she sort of becomes this prominent figure that the narrator compares herself with because Kin also, she was married to a white man, and she was working in the late 1800s—actually even mid-1800s. Now I’m showing my blank spots, how far away the book feels to me. Yeah, so a lot of that is interspersed in between the narrator’s story as she’s researching these historical figures.

Maris: And tell me about writing about a relationship that is close to yours, even though it’s a fictionalized version.

Alexandra: I think when I first started writing, it was easier because I was writing about a time period that was pretty distant for me. I mean, not extremely distant, but three, four years out, when I first started writing this. But I found that in revising, whenever I started revising these sections about the narrator and her boyfriend, who in the book goes by the initial J, I would start having some negative feelings toward my own now-husband, just cause I was so in the book. Especially when I was working on these sections where they have conflict. There’s a lot of—the narrator is trying to explore her own role in being in a relationship with a white man. And there are these moments where J doesn’t understand what the narrator is going through and can be flippant and almost have—just kind of flippant and ignorant and not fully understanding.

So, in working on those sections, yeah, I would sometimes find myself being like what am I doing? Why am I in this relationship too? And then I’d be like OK wait, this is the book right now, this is not my relationship. But of course, there are elements of it that I drew from my own relationship. And I think for me, it was important to sort of capture the nuance and, you know, the difficult parts of being a woman of color in a relationship with a white man. There are so many differences of perspective and experience.

Maris: In the book, the narrator constantly wants J to do the reading, like literally do the reading. We’ve seen these sources, we’ve seen what she’s been reading, and if he would just read the thing, maybe he would have some better understanding. Do you think your book could work as a way of helping clueless white men in relationships understand better?

Alexandra: I don’t know. Part of me—I don’t know, maybe, maybe it’s possible. I don’t think I was writing it with that in mind, or with that intention in mind. I think for me, I was sort of thinking like, oh this book is for people who are like me and who have been in these kinds of situations and just being like yeah, this is tough, and this sucks sometimes, and here are all these questions that I’ve had in relation to my own relationship. I don’t know that it would be able to be like a good guide necessarily for white men. But, you know, if that happens, then great!

Maris: Yeah. And you also used to report on the tech industry, yes?

Alexandra: Yes, yeah. I was a staff writer and editor at a few tech publications in San Francisco when I was in my early twenties, which feels like a totally different era.

Maris: Last week feels like a totally different era, so.

Maris: What were—you capture the absurdities of the tech industry very well in the book. What were some of the things that you had seen? Anything in particular?

Alexandra: Yeah. I mean, I think because this was—the book is set in the early 2010s, and I was straight—I was maybe a year or two out of college, and it was my first real job—so I had a lot of hope and idealism when it came to this great job that I have, that’s covering really important stuff that’s happening in the world, because technology affects everybody. But the tech journalism that I was—the field I was working in—was consumer tech, which was a lot about buying stuff and what gadgets are cool to have. And what are these companies putting out? Like this new software update, this new app. It did start to feel like, not totally meaningless, but a lot of the importance and meaning got sucked out of it for me.

And also, much like the tech industry, tech journalism has a problem with diversity and equity. There are not—there were not, when I was a tech journalist—very many women in the newsroom. There were even fewer people of color in the newsroom. So, there were like several moments when my coworkers said insensitive things, or systemically it was hard to be a woman of color who could move up when it feels like a boys’ club. But that’s something that happens in many, many industries, not just tech and tech journalism. So, I was also drawing from other experiences that I’ve had in predominantly white spaces and putting that into the book in that early section, and actually throughout.

Maris: Yeah, it’s throughout. Tell me a little bit about your tour, and what it was going to be and what you’re doing now instead.

Alexandra: But yeah, basically the entire tour was cancelled and now—now doing virtual things like this has been nice.  It’s been really heartening to see more things pop up online. But yeah, it’s weird, it’s very weird to publish a book during this time. It’s a little bit sad that I won’t be able to engage with audiences in person, at least not for a while.

Maris: And tell me where you are, do you have a local bookstore that you like?

Alexandra: Yeah, so I’m in Ithaca, New York. We have a really great bookstore here called Buffalo Street Books, and they had to close because, you know, it’s a non-essential business, but I just found out that they are now taking orders online and doing shipments. So, Buffalo Street Books.

Maris: That’s great. We will include that. And finally, very important question, what have you been eating during this quarantine situation?

Alexandra: I have been very lucky that my husband cooks and likes to cook. So, I’ve been eating a lot of the stuff he’s been making, like we ate lasagna—well, we ate lasagna for several days in a row.

Maris: Sure. That’s how lasagna works.

Alexandra: Yeah. He’s getting really into making bean dishes, so lots of beans and rice, but it feels somehow fancy to me even though it’s very simple. And lots of snacks and desserts. Like, he made some pistachio—now I’m just bragging about all of the things that he makes—but he made some pistachio shortbread cookies that I had this morning. They’re so good.

Maris: That’s so good. Well, thank you so much. And this will come out next week, as will your book. I hope to spread the word.

Alexandra: Thank you so much for having me on this.

Rekindled: Douglas Stuart on the Hope Inherent in Struggle 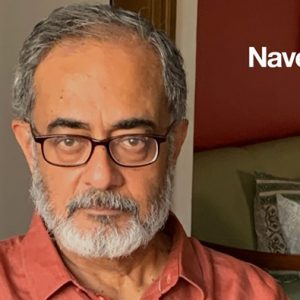