A Preview of The Festival Neue Literatur

The shortlist of contemporary German writers who have experienced substantial success in English translation—Schlink, Sebald, Süskind—points to the continued popularity of literature written by middle-aged white men. Even the 2009 Nobel Prize did not elevate Herta Müller to this trio’s level. Perhaps most striking, however, is that these men gained prominence in the 1980s and 90s and that no German iteration of Knausgaard, Ferrante, or Murakami has eclipsed them. Considering the unceasing popularity of Kafka and Mann, among many others long deceased, the lack of mass attention, critical or otherwise, toward new voices seems that much more surprising.

The Festival Neue Literatur, the first and only literary festival in America focused exclusively on German literature, hopes to correct this absence by introducing emerging writers, already well known along the Rhine and Danube, to a new audience. Since 2010, it has brought two authors each from Germany, Switzerland and Austria, many of whom have not been translated into English, to engage with two American authors over a series of free discussions, live interviews, and dramatic readings beginning this Friday, February 26th, through the 28th. Past participants include Melinda Nadj Abonji, Abbas Khider, Olga Grjasnowa, Francine Prose, Rivka Galchen, and Maja Haderlap. This year, the line-up features Xaver Bayer and Vea Kaiser (Austria), Iris Hanika and Christopher Kloeble (Germany), Sibylle Berg and Pedro Lenz (Switzerland), James Hannaham and Jenny Offill (USA).

Boutique in scale, the festival has a refreshingly manageable schedule of five events which take place in Manhattan and Brooklyn at venues that include Book Court, the Bowery Poetry Club, and the Deutsches Haus at NYU. This year’s theme, “Seriously Funny,” was chosen by the translator Ross Benjamin (Hölderlin’s Hyperion; Joseph Roth’s Job) and is in part a provocation against the stereotype that Germans care only for the serious and depressing. “The theme came to me first, and I have selected authors who are using humor in their work which, as a whole, is not necessarily very light,” Benjamin said in a phone interview. “We’re trying to have a broader conversation about humor in literature and the interdependence between it and seriousness.”

“I was frankly astonished when I first heard the theme—not for the stereotypical objection but because humor is one of the most difficult literary intentions to take abroad,” festival chair Monique Truong wrote to me. “Yet this year’s authors and their translators show not only how flexible, adaptive, and near-target literary translations can be, they are also a fantastic reminder that humor is a shared tonic, which is at its best when deliciously bitter.”

The participants represent a mix of genders, ages, and writing styles, but what runs through all their work, Benjamin says, “is the rejection of humor as merely toothless entertainment. There are many literary approaches to tackling humorously even those topics most often considered profoundly serious.” Such “lighthearted” subjects tackled by this year’s authors include the toxic world of druggies and dealers in Lenz’s Naw Much of a Talker (which brings to mind Irvine Welsh both in tone and in its translation from Swiss vernacular dialect into the Glaswegian which inspired it), Sibylle Berg’s Der Tag, als meine Frau einen Mann fand (The Day My Wife Found a Husband) which concerns the breakdown of a seemingly stable bourgeois marriage when a failing artist’s wife becomes addicted to sex with a man she meets while the couple vacations in the Tropics, and Xaver Bayer’s impressionistic sketches in Geheimnisvolles Knistern aus dem Zauberreich (Furtive Rustlings from the Magic Kingdom) that feature, among many nightmarish examples, a character’s casual and matter-of-fact report of being burned alive.

Two panels, both involving four of the participants, most closely touch on the festival’s theme. John Wray moderates a discussion entitled “Laughing Matters” which is inspired by the notion that any aspect of human experience that can be taken very seriously can also make us laugh, as is revealed in Christopher Kloeble’s Meistens alles sehr schnell (Mostly Everything Very Fast)—which involves incest, disability, and a child accidentally being responsible for its parents’ death—and Jenny Offill’s critically acclaimed 2013 novel Dept. of Speculation. The other discussion, “No Joke” moderated by Siri Hustvedt, has as its foundation an oft-quoted passage from Nietzsche’s Nachlass: “Perhaps I know best why man is the only animal that laughs: he alone suffers so excruciatingly that he was compelled to invent laughter. The unhappiest and most melancholy animal is, as might have been expect, the most cheerful.”

As three of the writers have not yet been translated into English, the Festival Reader (which is available for free online) will be of particular interest, as will the annual Sunday Literary Brunch. At the latter, all six German-language authors will read from their original texts followed by a group of actors who will interpret their work in translation. “It’s awesome to watch the faces of our authors as they hear the familiar becoming foreign and vice versa,” Truong wrote.

While FNL plays a significant role in serving as a platform to facilitate its writers’ entry into the American market, the festival’s main objective is challenging perceptions about German literature and advocating for its relevance in a country in which literature in translation still fails to entice a substantial readership. As Lauren Cerand, the festival’s publicist and frequent Literary Hub contributor, wrote on Facebook, “These writers may not be familiar names, and there’s value in that.”

Some additional thoughts about upcoming FNL events from notable participants past and present:

Siri Hustvedt, acclaimed essayist, novelist and public speaker: “All mammals play and some have forms of laughter, but it is unlikely that a chimp is capable of what I call funereal humor—the ability to find suffering and death funny. This requires a highly developed sense of reflective self consciousness, the ability to imagine ourselves as others might see us, to remove ourselves from ourselves. It requires distance. And in that reflective distance from the afflictions that visit all of us, misery may become ridiculous and when it does, we are relieved of the pain. The use of humor in the treatment of trauma patients is much discussed in the psychiatric literature, although inevitably in a decidedly unfunny way. In pleasant contrast, the  writers on the panel all have a refined gift for unleashing the comedy that hides in anguish. I fully expect the conversation on the 27th to elicit frequent smiles, some groans, many titters, and at least a couple of full blown guffaws.”

Susan Bernofsky, former curator of FNL and translator of the Jenny Erpenbeck’s The End of Days: “I’m particularly delighted to see that FNL is again putting on an event spotlighting the art of literary translation as part of the festival programming. Last year’s translation event (devised under the curatorship of Tess Lewis) was a huge success: standing-room-only turn-out and a great, lively conversation between translators and their editors. I’m expecting this year’s iteration to be even more exciting. I expect Daniel Kehlmann will be speaking in an elegiac mode, since his long-time translator and editor, Carol Brown Janeway, died last year. He admired her enormously and attributes at least part of his success in the English-speaking world to her unflagging support of his work.”

Charles Shafaieh is a writer and editor living in New York City. His work on literature, theater, film and art has appeared in The New Yorker, The New York Times Sunday Book Review, and The Times Literary Supplement, among other publications. 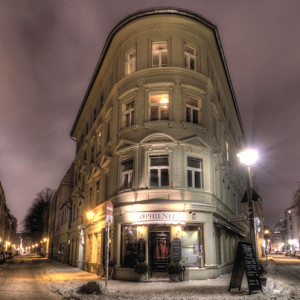 This weekend, the Neue Festival Literatur is offering a crash course in the best of contemporary German literature, with...
© LitHub
Back to top