In conversation with Bethanne Patrick

Buenos Aires-born Samanta Schweblin now lives in Berlin—but she writes rocket-pitched prose in her native tongue. Chosen as one of the 22 Best Writers in Spanish Under 35 by Granta Magazine, Schweblin has received the prestigious Juan Rolfo Story Prize among others, and her work has been translated into 20 languages.

That number will probably increase with Fever Dream, her first novel to be released in English. Otherworldly and nightmarish from its first page, the brief story is a dialogue between a woman named Amanda and a boy named David that takes place in a hospital. What is wrong with Amanda? Does David suffer from the same malady, or not? Why is there so much talk of worms?

Recently in The New Yorker, Jia Tolentino wrote that Fever Dream has “a design so enigmatic and so disciplined that the book feels as if it belongs to a new literary genre altogether.” Once you’ve read it, you’ll understand: Its succinct length and broad symbols create a sort of prose-poem that fits many interpretations without sacrificing readability.

I spoke to Schweblin from her Berlin apartment; some questions and answers were provided via email. She insisted in both media that her English isn’t very good, but although once or twice she paused to think of a word, I found her otherwise quite fluent. However, if she’s happy writing in Spanish and having the talented Megan McDowell work with her, I’ll take it. After being electrified by Fever Dream, I can’t wait to see what Samanta Schweblin writes next.

Samanta Schweblin: Really wintery! It has been snowing for three days and everything is completely white. It’s really nice. I love Berlin on days like this.

BP: Why did you move to Berlin?

SS: I had a one-year scholarship from the city government, which was wonderful and very generous, really. When it ended it was hard to come back to real life! However, I came to Germany with my boyfriend, who is also Argentinean, and while I was busy writing he did what you do when you’re unemployed: He opened a bar. It’s in Kreuzberg.

BP: Does the atmosphere in Berlin make it easier to produce art?

SS: It’s really different from Buenos Aires, in a logistical way. I love Buenos Aires, but when I came here I realized I could work less but have more time to write. Here I can give workshops three times a week, and that’s enough to support my writing.

BP: Tell me a little about your road to becoming a writer. What are your days like, now, as a working writer, if not a full-time writer?

SS: I always felt attracted to books and stories. I started to go to some literary workshops when I was around 17 years old and I haven’t stopped writing since then. In Argentina, half of the writers have their own workshops and they give them in their own houses. As a participant it was amazing to learn in the living room of my favorite writers, having access to their libraries and discover writing life from so close. Now, living in Berlin, two days a week, I give my own workshops in my own living room, continuing the tradition. It was a surprise to me how many people write fiction in Spanish in Germany, and take it so seriously! The rest of the week I am a full-time writer.

BP: Does the novel matter anymore? If so, how and to whom?

SS: Well, it matters a lot to me. I think TV series, games, and general media have changed the way we tell stories. But books will remain. Technology has changed all the others arts: painting, theater, dancing, cinema, music. But literature is an absolutely intimate process between the writer’s voice and the reader’s mind, it is something so natural and strong that the only thing that technology could change is its support, its format, for example, if we read from a book or from an e-reader. But that doesn’t change the heart of literature.

BP: Who should Americans read that we don’t?

SS: So many names cross my mind that it’s almost impossible to answer that question. I learned to write reading North American literature, I love your literature, but I have this feeling that if a country only reads it own literature, it will run out of oxygen. I know this year two more Argentinian writers will be translated into English: Leila Guerrero—an exquisite chronicler—and Mariana Enriquez’s short stories, whose creepy and horrific plots could wake you up in the middle of the night. A lot of things are happening with contemporary women writers in Latin America. Maybe that would be a great place to start.

BP: What novel do you wish you had written?

SS: Some days I would say The Third Man, by Flann O’Brien, and some days The Invention of Morel, by Adolfo Bioy Casares.

BP: Who do YOU read right now? Do you read fiction while you’re writing it, or do you read poetry/nonfiction?

SS: Friends and writers are my most reliable reading guides. I am always taking note of recommendations from people who seem interesting to me. Sometimes they are not writers and their favorite books are not fiction but big ideas could come from that.

BP: Speaking of big ideas: Your book, as many have noted, is not like much else. Was that deliberate? Were you trying to go for something different?

SS: It is difficult to answer, but I will try. For me, creating tension is one of the most important things in reading and writing. I need that tension as a reader [ed. note: more on that below] but I also really need it when I’m writing, or I can’t keep working on a book. When I start a book, from the first idea I really need to feel that the thing I am doing is really new—because if not, there is no way for me to get my own attention! (Laughs)

When I was a child and didn’t know yet how to write, I used to tell stories to my mom. I was five or six years old, and every night I told her stories. I remember discovering the sensation that I could really touch someone else with storytelling, and even better—if I came up with something really dramatic, it meant I could turn the story and get some attention and I loooooooved that attention. There aren’t many moments in life when another person wants to hear you, when you can capture that person’s attention completely. It’s an amazing feeling, and when I’m writing, I’m trying to go for that moment.

SS: I want to show this kind of power they hold, also that David has information that the rest of us don’t, meaning the reader as well as Amanda. He knows a lot about death, and in a place where people are dying from agrichemicals, the animals are dying too. David has this power to help the ones who are dying. He has this relationship with all the things in the world between life and death—all the things that are in a kind of purgatory.

BP: I’m a parent, and I loved the idea of the “rescue distance,” the pull that Amanda says she feels whenever her daughter is away from her.

SS: I tried to give a subtle meaning, really subtle, about this idea that if there is an end of the world, it will begin with a mom. The tie with David is that when things become so bad that it’s all disasters in the world, when everything is so terrible, the small drama between two or three characters might be really important. It might be the beginning of something really deep, where a simple question helps you know where the evil starts—and if you know where the evil is, you can fight against it. When that happens, everything becomes dangerous. In some ways, that’s why the “rescue distance” gets broken: Everything in the world Amanda inhabits is dangerous.

BP: Why does this novel focus on mothers, and not fathers?

SS: I think that’s related to my own life. In my memory, men in my family were useful in some ways, like carrying heavy things—but when something went wrong that was related to the soul, to emotions, women took care of it. That’s not because the men didn’t care, but they didn’t understand and they couldn’t seem to do anything about it. At the end of Fever Dream when all the women are gone the only ones who remain are two fathers who want to care—but they can’t really communicate.

BP: Why does David keep telling Amanda “this doesn’t matter” and to keep moving on? What is that all about?

SS: When I was writing the book many times I had the sensation that when David asks Amanda to move on, that he was actually talking to me, saying go for this another way. What an interesting kind of metaphor for what is worth saying and what is not worth saying!

David’s voice took time. I wrote about 12 different beginnings of five or six pages each, trying to find the voice of the narrator. At the end of that process, I heard David’s voice talking with Amanda. At first I thought their dialogue would be part of the novel. Then I realized that the dialogue was the novel. It was the story itself that told me how to do it.

BP: Disease and environmental devastation are global problems. Could your story be set anywhere? Or only in Latin America?

SS: This story could be set anywhere. In fact, the first time I heard about pesticides and their terrible consequences was through a documentary about this subject in France. But, mainly because of corruption, Latin America has the worst agrochemical regulations and agreements. And Argentina, in particular, is one of the biggest importers of soya—one of the products more related with pesticides. We spread this soya all over the world; it is the base of a lot of our food. Soya is in everything: cookies, frozen fish, cereal bars, soups, bread, all kinds of flour, even ice cream!

BP: How is the current American political situation viewed in Germany/Europe/the rest of the world?

SS: I think we are all really worried. Here in Germany, my circle of friends is not happy with Donald Trump as the new President of the United States—although the European right sympathize with him. And as a Latin American, I can assure you that the populist right could be really dangerous.

BP: Does a book like yours speak to modern politics more than a nonfiction book does? Why or why not?

SS: It does speak to modern politics, yes, but in another way. Literature can’t be informative, didactic, or indoctrinating, but it can leave a real mark on your fears, open new windows in your mind, make yourself question something you had never thought about before. And sometimes that is as important as factual information, even more reliable. 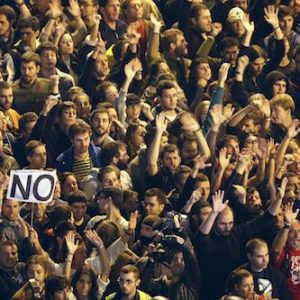 This Sunday, January 15, on the birthday of Dr. Martin Luther King, Jr., writers will gather across the country in a public...
© LitHub
Back to top