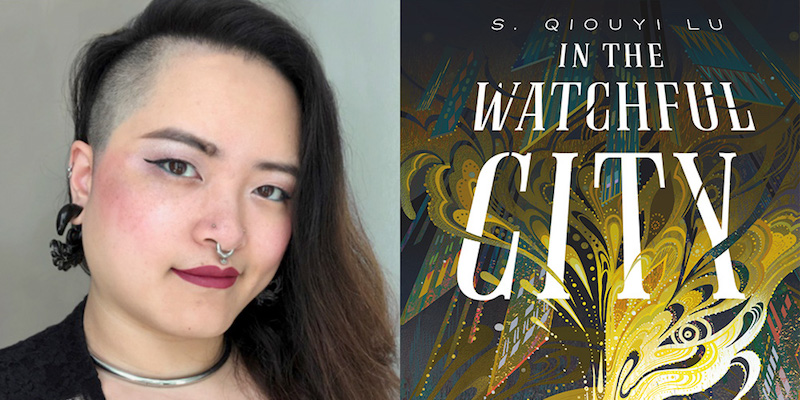 It’s no coincidence that one of the main characters in S. Qiouyi Lu’s In the Watchful City carries with ser a qíjìtáng, or cabinet of curiosities. Lu’s novella is, itself, a cabinet of unusual mementos, with many smaller objects carefully folded into the larger structure.

On one level the plot is simple. The qíjìtáng is full of stories, and its owner, Vessel, who hovers between life and death, needs to add one more story to ser collection in order to have a second chance at life. (Vessel’s pronouns are se, ser, and sers). So se asks Anima, one of eight people who provide surveillance for the city-state of Ora, for aer story. (Anima’s pronouns are ae, aer and aers).

But Anima’s life isn’t so simple. Ae serves as a node in the city’s Hub, which ae monitors by entering the consciousness of animals (including a gecko, raven, and wild dog during the course of the story). In this way, ae can travel anywhere and yet aer body is fastened by a stem to a tank of amniotic-like fluid.

Lu (whose pronouns are ae, aer, and aers) likens Anima’s experience of being both fixed and all-knowing to our relationship with the internet. “We’re sitting in front of a computer, and, physically, our body is stationed in front of this machine. But through this network, we’re able to explore so much,” Lu says. “We’re able to go to faraway lands, see through the eyes of someone else.”

The topics ae covers in aer New Books interview include aer inspirations for the novella (such as China’s facial recognition technology), aer interest in linguistics, including neopronouns, and aer fascination with experimental narratives.

Rob Wolf: Who is Anima?

S. Qiouyi Lu: Anima is human but has chosen to take on this role of a node overseeing the city. It’s primarily a role of surveillance but also involves processing information, like looking through records for fraud and things like that. For the most part, it’s a protective role that is cut off from the society itself. Anima and the other nodes are in a building called the Hub and they have a special cord that connects to their neck; they call it the stem, which supplies all of their nutrients and covers all their needs.

RW: Anima, on the one hand, is wildly free, because ae can enter the consciousness and control the body of any animal, so can technically go anywhere at any time. And yet, as you’ve just described, aer own body is fastened by this stem to a pod in what sounds like some kind of tank. … It makes me wonder about the tension between constraint and freedom.

SQL: Basically, Anima can project into the consciousness of various animals—it’s not possible to project into humans in this way—and act as the eyes and ears of the city through these living creatures. I was following a lot of cyberpunk tropes, but I wanted—instead of using computers and artificial technology—to tap into a more natural, biological network, because I feel that there’s so much that exists in nature that we haven’t learned how to replicate yet.

I feel that this network, since it is a form of cyberpunk, is in some ways like the Internet. You know we’re sitting in front of a computer and physically our body is stationed at this machine, but through this network, we’re able to explore so much. We are able to go to faraway lands, see through the eyes of someone else.

SQL: I define a neopronoun as a third person, singular pronoun that is not he/she/they or it. Basically, it’s an invented third person, singular pronoun, and they’re not as new as people might expect. There have been instances of their use in the 1950s and ’60s. I think that there is increasing use of them, but part of that is we lose a lot of historical reference. There are probably stories that used them in the past that we’ve lost to time or because people just weren’t keeping records of them.

I think because there’s a lot more awareness of nonbinary gender these days that people are exploring pronouns more. Of course, nonbinary gender itself is not necessarily a new concept, but I think it’s kind of entering the mainstream, at least in the West, in a more prominent way than it has previously.

When it comes to speculative fiction, I really like neopronouns, both because I’m nonbinary myself and I like to see how different people explore gender, but also because I’m a linguist. From a linguist’s perspective, pronouns are usually considered a closed class when it comes to morphology, which traditionally means you don’t add words to this class. We make new nouns and verbs all the time, but traditionally it was thought that you don’t introduce new pronouns, or is it very difficult to integrate them.

And while people do often stumble initially, with practice it becomes pretty easy to use them. That was part of why I didn’t include any explanation in the book—except in the audio book, because it’s more difficult to tell what word is being said. But in the print version, I didn’t include any introduction because I wanted to just throw the reader in and be like, ‘Yeah, this might be kind of jarring, but you’ll find over time that it becomes more natural.’ It’s a great way to explore different ideas and concepts and try something new.

From the Fall of the Towers to Building Anew 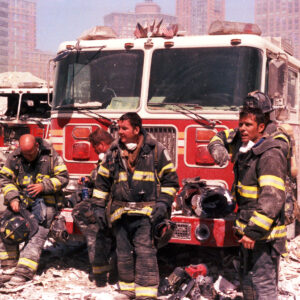 From the Fall of the Towers to Building Anew

In 1990, I had arrived in the United States for the first time, settling in New York with a couple of hundred dollars and a dream...
© LitHub
Back to top