Rick Moody, Life Coach: I Need to Learn to Fight

In Which Rick Moody Advises a Path of Non-Violence

I’m considering training in one of the various forms of martial arts and wonder if you might be able to advise me on which is most effective.

First, you might want to know about my past experience and the reasons for my interest. Despite what I’ve told some women, I have never been in a fight since adulthood that has involved any more than pushing. As a youth, however, I was punched in the face by classmates on three separate occasions, one of which resulted in a concussion. In response, I did nothing. So, in short, I have no self-defense experience, but some fighting experience.

As for my current interest, my girlfriend describes her ex-boyfriend as a bit of a “hot-head” who would likely instigate a fight with me if we ever ran into him. And because he’s “kind of a big guy,” she’s glad I have the extensive fighting history and boxing training that I told her about.

Ethically, I oppose violence, even violence on screen when depicted for entertainment’s sake alone. But I also have primal, Darwinian desire to vanquish my foes and be the most dominant male. Can this dichotomy coexist inside of me?

Oh, and which martial art should I practice?

It is true that Rick Moody, Life Coach, is a full-on pacifist. A pacifist in 99.9 percent of the possible areas in which one might have to weigh and evaluate one’s attitudes about “violent behavior.” I abhor all military adventures, for example. All of them. Every single one. The righteous and the misbegotten alike. I abhor bombing in Sarajevo and the Khyber Pass, as I abhor bombing in Hiroshima and Dresden. I abhor drone strikes, and I abhor boots on the ground.

This despite the fact that I too was beaten down as a child (though it’s true I was not concussed). I was beaten down. I think the technical term, Concussed, was fag-bashed. Or at least I was beaten down and called faggot repeatedly. As I have often said, I was called faggot so often in middle school that I came to believe it was my middle name. Even in boarding school, later on, among people who now affect to call me a friend, I was called faggot, mostly by men, though not exclusively. The physical abuse, however, was mostly when I was in public school, and it was one reason, I think, that my parents wisely elected to remove me from the public school systems of Fairfield County, CT.

The question is: what to do about this, as a man? What to do about the fact that one was physically abused as a younger person, and retains a desire as yet to even the score with the bullies and abusers and homophobes? In whatever tiny amount. I said 99.9 percent pacifist above, when describing Rick Moody, Life Coach, because there is one area where I am a failure, and that is when I am behind the wheel of a motor vehicle. It is not, Concussed, that I drive erratically, not exactly, but I really, really, really hate that other men drive erratically, at 90 miles an hour, swerving between lanes, tailgating, and failing to signal. Sometimes, Concussed, it just comes over me, and I feel that I have to teach these men a lesson. I have, on a few occasions, lodged myself in the left lane, slowing down to a leisurely 65, driving right next to someone in the middle lane at a similar speed, just to fuck with some steroided fitness expert in a Mustang who is tailgating me and thinks that his situation demands that I should yield. Concussed, this behavior is definitely indefensible. It is dangerous, it drives my wife crazy, and it rarely results in a lesson learned for the aggressive driver. He will find his way forward in due course, perhaps in the slow lane, where he least belongs.

What my behavior is, however, is human. It is, I think, exactly human to be 99.9 percent pacifist, and a malingerer, now and then, in one tiny area. This is a very human complex of tendencies. The human animal is the animal who aspires to the spiritual, the philosophical, but whose biology is otherwise noteworthy for its ignorance thereof. My dad used to like to quote Ernest Hemingway’s celebrated poem, “The Earnest Liberal’s Lament,” and it is perhaps useful in this regard today:

That some girls bite,

What can I do

What then is the truth of our situation, Concussed? Is it as Hemingway indicates? That we are hairless chimpanzees, savage and violent, with a tiny little bit of bonobo that shines forth on the good days? As your life coach, I have to recognize the grim truth of your inner longing “to vanquish my foes and be the most dominant male.” I recognize it. I think many men, if being honest, would admit to this feeling occasionally. But, Concussed, admitting to the feeling, to the biological absence of sapienza in the homo sapiens sapiens, and acting upon the feeling are two very different things. Acting upon the feeling, would be to say that you are chimpanzee, and that’s that, and you might as well drag your knuckles along while plotting to murder the alpha ape.

I think otherwise. I love that the great defender of the biological, of the will to power, Friedrich Nietzsche, intervened to prevent the mistreatment of a horse: “Nietzsche, early in January 1889, saw a coachman flogging a horse, rushed toward it. Throwing his arms around the horse, Nietzsche collapsed in unconsciousness, and was carried home.” (Wikipedia, and elsewhere.) Nietzsche, in his body, at the end of his life, showed that mercy was the force for good that he had hidden away in his writings. (Others demonstrated this mercy, too, heroically, with their bodies, Martin Luther King, Jr., and Mohandas K. Gandhi, and Tolstoy, and His Holiness the 14th

Dalai Lama of Tibet.) This seems to me the much more complex human truth, not that every idealist has a little bit of lamentable social Darwinist about him, which is somewhat obvious, but that for every theorist of the physical, as with every brainless brawler out in front of a tavern, there is a spot in him in which he aspires to the spirit. Always the flickering of the spiritual in which we reach for better. This is the ambition that changes those who aspire to it.

So you ask me what martial art should you practice? I say T’ai Chi. Or maybe Falun Gong. And I say that whosoever shall smite your right cheek, turn to him the other also. I believe that you can do it, Concussed. I believe that you can go walk the streets in your town in California, confident in your repudiation of casually violent behavior, your repudiation of revenge, knowing that this is the more admirable masculinity. The one that shrinks from clichés of the masculine. I believe you can do it. (You can carry this letter with you, and present it to the offending knucklehead, if you like.) According to this plan, you will have self-respect, which is admirable indeed, which is the beginning of wisdom.

And its from the position of this wisdom that you might better negotiate telling your romantic partner about your battles past, truthfully, honestly, and with the poignancy that these tales are due. I am willing to guess she can live with a little poignancy and a little truth.

Interview with a Bookstore:
Papercuts J.P. 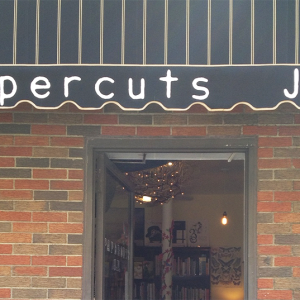 Interview with a Bookstore:
Papercuts J.P.

I opened a bookstore for personal survival and to share my knowledge and love of books with my community (Jamaica Plain,...
© LitHub
Back to top