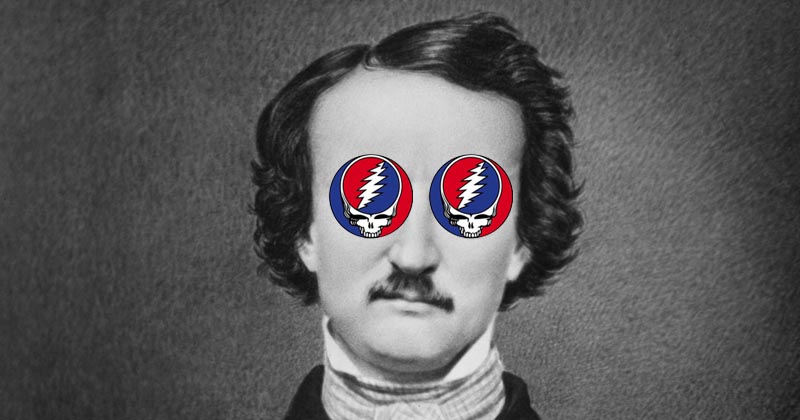 Remember when the Grateful Dead did a 12-minute freestyle based on “The Raven”?

It’s less than a week away from Halloween, and I’m feeling the excitement that always comes with an agreed-upon atmosphere. For me, this enthusiasm for the eerie is limited to a week in October, but some don’t let month dictate their mood. The Grateful Dead, for instance, weren’t moved by norms, seasonal or otherwise, on April 19th, 1982—when they chose to pay tribute to Edgar Allan Poe’s frightening classic “The Raven” via a twelve-minute, nitrous oxide-fueled freestyle.

The Dead performed the “Raven” tribute on the last day of a tour, in Baltimore, Maryland—Poe’s hometown. This is likely what moved them to turn their experimental semi-improvised songs “Drums” and “Space” into the Poe-influenced “Raven Space”: ambient drums become groaning, creaking, deranged laughing. The words start at 1:58—“quoth the Raven, ‘Nevermore’”—and the nitrous oxide is a constant throughout (you can tell because of the audience member exclamations of, “Oh, not the dentist,” and a band member saying, in a frightening voice, “More nitrous . . .”).

As far as devoted fans know, “Raven Space” was only performed once; happily, it was caught on tape. Listen to “Raven Space” below, or, if you want to get your Raven fix but have more traditional tastes (?), check out Vincent Price performing Edgar Allen Poe’s stories as Poe himself.