Rekindled: Breanne Fahs on Women’s Rage and the Art of the Manifesto

On this episode of Rekindled (which seeks to rescue canceled book tour conversations), Breanne Fahs talks to Roxanne Dunbar-Ortiz about Fahs’s book Burn it Down, out now from Verso Books. Fahs is a professor of Women’s Studies at ASU and is also a practicing psychologist. Roxanne Dunbar-Ortiz is a historian, activist, and author, most recently of An Indigenous People’s History of the United States. They talk about the long, understudied history of feminist manifestos, and what we can learn from women’s rage.

Roxanne Dunbar-Ortiz: I know you go into it some, but how did you get interested in manifestos? What brought you to do all this incredible deep research and extensive expose of feminist manifestos?

Breanne Fahs: I didn’t know much about manifestos until I read Valerie Solanas’s Scum Manifesto. With so many things in my work, there’s this nucleus with Valerie that explodes in different directions throughout my interest and the things I write about. Also, as a genre, the manifesto feels understudied and undervalued. They are disobedient and funky and brash—they have this tone that no other writing really has. They’re difficult, temperamental and really revolutionary documents. As I started to look at various manifestos it became clear to me that we were missing a body of work in the notion of feminist manifesto in particular—most people just know the communist manifesto and that’s it. To a certain extent I think people are aware of manifestos in the art world, but I don’t think many people understand that feminism itself has produced this very rich body of manifestos over the course of over a 100 years. My book is trying to reclaim that, make a space for that, and offer a space to ask what does it mean in particular to value and address women’s anger and the way that anger comes through in the writing. So this is my effort to put all these bodies of work together.

RDO: I often get responses to the “Hate the Rich” manifesto I wrote in 2008—and I always get this response about how negative and awful hatred is. If we look at it by saying the opposite of hatred is love, then it is so dialectical, and if you don’t love something then you hate something. Why is it we have such a hard time saying that there are hate-able things?

BF: Yeah. Also though hate does come from love in many ways—we hate the rich because we hate that the poor suffer, and that comes from love for our common fellow humans. So I totally disavow that too that hatred and anger is bad for us, because at its root it comes from a radical position of love, it comes from wanting something to be better, believing it could be better. I think anyone who criticizes the US government for example, that doesn’t come from complacency that it can’t get better, it comes from knowing that it doesn’t have to be this way, and that infuriated feeling comes from outrage and knowing that it could be better. That is a weird dichotomy, because if women are only allowed to express solidarity and love, then there is no target. Who is it that is disavowing women of their rights?

I’ll just read one small passage from the very beginning of the book—it was a beautiful poster that I found that came out of the South Africa Women’s Day, August 1956

Now you have touched the women, you have struck a rock, you have dislodged a boulder, you will be crushed.

I think this is very powerful, and shows how much we have to learn from different cultures and different historical periods. But this notion that women’s anger, once discovered, is a boulder that will crush you—that feels true.

Soothe your troubled soul with the only surviving recording of Virginia Woolf's voice. 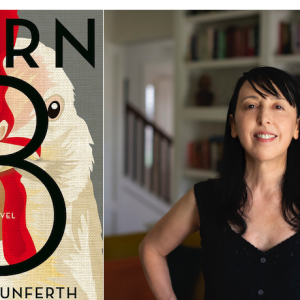 On this episode of Sheltering, Maris Kreizman talks to Deb Olin Unferth about her novel Barn 8, released on March 3. Barn...
© LitHub
Back to top