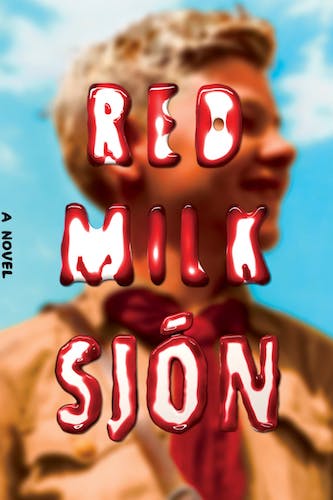 The following is excerpted from Sjón's newly translated novel, Red Milk. Sjón is the author of the novels The Blue Fox, The Whispering Muse, From the Mouth of the Whale, Moonstone and CoDex 1962, for which he has won several awards including the Nordic Council's Literature Prize and the Icelandic Literary Prize. Victoria Cribb has translated several works of modern Icelandic literature, notably novels by Arnaldur Indriðason, Sjón, and Gyrðir Elíasson.

Mist has formed on the cool glass where cheek and mouth touch the window. Seen from the compartment door, the man’s reflection blends into the railway station outside: the entrance to the platform, the clock on the brick wall beside it, and the canopy protecting passengers from the hot August sun. It is thirteen minutes past one and, according to the ticket lying on the seat beside the man, it was here at Cheltenham Spa that his journey from Paddington was supposed to end. The train arrived punctually—at twelve forty-four—but it has been sitting at the platform for nearly half an hour now, and the passenger in the overcoat has reached his journey’s end in more senses than one. Yet from the mist on the window it is evident that he has not been dead for long—although his head is cooling fast, it still retains a lingering warmth.

There are two policemen in the railway compartment. One is busy going through the outside pockets of the man’s coat, where he discovers half a bar of chocolate, three small balls of scrunched-up wrapper and silver foil, a key on a simple ring, and a London Transport bus ticket. He unbuttons the dead man’s coat, revealing that underneath he is wearing a pair of blue-striped pajamas embroidered with the name of a West London hospital.

The inside pockets yield a recent passport with a photo of the man, issued in Reykjavík, Iceland, stating that he is twenty-four years old and his name is Gunnar Pálsson Kampen; a wallet containing Icelandic krónur and British pound notes; a thick envelope of money bearing the logo of a respected English private bank; and a folded sheet of paper with written instructions on how to travel by bus from Cheltenham Spa Station to the village of Guiting Power and a sketch map of the footpath from there to Pinnock Cliffs. Beside this last name someone has drawn a cross that has been converted into a swastika by the addition of four red lines. There is a red pen in the breast pocket of the man’s pajama jacket.

The other policeman is holding a notebook. In it, he writes in pencil: “Blond hair, gray eyes,” below which he produces a deft sketch of the body and the railway compartment.

The policeman who has finished going through the dead man’s pockets turns to his colleague and shakes his head. They both look out the carriage window. A small crowd has gathered on the platform to watch what is happening inside the compartment. Neither officer notices the three men in black shirts hurrying away from the train and disappearing into the station building.

Had he been old enough to understand the word he heard from his mother’s lips at the beginning of that day—the word that later would provide his first conscious memories of himself?

He had tried to mimic it but could hear that he had failed. He knew what water was, and he knew the names of all the colors and recognized one of them in what she had said, but the combination was new and so could mean something quite different.

His mother had twisted around in the front seat, leaned toward him, and repeated the word, very slowly, breaking it up into four parts. Her red-painted lips moved with each part as she summoned the sounds from her mind with the aid of her tongue, facial muscles, mouth cavity, throat, and the air from her lungs, forming an open spout to release the “R” that her tongue had formed by vibrating against the roof of her mouth just behind her small front teeth, then clearing the way for the “au” by dropping her tongue to the teeth of her lower jaw, and, in the space between, poking out its wet tip and vibrating it even faster as she blew out the “th” sound, then whipping it back inside her mouth to produce the “a,” which was still reverberating when she raised her lower lip to the edge of her front teeth, vibrating there in the “v,” which vanished as her mouth opened up for another “a,” then closed in a brief “t,” her tongue shooting so quickly to the roof of her mouth that he could barely glimpse it before she blew out the final “n” through her delicate nostrils.

The driver’s door was wrenched open. His father got behind the wheel, started the engine, and off they went. His mother turned around to face the front. He tucked his legs underneath him on the back seat, sensing that his father was watching him in the rearview mirror.

His two sisters had sat him down between them. It was their job to make sure he didn’t stand up on the seat, but when he did so anyway, neither lifted a finger to stop him. Through the rear window he watched their house growing smaller as the car drove away. His stomach tightened with fear. In no time at all, their house was so small that he would never fit back inside. It was then that he remembered the fly.

In the right-hand pocket of his shorts was a matchbox. And inside the matchbox was a bluebottle, a gift from the big boy who lived in the basement of the three-story house down the road. The boy had been hanging around with him and his sisters on the sidewalk in front of the house while they waited for their parents. As the June sun warmed the wall, the white cladding, salty from the winter’s sea-laden winds, had attracted the newly woken flies. Black as pitch, they buzzed their song and took it in turns to alight on the wall, where they would perch for an instant, silent but fidgeting, only to take off again if you tried to catch them. Though these lady flies were as fat as his thumb, it was hard to grab hold of them. The big boy, noticing what he was trying to do, had pulled three matchboxes out of his pocket. Selecting a red-and-white one, he had half opened it to demonstrate to Gunnar and his sisters that it was empty. Then, after motioning them to stand back from the wall, he had clapped the box, quick as a flash, over one of the bluebottles and snapped it shut.

They had taken turns to hold the matchbox, which vibrated excitingly in their hands with the bluebottle’s frantic bumbling. They’d held it up to their ears, listening to the fly as it buzzed and tried to take flight in the darkness, battering against the sides with bumps and drones. But the moment their mother came out of the house and waved to the sisters to get in the car, the big boy had taken off, after first slipping the matchbox into the pocket of Gunnar’s shorts. A few moments later, Gunnar too was in the car.

Now he was standing on the back seat, watching their house dwindle to nothing as they turned out of the street. The pang of fear had gone. The fly buzzed in his pocket.

“Make your brother sit down!”

Their father spoke sharply. His sisters dragged him down and forced him to face the front, pinning him there, each with a hand on one of his skinny thighs. When he tried to wriggle out of their grasp, they tightened their grip with silent determination. One of the sisters remarked to the other:

In the front, their mother began to sing a variation on “Ása’s Ballad,” tapping a finger in time on the tip of her husband’s nose.

Halfway between the west end of Reykjavík and their destination, this unintelligible word finally conjured up a picture in his mind:

A glass, brimming with red milk.

When they got there, the water turned out not to be red at all, except right under the banks where you could see down to the rust-colored gravel of the lake bed. He scooped up a handful, which trickled away between his fingers, as limpid as the water in the laundry tub he had his baths in at home. But you could skim stones on it. And although his own pebbles plopped straight into the water, he was party to the miracle of making flat stones bounce over the smooth surface.

On the way home he let the fly loose in the car.

Excerpted from Red Milk by Sjón, translated by Victoria Cribb. Used with permission of the publisher,  MCD/FSG. Copyright © 2022.

Pride and Prejudice, with Songs from Regency England by Jane Austen, Read by Alison Larkin 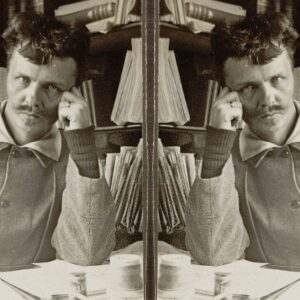 Lit Hub Weekly: January 18 - 21, 2022 Voyaging among the stars, while living through lockdown: Susan DeFreitas on her year of reading every Ursula K. Le Guin...
© LitHub
Back to top