Rebecca Solnit on Twitter Conspiracies, QAnon, and the Case of the
Two-Faced Mailboxes

"An honest photograph can be turned into almost anything by a misleading caption."

I remembered it as a Buddhist parable, but when I checked, it turned out to be a Yoruba story about the divine trickster Eshu, so maybe I heard it from a Buddhist teacher who repurposed the African story. Anyway, here’s one version: Eshu walks down a path between two fields wearing a hat that’s green on one side and red on the other, and the farmers on each side come to blows arguing over what they saw, each believing that the hat was entirely red or entirely green.

Eshu’s hat is also four mailboxes in Burbank, California, this past weekend, but let me unpack that. An acquaintance posted a screenshot of a tweet by a man named John Boyle that said, “The Post Office in Burbank, CA. All outdoor boxes locked shut. The entrance to the Post Office is locked and you can’t mail a letter?” It showed four of those drive-up mailboxes with the beaky protrusion through which you can shove a letter without getting out of your car, and each blue mailbox had a sort of red muzzle on it. It was posted on a Sunday when nearly all post offices are normally shut, but it was shared by my trusting acquaintance as further evidence that the post office is being messed with by the Trump administration to stifle democracy and screw the election.

All outdoor boxes locked shut. The entrance to the Post Office is locked and you can’t mail a letter? pic.twitter.com/Nm8qAXpUGb

I love the post office and take very seriously the attempts to sabotage this crucial institution. All those things everyone said about the circulation of news media, the delivery of prescriptions and payments, the ways we keep in touch, and the importance of mail-in voting actually working come November apply here. But the gods and my editorial training so fashioned me that I fact-check almost compulsively and if you are posting sloppy stuff, I am the hellhound on your trail. Right now there’s a loopy conflation of individual mailboxes with the fate of the whole system. That is, people are sharing tons of photos of mailboxes that are locked or apparently being removed as evidence of what is happening. There are two problems there.

One is that the USPS is an intricate network of workers and distribution systems and policies and places that together result in billions of pieces of mail being sorted and delivered, and specific metal boxes are not really an adequate stand-in for that. All the boxes could disappear and the system could be intact and vice-versa. The other is that an honest photograph can be turned into almost anything by a misleading caption. Images of mailboxes being removed can mean many things and be from many points in time other than this current phase of postal-service sabotage. One image of a locked mailbox said to be in Seattle, brandished as evidence of this crackdown on mailboxes, was said by others to be a mailbox locked down during recent protests. I don’t know if this explanation is true, but it’s reason enough to know that I don’t know what is.

Mailboxes have been, before this crisis, removed for many reasons including low use, damage, safety of contents, and because they’re being replaced. In March of 2019, the New York Times reported, “The United States Postal Service is replacing or retrofitting mailboxes in much of the northeast to eliminate the pull-down handle in favor of a slender mail slot with a singular goal: foiling thieves.” It linked to a 2017 piece on mail fishing—putting something sticky down the box to pull up mail from inside. In 2016, a news item in the Los Angeles Daily News, “Thieves raiding Valley mailboxes prompt Postal Service to take action,” showed locked mailboxes just like this week’s tweets do.

When people are afraid to fight you on principles and ideas, they fight you on facts, and if you want to win it helps to have them all in order.

Anyway, your faithful correspondent went to look at Mr. Boyle’s post and found that most people replying to him were amplifying the dismay and outrage in a sort of hallelujah-hell choir, but some Burbank locals were telling another story. On Twitter, multiple locals said the mailboxes in Boyle’s photo were open on the pedestrian side. A guy named Brendan Hay declared, “I live in Burbank. I hate Trump and his gutting of the USPS. But these mailboxes in the photo have had the drive-by side locked up for like 6 months. And the sidewalk side of these mailboxes are still open and accepting mail. The USPS is in danger, but donʼt create false outrage.” A Disney employee also confirmed that, as did another local who went by Haunted Cursed Foot, “This is my post office. These mailboxes are open on the other side, you just have to get out of your car to mail them. Itʼs been this way for months. This isnʼt part of the purge.” Then H.C. Foot bantered with a few people about the reluctance of Southern Californians to get out of their cars.

Meanwhile, someone in San Francisco had posted on the website Democratic Underground a screenshot of another tweet of the same photo by ex-basketball player and current “social medial influencer” Rex Chapman more outraged even than John Boyle, declaring this “a disgrace and a threat to American democracy. Shame on them. Shame on GOP.” This one has apparently been retweeted more than 20,000 times and lord only knows how many times shared on Facebook. At the Democratic Underground, the caption asserting that “Postal boxes are now being locked in California.” Beware of captions. A photograph of four boxes may represent activity all across an immense state or it may represent only four mailboxes or the photo may not disclose that the other side is unlocked, if it is.

In your entire life have you ever seen a LOCKED mailbox at the USPS?

Where are you @senatemajldr ? pic.twitter.com/YcbVUTnv37

The path to hell may be paved with good intentions, but it’s also paved with bad research and casual assumptions, and it could use more hellhounds baying at the people nonchalantly meandering they know not where. The same evening my noodling around on the internet led me to that post of the four mailboxes, I ran into a QAnon devotee posting memes about “100,000 CHILD SEX SLAVES IN THE NSA BUNKER UNDER THE GETTY CENTER IN LOS ANGELES.” The Getty has one of the most truly ominous underground parking garages in Los Angeles, and I had fun writing about that long ago, but it doesn’t really have room to hold 100,000 sex slaves, and the two million women and children trafficked through there—well you’d imagine that there would be some observable activity, like food deliveries, or a sewer system, or that some the missing would have names, faces, and interested family members. QAnon seems to be what happens when gullibility goes all the way or maybe when confirmation bias goes on a bender.

An honest photograph can be turned into almost anything by a misleading caption.

QAnon is worse than mailbox misrepresentations on approximately the scale that nuclear bombs are worse than rubber-band guns, but difference in scale isn’t necessarily difference in kind. And it’s a slippery slope. When it comes to writing nonfiction, let alone news, I’m a stickler for it actually being nonfiction (which has plenty of latitude for talking about uncertainty, imperfect memory, wishful thinking and imagination as such), and I’ve often told students that it’s a slippery slope from the things that your stepfather didn’t really smash to the weapons of mass destruction that Iraq didn’t really have. Besides, when people are afraid to fight you on principles and ideas, they fight you on facts, and if you want to win it helps to have them all in order.

But there’s another way to think about winning: focusing on the right target. The Washington Post reported last week, “The USPS is currently decommissioning 10 percent of its costly and bulky mail-sorting machines, which workers say could hinder processing of election mail, according to a grievance filed by the American Postal Workers Union and obtained by The Washington Post. Those 671 machines, scattered across the country but concentrated in high-population areas, have the capacity to sort 21.4 million pieces of paper mail per hour.” That’s like stealing a kidney from someone. Reducing the number of mailboxes is more like pulling out hair. Confusing the importance of hair and kidneys could be a fatal mistake.

The Trump administration and corrupt and authoritarian regimes generally are enemies of fact and truth and history and witness, and people who can’t tell the difference or don’t care about what’s true and what’s not are their useful idiots. They count on distorting, hiding, erasing, distracting, inventing and the rest, and systems of reliable facts, laws, and records are systems of accountability they seek to evade or destroy. It behooves those of us who oppose them to oppose them not only by seeking to remove them from power but by being their opposite, people passionately committed to care and precision and accuracy. Were he an authoritarian leader, Eshu would’ve wanted to deceive and divide; as a god he showed up to encourage us to be careful and look around the backside. 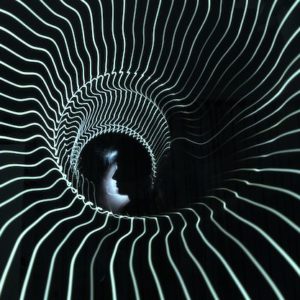 Social Media, Loneliness, and Rabbit Holes to Radicalism It is the strange twilight between daytime and darkness, jetlag and wakefulness, and I am standing at US immigration in a brightly...
© LitHub
Back to top