By Reading Women
For Reading Women‘s month on Ramadan Reading, Kendra and Sumaiyya discuss The Moor’s Account by Laila Lalami and A Very Large Expanse of Sea by Tahereh Mafi.

“When you have a multicultural, diverse community, what really connects us all?”

Kendra Winchester: I think that often, when we’re from a different community than the one we’re trying to understand, we tend to think of that other community as a monolith, that there’s only one single way to be that type of person, whether that be a race, nationality, or religion. I remember one of the first conversations we’ve ever had was about the fact that Islam is practiced all over the world, so you have the intersections of faith and nationality, and how that makes things look differently around the world, and how it’s important to represent that.

Sumaiyya Naseem: Yeah, so you have intersections of faith and nationality, as you said, and also culture, which is something that really influences the way people even approach their Muslim identities. A lot of times culture influences the way you even dress. There is definitely a multiculturality in the Muslim community, and I think this is especially evident when you go to countries where people migrate. But even as someone from Saudi Arabia, there was a lot of diversity in our community there. You didn’t have one way of being Muslim; there are so many ways.

KW: I think that’s so important, especially when you represent a religion, that you illustrate the different ways that people express that religion, and include that as part of their identity, because I’m finding more and more that when you talk to people that don’t practice your religion, there’s a lot of misunderstanding about what that looks like, and unfortunately most people only remember the most sensationalized version of your faith. And it’s like, no, that’s not how that works.

SN: I agree with that very profoundly. one of the questions that really stands out to me is, when you have a multicultural, diverse community, what really connects us all? What is it that makes you Muslim? And for me, ti’s the spiritual relationship we have with God, and whether you have a headscarf or a long beard or not, Muslims all experience faith. And if you identify as Muslim, you have some experience with faith and spirituality, so that is something that makes the discussion more nuanced, and we need to see more of that in fiction and nonfiction.

“The word ‘hijab’ itself means ‘modesty,’ so when we talk about hijab, it’s not only something a Muslim woman has to practice.”

SN: The discourse we have surrounding Muslim women’s hijab today is very focused on the headscarf, which is one element of hijab. The word “hijab” itself means “modesty,” so when we talk about hijab, it’s not only something a Muslim woman has to practice. It’s something men have; there are rules for men as well. The overall idea is that hijab represents the modesty of a Muslim person, not just Muslim women. The headscarf is one aspect of the hijab; it fulfills the requirement that we cover our hair. But the concept of hijab goes beyond that. It is in how a person behaves, in the humbleness or modesty a person has when interacting with others. Generally, it’s a way of being rather than what we see the hijab being represented as in the media, which is the headscarf. The headscarf is just one element, and the hijab is more holistic. 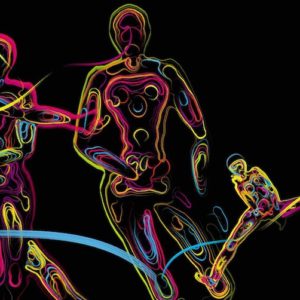 The artist Harold Cohen spent his life trying to create code that might be regarded as creative in its own right. Cohen...
© LitHub
Back to top