Javier Zamora on How Poetry Helped Him Break the Silence

¿When and how can you start to tell the story of where you or your family come from? ¿The why of being in another country? ¿And should you? Growing up in San Rafael, California, after emigrating alone from El Salvador at the age of nine, I never asked these questions. Didn’t dare. From the moment I crossed the border through the Sonoran Desert on June 10, 1999—no, way before that—from the morning I said goodbye to Grandpa from the back of a bus near the Guatemala-México border, I knew never to speak of what would happen.

I would not see Grandpa for six years, Grandma for nineteen. When I was reunited with my parents in the US on June 11, 1999, they told me not to tell anyone about being born in another country, about my “illegal entry,” about what I had experienced during those two months when no one knew my whereabouts. It became my secret.

Before I had the tools (the pen and paper of poetry) to replay, analyze, revise the trauma of my “refugee story,” I held all that anger deep inside. I wanted to forget what I had been through, but trauma doesn’t work that way. I thought no one—not my parents, not my friends, not the best counselor—could ever understand what I had experienced. I truly believed I had been the only nine-year-old who had migrated by himself, crossing an ocean, three countries, and a desert. Like Mahtem Shiferraw describes in her poem, “Talks about Race,” “I [didn’t] know how to fit, adjust myself within new boundaries— / nomads like me have no place as home, no way of belonging.”

I started drinking and hanging out with the wrong people in my apartment complex. Wearing certain “gang” colors. My friends and I were not real gangsters; we were just searching for acceptance. I could’ve been an honor-roll student in middle school, but my behavior kept me from it. Once, I threw a bottle of water at my seventh-grade teacher. I was kicked out of class multiple times for saying something vulgar to make everyone laugh. I needed to be seen. Heard. I wanted someone to ask me what was wrong with me and truly mean it. The question would’ve allowed me to break down and cry in front of them. But that never happened.

It was the first moment the two sides of my identity existed side by side.

It was in high school that I allowed poetry to discover me. My senior-year English teacher, Nina, devoted a full three weeks to the subject; she even brought a real-life poet, Rebecca Foust, to class. It was Rebecca who re-introduced me to Pablo Neruda. Like many Latin-American parents, my parents owned a CD of Twenty Love Poems and a Song of Despair in Spanish, which I hated. But, inside that classroom, seeing Spanish and English on the same page was like magic. It was the first moment the two sides of my identity existed side by side.

When Neruda talked about the Chilean landscape, it reminded me of home. “Mi Tierra (My Land)” was the first poem I consciously set out to write. I began rediscovering what I had tried to forget. Neruda led me to Roque Dalton, Claribel Alegría, Sharon Olds, June Jordan, Yusef Komunyakaa, Charles Simic, and eventually to poets in the Ink Knows No Borders anthology. Poetry showed me I was not alone.

I’d lived a childhood in El Salvador; but like Li-Young Lee says in his poem, “A Hymn to Childhood,” I just didn’t know “which childhood” that had been. ¿Was it the one that would “never end,” one that I would “never escape”? Certainly it was one that “didn’t last.” I’d traded hide-and-seek with my friends, for real-life hiding from authorities, in boats, under buses, under bushes.

What guided me was the hope of seeing my parents again. That I would finally meet the father that had left me when I was about to turn two. The father who had once held me on his shoulders as he ran onto the soccer field before his game. On the page, because of poetry, I could write that reality, those images I’d heard about. I could replay Mom’s palms caressing my head before I went to bed. Poetry let me tap into these and many more memories. It has taught me that it’s OK to open up. It’s OK to look inward and to hold those around us accountable for their actions. Taught me that speaking out is the beginning of healing.

It has been a blessing to have the tools to process my migration story, and those stories, ever present in the news.

I’m not saying poetry can fix everything, that I’m completely healed, but it was the beginning of my life-long road toward healing. In his poem, “Someday I’ll Love Ocean Vuong,” Ocean Vuong writes, “the end of the road is so far ahead / it is already behind us” and “The most beautiful part of your body / is where it’s headed.” I can see the end now.

I began writing this article outside at my childhood home in El Salvador this past July 2018, with frogs and birds all around. My house is in the flight path from the airport. I remember imagining, as a child, every plane was a plane to San Francisco International Airport. Four or five times a day I would look up, seeing my parents’ faces at the end of the runway. It did not occur for me that way when I was nine; I did not experience the privilege Lena Khalaf Tuffaha describes in her poem “Immigrant” of leaving my homeland “on the magic carpet of [my] navy blue / US passport.”

But this past July 11, 2018, at the age of 28, I did return to California on a plane. I had been in El Salvador in order to interview for an EB-1 visa, a Green Card. It was difficult to return to my country after 19 years. Multiple nights I was woken up by gunshots. In the morning, church bells signaled another death. It was difficult to see how much my town had changed, how much I had changed. Like Craig Santos Perez writes in his poem, “Off-Island Chamorros,” I [felt] foreign in [my] own homeland.”

I was there four weeks, three of those without knowing whether I would pass the visa interview. But I passed; it was poetry that got me to college and eventually granted me the necessary accolades that allowed me to even consider applying for the “Einstein Visa.” During those weeks when I didn’t know whether I would be allowed back into the US, it was a blessing to read poetry in my homeland. It has been a blessing to have the tools to process my migration story, and those stories, ever present in the news. Our countries haven’t changed. It’s still dangerous in El Salvador, we will continue to migrate. We simply want to be seen. It gives me some comfort to know, some of our stories exist, on our own terms, in our own voices, in collections like Ink Knows No Borders. 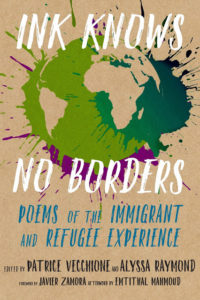 From the foreword to Ink Knows No Borders: Poems of the Immigrant and Refugee Experience, edited by Alyssa Raymond and Patrice Vecchione. Used with permission of Seven Stories Press. Foreword copyright © 2019 by Javier Zamora.

Javier Zamora was born in El Salvador and migrated to the US when he was nine. Unaccompanied, Copper Canyon Press Sept. 2017, is his first collection. He was a 2018-2019 Radcliffe Institute Fellow at Harvard and now lives in Harlem where he’s working on a memoir. More info at: javierzamora.net 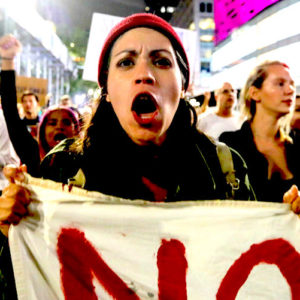 Red Ink is a quarterly series curated and hosted by Michele Filgate at Books are Magic, focusing on women writers, past...
© LitHub
Back to top
Loading Comments...