Reader, I Impeached Him

Evan Fleischer on the Literature of Bad Presidents

I do solemnly swear

The literature of impeachment runs thin while its promise runs deep. How often does one do this, after all? Why should one do this? What makes the time in which one does this different than all the other times? When do you just know? How do you prevent the process from being hijacked by a carnival of unreasonable people, like the way the Republicans did with Bill Clinton and Monica Lewinsky or Michel Temer and company did with Dilma Rousseff in Brazil? What’s the difference between existing on the margins of agitation and everyone sharing in the cleanly defined lines of history? Time Magazine may have come out in favor of impeachment, but a crowd once burned one of the owners of the MBTA in effigy way back when, and it’s not like the subway system in Boston has markedly improved since then, has it?

that I will faithfully execute

Perhaps all Presidents will be reincarnated as horses. Perhaps that’s the lesson we’ll end up drawing from all this. Perhaps that is our Great Truth, the lesson Karen Russell teaches us in “The Barn At The End Of The Term,” as well as details that tell us dialogue flows regularly between all the horses, too, with Rutherford B. Hayes confusing a far-off diesel engine for holy music, and the like.

Unless I am speaking too soon, because how could we forget Donald Barthelme’s “Robert Kennedy Saved From Drowning,” which—at one point—leads to a scene featuring the man discussing French literature and the existential mechanics of “a pastless futureless man, born anew at every instant?”

And what of the joyful hubris of Phillis Wheatley sending a copy of her poems to George Washington? Or the discursive panoramic of prosaics that marked Elizabeth Alexander’s “Praise Song For the Day?” And what about George Saunders’s freshly launched Lincoln in the Bardo?

Will Presidents refuse to believe their future as horses? Will Eisenhower proclaim that he’s “just incognito” and that “The Secret Service must have found some way to hide me here, until such a time as I can return to my body and resume governance of this country?” Will Lincoln return and tell us of the voices that aren’t quite here but aren’t quite in the beyond exhorting him to “lighten the load of those with whom one came into contact?”

the Office of President of the United States,

Before we turn our full attention to exorcising—where necessary—pernicious Russian architecture in the United States national security apparatus, it makes the most immediate sense for us to work towards ridding ourselves of the obviously pronounced toxic elements of Trumpism while still understanding that you may well have voted for Trump, but you are not a Trump Voter. How can you ignore a scene like this, after all? How can you ignore homes that look like piles of dishes left far too long in the sink? How can you see homes falling apart and not want to rev up the economic engines of a second New Deal like you hoped Obama would have eight years ago?

So—if a toxic feeling lingers for you—by all means, please show up at a town hall meeting and recite “I Want A Dyke For President” by Zoe Leonard in lieu of an actual question. Stand up and recite Eileen Myles, who once wondered out loud as to whether or not “everyone in America should run [for President] this year, as a pack, in utter silence.” Stand up and recite Emily Berry, who once ended a poem by saying, “Later I will call to tell you about the new prime minister, the worrying new developments, and about how I am writing my first political poem which is also (always) about my love for you.”

to the best of my ability,

“The Negro catchers could could no longer peacefully drag their captives through the streets,” Margaret Leech wrote in Reveille in Washington, a book from 1941 which chronicled the life of the capital during the Civil War. “Crowds gathered. There were protests, altercations, brawls.” And not only that, but, winding the years back to just after Fredericksburg: “Thousand after thousand, men littered the landings [of the Potomac], like spoiled freight.” When hospital architecture wasn’t where it needed to be: “…two thousands cots were placed in the halls of the House and Senate, in the corridors and the Rotunda.” Shortly after the Emancipation Proclamation: “I’m a Free Man Now” is sung North of 12th street. Later: “In February of 1863, the troops in Washington were flagrant in their hostility to Negroes, chasing and stoning them in the streets.”

Dan Rather momentarily described the rain on the television broadcast. As he brought everyone up to speed, he kept looking away and off-camera. It’s August 9th, 1974, and history is polishing away the bus strike from the spring, ignoring the fact that someone like James Comey is 14 years old, and slowly pointing its finger at the fact that—two hours later—Richard Nixon resigns the Presidency.

Does Trump’s behavior over the course of his first three weeks in the White House violate the oath of office? If you look at the articles of impeachment brought against Richard Nixon, the oath is the starting point from which we can begin.

If there’s an air of a problem, an accusation on the verge of being leveled, it’s worth imagining a vague defense: Trump thinks this is a world of executive action. There is precedent for it, but it is a precedent that has been challenged

: after 9/11, it was challenged; during the Korean War, it was challenged, and it spells out a particular truth: life cannot be a simultaneously simplified and souped-up variation on Truman vs. the steel mills—technically Youngstown Sheet & Tube Co. v. Sawyer—writ large by Donald Trump, as even an exchange during that very case makes clear:

The Court: So you contend the Executive has unlimited power in time of an emergency?
Mr. Baldridge: He has the power to take such action as is necessary to meet the emergency.
The Court: If the emergency is great, it is unlimited, is it?
Mr. Baldridge: I suppose if you carry it to its logical conclusion that is true. But I do want to point out that there are two limitations on the Executive power. One is the ballot box and the other is impeachment.

Imagine the equivalent of a Muslim Ban every week. Imagine this scale of mean-spirited, bigoted lawlessness sprung not only on all of us by surprise, but on the Senate

, the Department of Justice, and the Department of Homeland Security as well. Imagine the kind of leaks we’re seeing from the intelligence community come out every week—not so much for the rubbernecking, but for the actions themselves.

Then pair that imagined world with Stephen Miller going on Face the Nation and declaring that—and this is after the Ninth Circuit had ruled that the ban on the Muslim Ban remained in place—“the powers of the President to protect our country are substantial and will not be questioned.” Pair that with the fact that after passing through the whole of democratic Oz, there seems to be the possibility that we’ll have to deal with the Wizard, too—that is, Putin.

To threaten to invade a city and strip a college of its funds; to hear that Trump is still receiving payments from his business (including attending two private events after the report in the Times was released that benefit his business, let alone the dispatch CNN filed from Mar-A-Lago); to hear about his inability to get through two simple phone calls with two world leaders without threatening invasion and hanging up early (or the fact that he had to pause to have a missile treaty explained to him); to hear that a mission in Yemen went ahead without adequate planning or preparation; to realize that you don’t know where Russian influence begins and where it ends—it all seems to be rapidly pointing in one particular, inexorable direction.

of the United States.

What happens when you’ve formulated an answer to each question? 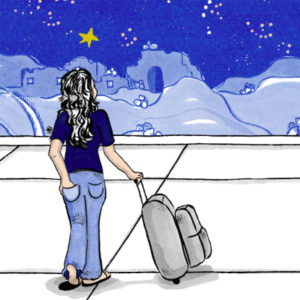 Amy Kurzweil’s first book Flying Couch examines one particularly divisive topic for modern Jews: How can we both remember...
© LitHub
Back to top