Deep in the night, as he drifts in and out of sleep, the writer conjures dazzling landscapes. The oddly repetitive and rhythmic first lines in “Autumn Night”—the opening piece of Lu Xun’s (1881-1936) experimental prose collection, Wild Grass—capture the surrealistic atmosphere and the volume’s message: However insignificant in our eyes, each being, like each jujube tree, has a unique existence. Rendering visible vulnerable humans and non-humans as they struggle to survive in an inhospitable world, the pieces in Wild Grass ask: What does it mean to exist, or to be human? How are we to relate to others whose lives are enmeshed with our own? Brilliant, imaginative masterpieces of a literary virtuoso— whose subjects include telepathic corpses, a talking flame encased in ice, and a shadow that wants to depart from its master—are beautifully rendered in the new translation of Wild Grass and Morning Blossoms Gathered at Dusk. A testament to Lu Xun’s radical hope and enduring quest to find beauty and meaning in a cruel and unjust world.

Beyond the wall of my backyard, you can see two trees. One is a jujube tree, and the other is also a jujube tree.

The night sky above them is odd and high. I have never seen a sky this odd and high in my life. It is as if he wanted to depart from the human world so that people would no longer see him when they lift up their faces. But for now, he is exceedingly blue, blinking his dozens of sparkling star-eyes, looking on coldly. The edges of his mouth reveal traces of a knowing smile as he scatters a thick layer of frost on the grasses and wildflowers in my yard.

I don’t know the actual names of those grasses and wildflowers or what people call them. I recall a certain kind that had tiny pink flowers, still blooming now, but even tinier than before. In the cold night air, she shivers as she dreams—dreaming of the arrival of spring, dreaming of the arrival of autumn, dreaming of a skinny poet wiping his tears of her last petals and telling her that though autumn will come and though winter will come, afterward, spring will still follow, as butterflies flit about and honey bees hum songs of spring once again. And so she smiles, though crimson from the cold and still shivering.

The jujube trees—they have just about lost all their leaves. Previously, one or two children would still come to strike them, but now not a single jujube remains, and even their leaves have all fallen of. The tree knows of the dreams of the tiny pink flowers—that after the autumn will come spring. He also knows the dreams of the fallen leaves—that after spring will still be autumn. His leaves have just about all fallen of and though only branches remain, they are comfortably stretched out, no longer arched as they had been when the tree was full with fruit and foliage. But a few remaining branches are drooping, protecting the wounds on the trunk sustained from the sticks used to strike of the jujubes. A few of the longest and straightest branches quietly, like iron rods, pierce the odd and high sky, making the sky blink its sinister eyes. They pierce the full round moon in the sky, making it blanch in embarrassment.

The sky, blinking its sinister eyes, turns an even more intense blue and becomes ill at ease, as if wanting to depart from the human world, to avoid the jujube trees, leaving only the moon behind. But the moon, too, has stealthily hidden itself in the east. With nothing left to them, the branches still quietly, like iron rods, pierce the odd yet high sky, intent on dealing him a fatal blow, no matter how the sky flashes his many seductive eyes.

“Wa!” a cry—an inauspicious bird on its night roam flies by.

I suddenly hear laughter in the middle of the night, muffled, as if afraid of rousing those asleep—yet the air from all around echoes in laughter. It is the middle of the night and no one else is around. I immediately make out that this sound is inside my mouth, and chased by the sound of this laughter, I immediately retreat to my room. I quickly turn up the wick of the lamp.

The glass pane of the back window dings as numerous flying insects recklessly crash into it. Not long after, a few make their way in, probably through the holes in the paper screen. Once they are in, the lamp’s glass chimney also starts to ding as they crash into it. One charges in from above and encounters the flame, and I believed at the time that the flame was real. Two or three rest on the paper lampshade, taking a breather. The shade had been newly changed the night before. The snow-white paper had been pleated into a wavelike pattern, and painted on one of its corners is a sprig of scarlet gardenias.

When the scarlet gardenias bloom, the jujube trees, their green stalks curving into arcs, will again dream their tiny pink flower dreams. Again I hear the midnight laughter. I hastily set my own mood aside to look at the little green bugs, dead on the white paper lampshade. Big heads with little tails like sunflower seeds, their bodies—only half the size of a wheat kernel—an adorable, pitiful green.

I let out a yawn, light a cigarette, and blow out a puff of smoke. Facing the lamp, I silently pay tribute to these exquisite emerald heroes. 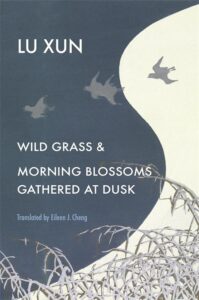 (1881–1936), born Zhou Shuren, was a writer of fiction, essayist, poet, translator, and literary critic. Eileen J. Cheng is Professor of Chinese at Pomona College. She is author of Literary Remains: Death, Trauma, and Lu Xun’s Refusal to Mourn and coeditor of Jottings under Lamplight, a collection of Lu Xun’s essays.
Share: 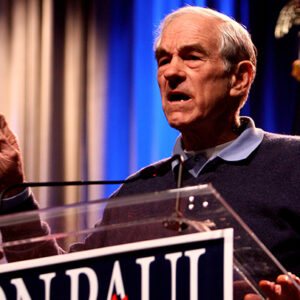 How American Libertarianism Became the Delusional Ideology of Greedy, Selfish Capitalists Hosted by Andrew Keen, Keen On features conversations with some of the world’s leading thinkers and writers about the economic,...
© LitHub
Back to top
Loading Comments...