Putin’s Attack on Ukraine is an Attack on Its Language: Poetry by Kateryna Kalytko

“Defend yourself to your last breath—and whatever you do / don’t let them near you.”

In one very real sense, the current war in Ukraine is about language. Vladimir Putin has presented the defense of Russian-speakers in Ukraine as justification for a campaign of cultural and political domination. In an article posted to the Kremlin website last July, he went so far as to compare the institutionalizing of Ukrainian language and culture to “weapons of mass destruction.” Extending the metaphor, he continues: “Such a crude, artificial dichotomy between Russians and Ukrainians may have caused the total Russian population to decrease by hundreds of thousands, or even millions.”

This accusation is no less chilling for its absurdity: Ukraine, the argument goes, has robbed Russia of ethnic Russians by compelling them to speak Ukrainian. This cultural shift from Russian towards Ukrainian is what Putin seems to mean when he evokes the term genocide, as a perverse pretext for the mass killing of Ukrainian civilians.

The poet Kateryna Kalytko, rather than denying the violent power of words, embraces it. “Here, take this language, woman,” she writes in a 2019 poem. “Use it to shoot.”

Nothing has united the Ukrainian people around a single language like Russia’s attack on its sovereignty. In a paper published in 2017, the political scientist Volodymyr Kulyk found that following the 2014 annexation of Crimea and outbreak of the Donbas war, more people throughout Ukraine “want the state to help the Ukrainian language to be more widely used, in accordance with both its legal status and symbolic role as the national language.” This past January 2022, as Russian troops prepared to invade, Ukraine passed a language law, requiring that Ukrainian be used in official contexts, including schools.

Kateryna Kalytko is a poet, prose writer, and translator who grew up in the central Ukrainian city of Vinnytsia and attended Russian-language schools. She has spoken of her conscious choice, by the time she was a teenager, to write poetry in Ukrainian. When asked how her education in the Russian literary tradition affected her poetry, she has called this a “charge to protest.” For Kalytko, Russia’s history of cultural colonialism in Ukraine is a call to arms:

There are plenty of bullets, don’t spare them,
if they run out—
make new ones out of words,
only slender feminine fingers are suited to such maneuvers.

The charge to use Ukrainian to resist Russian imperialism has long been felt by Ukrainian poets, from the Romantic Taras Shevchenko, who was born into serfdom, and wrote Ukrainian poems in exile, to the fin-de-siecle poet Lesya Ukrainka, who wrote, in 1896:

Word, why aren’t you a solid scream,
That shines bright in the midst of the battle?
Why aren’t you a sharp, ruthless sword,
Which will sever my enemy’s head at the shoulders?

By the late 19th century it had become next to impossible to publish Ukrainian literature. The 1863 Valuev Doctrine and subsequent 1873 Ems Ukase forbid the publication of most literature in Ukrainian. Poets like Lesia Ukrainka had to be published in Galicia, then in the Habsburg Empire, and have their work smuggled into tsarist Russia. Many writers and scholars in western Ukraine recorded peasant folk songs and speech as a way of preserving the language and culture.

“We are a terribly logocentric nation,” Kalytko said in an interview in 2020. Having experienced much of their history as a nation without a sovereign state, Ukrainians have long redoubled their emphasis on language, viewing it as a sacred space for culture, regardless of whether they grew up with Ukrainian as their first language. The Ukrainian futurist poet Pavlo Tychyna, in his 1943 poem “Word” (Slovo), plays with the proximity between the word mova (language) and its proximity to the comparative mov (as though), rhyming both with obnova (renewal) and the title of the poem, Slovo (word):

And in Ukraine, a mova—
As though the sun were ringing,
As though gold were shining,
All the ancient and renewal—
The Ukrainian mova.

When, as a graduate student I moved to Ukraine to conduct research, I would frequently apologize for my Ukrainian in my more fluent Russian, explaining that I’m still learning the language. “It’s a beautiful language,” they would invariably answer, regardless of their native tongue. “I stand firm in this belief,” Kalytko said in 2020, “Your language, your verbal and non-verbal experiences related to it, are both your first and last superpower, the last territory, which you carry inside you. Even if, God-forbid, you lose the territory marked by a state border.”

Kalytko’s poems often read as love lyrics to the Ukrainian language, or to Ukraine. They unabashedly evoke love to explain the passion of memory, of exploring culture.

To love in a time of war is
to wear earrings in spite of everything,
so the holes don’t close,
the ones you pierced with Grandma
at the old beauty parlor.

In addition to her original poetry of war, Kalytko has translated Croatian and Bosnian poets of the Balkan war. At thirty-nine, she has published nine books of poetry of fiction, which have won prizes in Ukraine and internationally. The language of her poetry informs her prose. Her 2019 collection, Nobody knows us here and we are nobody, for example, combines poems and poetic vignettes, many of which describe the disorienting feeling of internal displacement.

“Despite the whole wonderful legacy of Ukrainian literature, we still don’t have enough words to describe what is happening to us now.”

–Amelia Glaser, Cambridge, MA
This is part six in a series of Ukrainian poetry in translation.

Here, take this language, woman,
Use it to shoot.
Defend yourself to your last breath—and whatever you do
don’t let them near you. Use
the radio interception system
and the night vision riflescope.
These are included. And don’t pretend you don’t know how to use it.
Keep your eye trained
on the enemy’s location and on his slightest advance.
Let him come within shooting range—then strike the target and
don’t hesitate.
There are plenty of bullets, don’t spare them,
if they run out—
make new ones out of words,
only slender feminine fingers are suited to such maneuvers.
And come what may, don’t let them near
the old border, where father’s plums lie ripe and heavy.
When they cross it—you must confront them, hand to hand.
Then pierce them with your bayonet, slit them ear to ear,
slash, smash, and scalp them
until the light dims before your eyes.
When you wake up, you’ll stroke the prickly nape
of your recruit-son, hand your husband his crutches,
and then, you’ll start over.
Who said we left you to your fate?
We’ve armed you as best we could.

But these things happen:
heroes have died, enemies survive,
and people, regular people, neither one nor the other,
string and scatter the beads of happiness—
celebrating love, somebody’s birthday,
A house-warming party,
while you’ve filled an earth pie with your flesh.
The planets haven’t ceased their orbit,
even the trams haven’t changed their schedules.
Outside the hospital window there’s a construction site,
hammering stakes, knocking like distant artillery,
and a boy, grasping a piece of rebar, hits it against the asphalt,
the way a night rail worker hits the wheels of the train,
that you ride in oblivion across the whole country,
falling hard, your belly sticking in the earth pie,
that’s been stuffed to the brim with people.

They asked Passiflora for her passport at the entrance to the garden,
but she didn’t have one.
What she had was a thorny and knotted stalk of sorrow,
and a flower with a full array of passions, nails in stigmata,
a crown of thorns, but no passport.
Where are you taking all this pain, it’s contraband,—
they ask with jeering smiles;
They’re probably mocking me,—she thinks quietly.
The fog lifts from the river channel, making it so homeless.
In the garden sturdy apple trees are weighed down, resting their branches on the earth,
like runners at the starting line.
You can hear the delicate peony dropping its flower, petal by petal, to the grass.
A bit further, an intrepid army of currants, raspberries,
And a stray ivy, having crept in through the backdoor, pushes them from the wall.
But she was seeking a gate that barred access to her alone.
Well what can I do, she says, I’m sorry, I’ll just wait here;
She clutched a stone and has held on for five years,
her blue eyes blossoming, bearing heart-shaped fruits.

–Translated, from the Ukrainian, by Amelia Glaser and Yuliya Ilchuk.

To love in the midst of war is
to wear earrings in spite of everything,
so the holes don’t close,
the ones you pierced with Grandma
at the old beauty parlor.
The darning needle punctures
the pink baby flesh still
untouched by trauma.
The sound with which the needle slowly
breaks through
is too soft to call
a crunch or a crack,
but it’s there.
Why isn’t she crying?—The hairdresser
looks at Grandma.
—She isn’t going to cry,—
Grandma answers

–Translated, from the Ukrainian, by Yuliya Ilchuk and Amelia Glaser.

Kateryna Kalytko is a poet, prose writer, and translator. She has published nine collections of poetry and books of short stories. She has received many literary awards and fellowships, among them the Central European Initiative Fellowship for Writers in Residence, KulturKontakt Austria, Reading Balkans, Vilenica Crystal Award, Joseph Conrad-Korzeniowski Literary Prize, BBC Book of the year and Women in Arts Award from UN Women. Striking imagery emerges in her recent poetry like puzzle pieces that create a violent and shocking picture of war, conveying the loss and pain that is experienced during a search for safety and identity amidst the war.

What Comes After Neoliberalism? And Is It Worse? 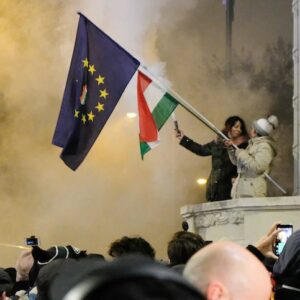 What Comes After Neoliberalism? And Is It Worse? Tourists make the pilgrimage to historic Mitteleuropa to observe the past. But I’ve spent the last few days in the Hungarian...
© LitHub
Back to top