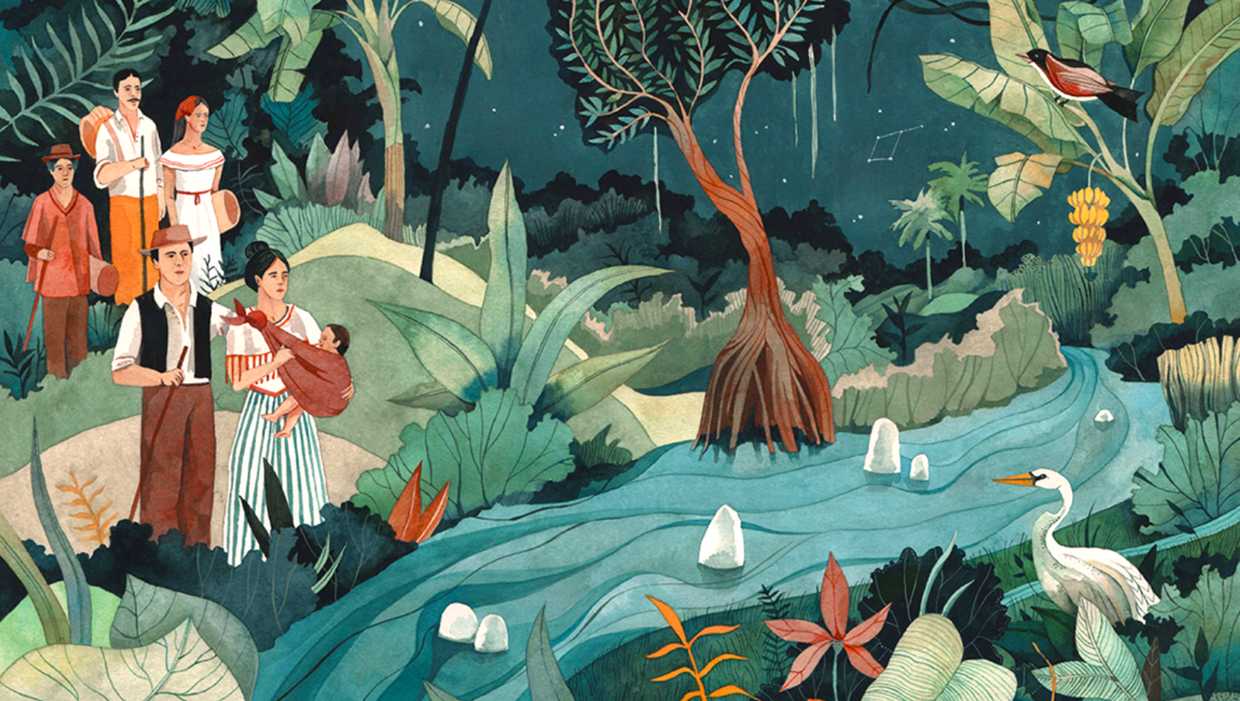 Angus Fletcher on What García Márquez Understood About Forgetting and Relearning

Change came to Colombia in 1959. For it was then that rebel peasants escaped into the mountain outback of the Andes to found the Marquetalia Republic.

The republic was a wonder, quilting freedom and justice with monsoon rain forests and avalanche peaks. And although its size was modest, its hundreds of inhabitants had a bold plan to expand. They’d erase the old system of monied power and rescript civilization, building utopia.

But abruptly, in the late spring of 1964, utopia was ended. The Colombian government descended with sixteen thousand soldiers backed by US Huey choppers rattling angry in the sky. Ambushed, the rebels were forced to abandon the republic, grabbing machetes and petrol bombs as they fled for the heights. Up in those heights, the rebels formed the Revolutionary Armed Forces of Columbia, and for the next sixty years, that guerilla army waged an increasingly violent resistance against global capitalism. Its soldiers kidnapped government ministers, extorted coffee farmers, and trained eight-year-olds to fight with Kalashnikov rifles. Until at last, the revolutionary forces tore themselves apart in bitterness and blood.

Yet despite the republic’s ugly demise, the hope of change endured in a rundown barrio many miles to the northwest, where there sat another Colombian rebel: Gabriel García Márquez. Márquez admired the republic’s world-transforming ambition, but he anticipated its doom from the start. For before the republic, the same plan to break with the past and rewrite Colombian society from scratch had been attempted by General José María Melo in the coup d’état of 1854, and by the radical Liberals in the Thousand Days’ War of 1899, and by General Gustavo Roja Pinilla in the coup d’état of 1953. Each time, the people of Colombia had been promised a whole new way of life. And each time, they’d gotten carnage, misery, and chaos instead.

So, as Gabriel García Márquez pondered this history of failed change, he decided to attempt a different revolutionary road. Instead of trying to escape the past, he would revisit it—anew.

The Beginnings of the New World

It was in July 1965, just over a year after the death of the Marquetalia Republic, that Márquez was transformed by the memory:

In a flash, I realized: I had to tell the story the way that my grandmother told hers, starting from that afternoon when the boy is taken by his father to discover ice.

Out of that “flash” came the first line of a novel published in 1967 as Cien Años de Soledad—One Hundred Years of Solitude: “Many years later, as he faced the firing squad, Colonel Aureliano Buendía was to remember that distant afternoon when his father took him to discover ice.”

This stunner of an opening sentence would dazzle millions of global readers, helping to earn Márquez the Nobel Prize for Literature. And its extraordinary brilliance culminates with the ending that Márquez glimpsed from the beginning: “to discover ice.” Those three words are so calmly matter-of-fact—and so brain twisting. How is it possible to discover ice? Isn’t ice something that the world already knows?

The answer is that Colonel Aureliano Buendía and his father didn’t really discover ice. They rediscovered it, just like when we first savor a guava or learn of the Marquetalia Republic, we’re rediscovering something that other people have discovered before. And, in fact, this is what we’re doing when we start reading One Hundred Years of Solitude. At the same moment that the colonel is remembering his rediscovery of ice, we’re rediscovering that rediscovery. We’re learning for the first time something that the colonel already knew.

This experience of rediscovery occurs again and again in the initial pages of One Hundred Years. First, we rediscover how the colonel’s father rediscovered the world: “The world was so recent that many things lacked names, and in order to indicate them, it was necessary to point.” And then more rediscoveries ensue:

Every year during the month of March, a family of ragged gypsies would set up their tents near the village, and with a great uproar of pipes and kettledrums they would display new inventions. First they brought the magnet.

Why does One Hundred Years of Solitude lead us through all of these rediscoveries? Why does it relentlessly present and re-present the old world as new? It all goes back to that “flash” where Márquez rediscovered his grandmother’s storytelling way. Because in that flash, something special happened to his brain.

The Science of Rediscovery

Our brain is capable of a strange feat known as relearning.

Relearning makes use of our ability to forget, which is the neural not-quite-opposite of learning. Learning occurs when our neurons extend new synaptic connections, and forgetting happens when those connections shrink. Yet curiously, our brain forgets at a more staggered rate than it learns: the first synaptic connections can wither in minutes, while the last ones can remain for years, hanging on to scattered fractions of long-ago life lessons.

There’s no answer to this mystery. Our brain emerged blindly through natural selection, so it doesn’t (and never did) know. But even though the rationale behind our neural method of forgetting is nonexistent, it does have its advantages. By not forgetting all the way, we can save time: it’s faster to relearn riding a bicycle than to learn from scratch. And relearning has another benefit too: it allows us to learn differently on the second go-round. In relearning, our neurons reach out fresh connections that come to coexist with the still-remaining connections from before, producing a blend of past learning and new. And sometimes that hybrid leads to a creative breakthrough: we devise a different way of bike riding than our old brain knew.

Why does our brain maintain a library of books with half-vanished pages?

So, by forgetting and then relearning, we create an opportunity for a special kind of discovery that brings wisdom from the past but also fresh eyes from the present. If we’d never learned in the first place, we’d have nothing more than our current perspective to guide us. If we’d never forgotten, we’d repeat our history in an endless loop.

This process of relearning enriches each day of our life. If you’d like a quick taste of it now, just go to your bookshelf and grab a novel you read years ago. As you start to turn the pages, you’ll feel your brain entwining old details it remembers with new ones it never grasped before, mingling nostalgia with epiphany, and making the novel feel novel once more.

One of those discoveries was made with the very same stargazing tools—the astrolabe and sextant—that the colonel’s father rediscovers in One Hundred Days. The tools were wielded in a sixteenth-century northern Polish town by Nicolaus Copernicus, an astronomer who spent his nights studying the positions of the constellations. Three hundred years earlier, these positions had been recorded by Arab astronomers in a big book, The Alfonsine Tables, that Copernicus consulted carefully each evening. But as Copernicus took up his own astrolabe and sextant to reiterate the sky measurements of the past, he experienced an unprecedented epiphany: the earth wasn’t at the center of the cosmos, as the Arab astronomers had thought. No, the earth was spinning around the sun.

If we’d never learned in the first place, we’d have nothing more than our current perspective to guide us. If we’d never forgotten, we’d repeat our history in an endless loop.

This was an astonishing insight—so astonishing that Copernicus waited for more than twenty years, until the very last moments of his life, to publish: “I realized what a strange declaration it would seem to those who knew that the wisdom of centuries had placed the earth motionless at the center of the universe, if I, to the contrary, asserted that the earth moves.”

A world that flew.

Copernican Rediscovery in One Hundred Years of Solitude

One Hundred Years of Solitude originated in Gabriel García Márquez’s own Copernican rediscovery: “I had to tell the story the way that my grandmother told hers.”

By relearning his grandmother’s old style of storytelling, Márquez began telling a story unlike any before. And that story brims with its own Copernican rediscoveries, like the one where the colonel’s mother, Ursula, journeys to the lands outside the village of Macondo. To make this journey, Ursula follows the earlier footsteps of her husband. Yet unlike her husband, she doesn’t return empty-handed. She comes back with a crowd of people who look familiar yet not:

They came from the other side of the swamp, just two days away, where there were towns that received mail every month in the year and where they were familiar with the implements of good living.

Like Copernicus, Ursula has followed the old route to the old place— and found a new world.

This is the most hopeful moment of Márquez’s novel. Slowly, the mood of rediscovery will ebb away. The characters will forget more and more of the past, dooming each subsequent generation to repeat history instead of relearning it. But even though the characters of One Hundred Years end up going round and round to nowhere, the novel itself keeps change going by teaching us Ursula’s revolution blueprint.

By relearning his grandmother’s old style of storytelling, Márquez began telling a story unlike any before.

Why does poetic language work like this? Why does it put words in unusual places? The poets, perhaps driven by the same blind evolutionary forces as our brain, have not explained. But two centuries ago, the English lyricist Samuel Taylor Coleridge hypothesized in his opium-tinged memoir Biographia Literaria (1817) that poetic language rearranges usual speech in order “to re-create.” If the poets had simply written “a blue flower,” we’d hurry on past, melding the flower into all the blue flowers that we’d seen before. But because the poets wrote “a flower blue,” our eyes see the flower in an original light, re-creating its beauty in our mind.

Psychologists have since confirmed that Coleridge was right: poetic phrasings release a brain-slowing burst of dopamine wonder that mingles our existing memories with a new mental perspective. The mingling breaks our prior habits of reading, defamiliarizing things that we’ve come to see as boringly ordinary, and inspiring us to see fresh details, fresh points of emphasis, fresh opportunities for discovery.

This poetic prompt for relearning can be found throughout One Hundred Years of Solitude. From the novel’s opening page, the prose bursts with unexpected phrasing: “A river of waters diaphanous” . . . “stones white and enormous, like prehistoric eggs” . . . “sparrow hands” . . . “the learned alchemists” . . . “the desperation of nails and screws.”

And this old invention isn’t just rediscovered by One Hundred Years of Solitude. It’s revolutionized too. 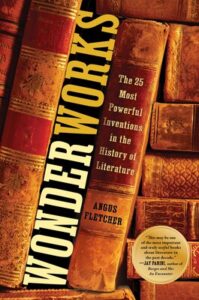 Angus Fletcher is a professor of story science at Ohio State’s Project Narrative, the world’s leading academic think-tank for the study of stories. He has dual degrees in neuroscience and literature, received his PhD from Yale, taught Shakespeare at Stanford, and has published two books and dozens of peer-reviewed academic articles on the scientific workings of novels, poetry, film, and theater. His research has been supported by the National Science Foundation, the Mellon Foundation, and the Academy of Motion Picture Arts and Sciences. He has done story-consulting for projects for Sony, Disney, the BBC, Amazon, PBS, and Universal, and is the author/presenter of the Audible/Great Courses Guide to Screenwriting.

How Contemporary Novelists Are Confronting Climate Collapse in Fiction 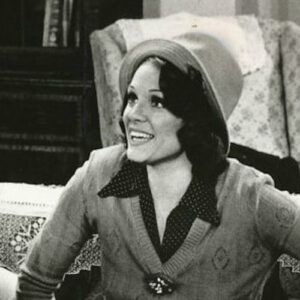 In the fall of 1948, a 49-year-old woman, the absolute prototype of a Jewish mother, marched into the Madison Avenue office...
© LitHub
Back to top
Loading Comments...