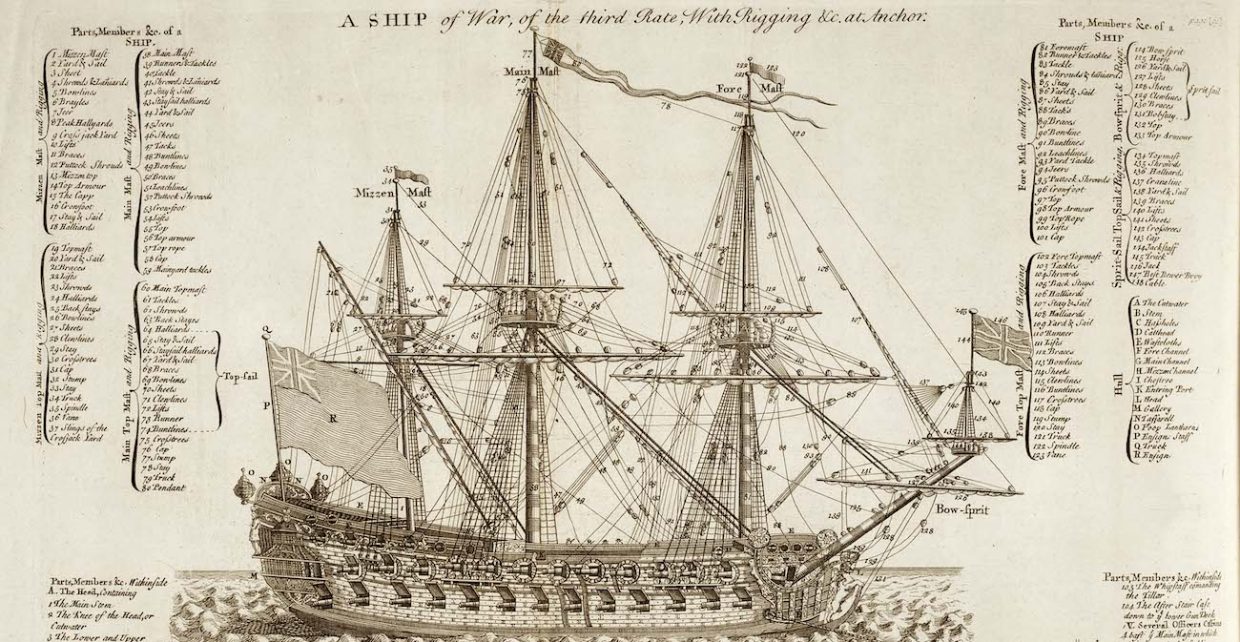 Pintle, Gudgeon, Chock: On the Rich, Wonderful (and Odd) Vocabulary of Sailing

Luis Jaramillo Heads to the Hudson for a Break From Writing

I approached my sabbatical as I approached most things in life, with dread. I was afraid I would waste the year, and before it had even started, I was afraid for it to end. The word sabbatical, perhaps not surprisingly, is related to “Sabbath,” the seventh day, the day of rest. Under the laws of Moses, the land lay fallow every seventh year, and it’s still the practice in many universities that professors work for six years, and then on the seventh they get an academic leave. For various reasons, it had taken me eleven years to get to my sabbatical, not counting the five years that I was working as a secretary and teaching as an adjunct. I didn’t believe that the sabbatical would ever happen, and when it became clear that I really was going to get a year off, I felt something like survivor’s guilt—who was I to deserve time off like that? I had to make a plan for myself so that I could make the most of the year.

When I talked to friends about the sabbatical, the most frequent question was, “Where are you going?” Everyone pretty much assumed that I’d be spending a significant amount of time in another country. But going away didn’t seem like a good idea. I had a book to finish, a novel set on the border of the US and Mexico, and I knew the kind of effort required to live abroad. I also knew I couldn’t write all day. I had to find a way to structure my time. I started volunteering with immigrants, accompanying them to hearings and helping them with asylum applications. And I started sailing, a more indulgent pursuit, not realizing how obsessed I’d get, how without leaving New York I’d end up learning a new language.

I’d sailed a bit as a kid and in college and I’ve always loved being in or on the water. There was a community sailing club near my apartment that I’d been meaning to check out for years, and after the first sail, I was hooked, trying my best to sail on the Hudson almost every day. It was thrilling to literally have a new perspective on a city that I’d lived in for 20 years, to see the city from the water that surrounded it, how when the currents and weather cooperated, the sailboat went fast, powered only by the wind.

But with sailing the conditions are rarely ideal. The current is too strong. There’s not enough wind, or there’s too much. The Hudson is a working river, full of ferries, giant barges, tug boats, cruise ships, Circle Line boats, and jet skis, vessels that need to be avoided and monitored. The sails need constant attention, adjustments to make up for shifts in wind direction. My usual low-grade anxiety was replaced by a feeling of being mentally and physically overwhelmed with new information. I quickly discovered that I’d forgotten pretty much everything I once knew, and what I did remember was incomplete, flawed.

I remembered that there was a knot called a bowline, and I recalled the mnemonic story used to teach people how to tie the knot—the fox follows the rabbit through the hole, around the tree, and then back through the hole again—but knowing the story didn’t mean I could actually tie it. I remembered that bowline was pronounced “bolluhn,” and that sailing words were often not pronounced as it seemed they should be, their Germanic and Middle English roots retaining a firm hold on them.

I remembered the terms port and starboard, though I will admit that for the first few weeks I couldn’t have told you with 100 percent certainty which was right and which was left. I knew that the big sail was the mainsail and that the smaller one in the front was the jib, but there were many more words that I had to learn, or relearn, the acquisition of language connected to the building of skills. This was an alternately frustrating and pleasurable process, the moments of feeling like I was finally grasping terms and principles were inevitably followed by moments that proved how vast my ignorance was. But I was determined to learn, and as fast as I could, studying my basic keelboat textbook, referring often to the glossary at the back.

I should say that there are plenty of sailing words that have no use in everyday English, like cringle, pintle, gudgeon, chock, and fairlead.

I kept being surprised by words and phrases we use in English all the time that appear to come from sailing. For example, telltales are pieces of string or fabric that stream back in the wind, signs that a sail is trimmed properly. The keel of a sailboat is a fin, made of lead, attached to the bottom of the boat. The keel keeps the boat from being pushed sideways by the wind and because it’s so heavy, it also keeps the boat from capsizing. It doesn’t prevent the boat from heeling, meaning to tilt to one side. You could say that when a boat is not heeling, when it is level, it’s even-keeled.

I started volunteering with the club’s after-school program, where public high school kids learn to sail and get academic credit for learning some math and science. I worked with 9th graders, initially passing out pens and helping to arrange tables and chairs, and then eventually acting as a skipper, taking out groups of kids on sailboats. During these sails, the boat would inevitably heel, and almost as inevitably, the kids would scream. “We almost died,” they liked to tell each other once we got back to land. Teenagers are not known for being even-keeled. We say someone is “at the helm,” to signify that they are in charge, but the term really means that someone is steering the boat. I noticed that if I put one of the kids on the helm, they became much more focused, no longer interested in chatting, and annoyed with their friends for trying to distract them.

To “learn the ropes” is a phrase whose meaning has been divorced from its origins. On a sailboat, ropes are so important for the control, stability, and securing of the boat that there are specialized words used to differentiate them, and to sail, you have to learn the meaning and the function of each rope. In nautical terms, ropes are generally called lines. A sheet, the line attached to the bottom corner of a sail, is different from a halyard, which is used to raise and lower a sail, which is different than a rode, the line attached to an anchor. The phrase “three sheets to the wind” has to do with a lack of control—imagine the lines that keep the bottoms of the sails tight being released, flapping wildly. The term jury-rig, as we all know, means makeshift, but I didn’t know before last year that the rig has to do with the cables and ropes that support the mast of the boat. The phrase “the bitter end” also has to do with ropes. When you get to the bitter end, the end of the rope tied to the boat, you’ve let out all the rope you have for an anchor.

Sometimes we say that we are going to take a new tack, meaning try a new approach. In a sailboat, it’s impossible to sail directly into the wind, so to make it to spot into the wind, you have to keep turning 90 degrees, or tacking, moving the sails across the midline of the boat, zigzagging toward your target. This is not unlike the forward progress of writing a novel, which requires many new tacks, like when in May of last year I had to rip out half of my book and write brand new stuff.

The phrase “batten down the hatches” is of an obvious origin. There are hatches on boats, and a batten is a strip of wood, in some cases used to lock the door to a hatch. The word hatch comes from the Old French word escoutille, or the Spanish escotilla, from which we get the word scuttle. To scuttle is to put a hole in the hull of a boat to sink it. Scuttlebutt, the word we sometimes use to mean gossip, is a metonym derived from the image of a scuttled “butt,” or the end of a cask that has had a hole put in it. On old sailing boats, this cask was the proverbial water cooler, the place where sailors gathered to talk shit.

I should say that there are plenty of sailing words that have no use in everyday English, like cringle, pintle, gudgeon, chock, and fairlead. Shrouds are not what you think they are. Sailing words are not always transferrable across languages. From an Israeli sailing friend, I learned that what in English we call the car on the traveler is called a horse in Hebrew. The cleat that holds the mainsheet is a bulldog because it looks like two eyes set on top of big round jowls.

To be unmoored is to be free from a pier or an anchor. To be rudderless is to be drifting, the rudder being the long flat piece of wood or other material stuck into the water at the back of the boat and used for steering. A hand is a sailor, so sailing a boat double-handed means that there are two people on board. To single-hand a boat is to sail it by yourself, but I never did that during my sabbatical.

I always sailed with other people, after my morning writing session, relieved to be part of a crew.

Luis Jaramillo is the author of The Doctor’s Wife, winner of the Dzanc Books Short Story Collection Contest, an Oprah Book of the Week, and one of NPR’s Best Books of 2012. Luis’s work has also appeared in Open City, Gamers, Tin House Magazine, H.O.W. Journal, and Red Line Blues. He is the Director of the Writing Program at the New School, where he is also co-editor of the journal The Inquisitive Eater: New School Food.

Let Us Now Praise... The Onion 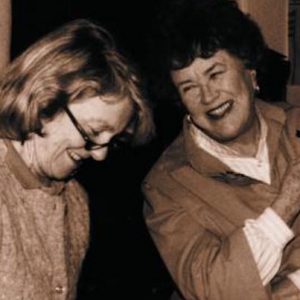 In May of 1948, a young woman named Judith Bailey embarked upon what was meant to be a three-week vacation in Italy and France....
© LitHub
Back to top